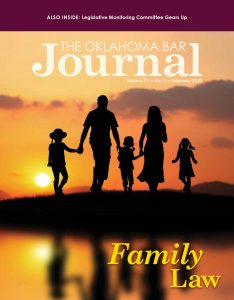 The Inconvenient Truths About Forums in Child Custody Proceedings
All family law cases start with a jurisdiction analysis, and a family law jurisdictional probe is often more complex than other types of civil litigation. The initial case review depends upon what is happening (e.g., original dissolution of the marriage action, paternity determination, post decree child custody modification, post decree child support modification, guardianship, adoption, international child abduction, etc.). If called upon to represent a client in a family law case, one must gather enough initial information to determine the nature/type of the pending family law proceeding.

For the Children: Indian Status Is a Political Classification
The Indian Child Welfare Act (ICWA) made headlines again in 2019. It was under attack, as usual, by those who have never been to Indian country, much less a tribal court proceeding. The primary culprit was not among the usual talking heads or lobbyists. Instead, Judge Reed O’Connor of the Northern District of Texas made national news by declaring ICWA unconstitutional in Brackeen v. Bernhart.1 That controversial decision is now subject to en banc review before the 5th Circuit Court of Appeals, which will decide whether Indian status under ICWA is an “impermissible racial classification.”2

Legislature Clears Up Surrogacy Questions in Oklahoma
Many Americans are unable to conceive and bear children naturally. This has led many to resort to becoming pregnant using artificial reproduction technology (ART). The most common form of ART is artificial insemination donor. This usually occurs when the mother is able to conceive and bear a child but the other parent, for one reason or another, is unable to have children.1 Matters become much more difficult when the intended mother is unable to conceive or carry a child to term. Thus, was born the concept of surrogacy.

Support of a Disabled Adult Child
We all know that a parent has a duty to support his or her minor child. This duty is clearly imposed in 43 O.S. §112(E), but what about an adult child? Can a parent be required to financially support a child who reached the age of majority? Not surprisingly, that answer depends.

Affidavit of Support Implications in Divorce
Being the spouse of a United States citizen is the most common way to attain lawful permanent resident status, informally referred to as “getting a green card.” Each year the United States Citizen and Immigration Services (USCIS) admits more lawful permanent resident statuses through marriage than any other major type of admission.1 In a country where nearly half of all marriages end in divorce,2 couples using marriage as grounds for obtaining a green card face special issues during their divorce and even after. Because Oklahoma has one of the highest divorce rates in the country, with as many as two out of every three marriages ending in dissolution,3 family lawyers should be especially aware of the implications that come through marriage-based immigration.

A Soldier's Rights and the Oklahoma Relocation Statute
Relocation of a parent or child is complex in any child custody case, however when relocation is a result of military duty, the issues are even more complex. The past two decades of deployments has caused legislators to take note and pass legislation to try to protect the custody and visitation rights of servicemembers across our country. Oklahoma has developed a wide range of laws to protect servicemembers in Oklahoma in custody and visitation disputes, but the battle to defend servicemember’s parental rights is not yet won.

A Client Intake Primer: International Child Removal or Retention
International disputes concerning a child’s residence may be subject to the Hague Convention on the Civil Aspects of International Child Abduction (Hague Convention) done at the Hague on Oct. 25, 1980, and its implementing legislation, the International Child Abduction Remedies Act (ICARA).1 The stated common purpose of the Hague Convention and ICARA is to protect children internationally from a wrongful removal or retention and to establish procedures for a prompt return to the habitual residence.2 It is a mechanism to prevent parents who are dissatisfied with custodial orders, directives or rights from abducting children, to seek more favorable treatment in another country.3 Contracting states are required to return the children without deciding anew the issue of custody.4