Many Americans are unable to conceive and bear children naturally. This has led many to resort to becoming pregnant using artificial reproduction technology 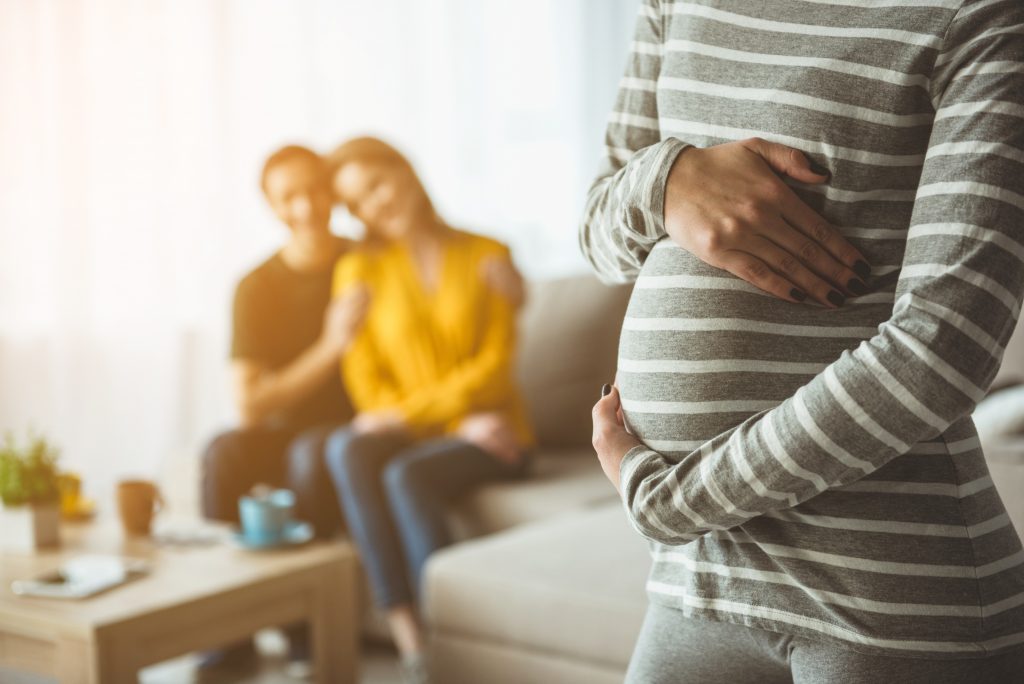 (ART). The most common form of ART is artificial insemination donor. This usually occurs when the mother is able to conceive and bear a child but the other parent, for one reason or another, is unable to have children.1 Matters become much more difficult when the intended mother is unable to conceive or carry a child to term. Thus, was born the concept of surrogacy.

Surrogacy is divided into two categories – gestational surrogacy and genetic surrogacy. Genetic surrogacy is when the father’s sperm is used to impregnate an egg from the woman who is to carry the child to term (the surrogate). This can occur either by artificial insemination or by in vitro fertilization. The resultant child is born by the surrogate and is genetically related to both the surrogate mother and the biological father. By agreement, the surrogate would be required to relinquish the child to the person who was intended to be the mother (usually the biological father’s wife). A relinquishment of parental rights on the part of the surrogate and an adoption by the intended mother would normally follow. This type of surrogacy has been controversial since the beginning. Many states, starting with New Jersey, found agreements providing for genetic surrogacy to be against public policy.2

Gestational surrogacy is generally defined as the sperm of the intended father being united with the egg of the intended mother with the resulting embryo being implanted in a surrogate who has no biological relationship with the child. It can be expanded so the sperm comes from an anonymous donor, the egg from an anonymous donor, fertilization is done in vitro and the resulting fertilized egg is implanted into the surrogate. Unlike basic artificial insemination, Oklahoma has no rules concerning surrogacy of either type. Because a surrogate is likely paid compensation for her services, the attorney general asserted that genetic surrogacy would violate the children human trafficking statute and therefore is illegal in Oklahoma.3

This year, the Legislature passed House Bill 24684 which provides a procedure by which gestational surrogacy can take place in Oklahoma.5 The process allows a court to approve a contract between intended parents who wish to have a child through gestational surrogacy and a surrogate to allow the surrogate to carry the child to term and relinquish the child to the intended parents.6 The statute is gender neutral and is applicable to same-sex couples, as well as opposite-sex couples.7

WHO ARE THE PLAYERS AND WHAT CAN THEY DO?
The statute contemplates a number of different people.8 There are donors who are the individuals who contribute the egg or the sperm. A gestational carrier is a person who agrees to become pregnant with a child. The carrier cannot have any genetic relationship to the resulting child. An intended parent is the person or persons who intend to become the lawful parents of the child being carried by the gestational carrier.

An intended parent can enter in a contractual arrangement with the gestational carrier for the carrier to become impregnated with a child conceived by artificial insemination and carried to term. If the agreement meets the requirements of the act then the court is required to approve it and the agreement is then legally enforceable.9

The parties must agree to exchange information during the pregnancy. Any eggs or sperm shall be from either the intended parent or a donor. The agreement must also disclose the identity of the physician who will perform the assisted reproduction. The physician must also inform the parties of the rate of successful conceptions and births attributable to the procedure, including the most recent published outcome statistics of the procedure at the facility at which it will be performed. The potential risks associated with the implantation of multiple embryos and consequent multiple births resulting from the procedure must also be disclosed along with the expenses related to the procedure. Further required disclosures include the health risks associated with fertility drugs used in the procedure, egg retrieval procedures and egg or embryo transfer procedures and reasonably foreseeable psychological effects resulting from the procedure. The agreement shall also identify who is responsible for the medical, legal and travel expenses associated with the gestational carrier arrangement.

The following terms may, but are not required to, be in the contract:14 the promise of the carrier to undergo all medical procedures recommended by the medical provider and the carrier’s agreement to refrain from activities that could harm the unborn child, including restraining from alcohol, tobacco and using nonprescription drugs;15 and the promise of the intended parents to pay a stipend to the carrier and to pay for certain expenses.

TIMING
The agreement must be validated by the court prior to the transfer of gametes or embryos to the gestational carrier.16 However, prior to validation, the carrier may begin a medical regime designed to increase fertility. Procedures for the retrieval of gametes from the intended parents or donor and the storage of the embryos may also take place prior to validation.

The court shall validate the agreement21 if it finds that it has jurisdiction over the parties and they have all met the requirements of the statute. The court must also find the medical evidence shows the intended parent is unable to carry a pregnancy to term, or it is medically unadvisable to give birth to a child. The court must also assure that each party has received legal advice and has voluntarily entered into the agreement and the surrogate has given birth to at least one child and the intended parents have made provision for the child’s guardianship if necessary.

The court may also validate an agreement that was not validated before the parties began the process of in vitro fertilization. If the court determines the gestational agreement does not meet the necessary requirements to be validated, it shall specify each deficiency that it found which prevents it from validating the agreement. The parties may amend the agreement to cure any other identified deficiencies and thereafter file an amended petition to validate the gestational agreement. The parties may amend as many times as necessary to cure any deficiencies identified by the court.

PARENTAGE DETERMINATIONS AND OTHER PROCEDURES22
Once the agreement has been validated, the child is to be considered as if it was the natural born child of the intended parents. The gestational carrier and her spouse have no parental rights.

It is possible that the resulting child may be related to the surrogate.23 If there is such an allegation, the court shall determine parentage by law other than this act.24 An allegation that the surrogate is the biological parent must be brought within 180 days.

AMENDMENTS AND TERMINATION25
A validated gestational agreement can be amended. However, an amended agreement must be re-validated by the court. The amendments may not change the identity of the gestational surrogate or any intended parent. Those changes can only be accomplished by terminating the agreement and entering into a new agreement.

A validated gestational agreement may be terminated but only if the specific statutory procedures are followed. The procedure requires the person seeking to terminate send notice to each party to the agreement. The notice of termination must then be filed with the court. The court, after determining that the surrogate is not pregnant by artificial insemination, must terminate the agreement. Once the court so orders the agreement is terminated.26

No party to a terminated agreement is liable for damages. However, termination does not relieve any party of the duty to pay for or to reimburse any other party for any medical, legal or travel expenses incurred pursuant to the gestational agreement prior to its termination which would otherwise be owed if the gestational agreement had not been terminated, and a party having a duty to pay or reimburse such expenses shall be liable to pay or reimburse such expenses.

A gestational agreement may not be terminated after the surrogate becomes pregnant.

COMPENSATION27
A surrogate may be paid a reasonable compensation for carrying the child. The amount must be negotiated in good faith between the parties. The amount of compensation may not be tied to the quality, or any genomerelated traits, of the sperm, eggs, gametes, embryos or resulting child. However, the compensation can vary depending on the number of embryos that are implanted, the number of assisted reproduction procedures undertaken in order for the gestational carrier to become pregnant, the number of children with which the gestational carrier becomes pregnant and the duration of the pregnancy.

The surrogate may also receive reimbursement for expenses and economic losses resulting from being a surrogate.

CLINICAL ERROR
Errors in artificial reproduction clinics do happen.29 If it turns out the child is not biologically related to either the intended parents, the egg donor or the sperm donor, the intended parents are still to be considered as the parents of the child unless a contrary determination is made by a court in an action brought by the genetic parent within 180 days.30

CONCLUSION
Like most states, Oklahoma did not have any laws on surrogacy until the passage of HB2468. It has now joined the list of states that have chosen to legalize and regulate gestational surrogacy. It was probably a constitutional imperative given that Oklahoma allows same-sex female couples to have a child. This bill provides the answer for same-sex male couples.32

Attorneys who plan to practice in the artificial reproduction area whether representing individuals or fertility clinics should read this act with a good deal of care.

ABOUT AUTHOR
Robert G. Spector is the Glenn R. Watson chair and centennial professor of law emeritus at the OU College of Law. He is an elected member of the American Law Institute and served as the Uniform Child Custody Jurisdiction and Enforcement Act reporter. He is the author of Oklahoma Family Law: Cases and Materials, Oklahoma Family Law: The Handbook and Oklahoma Family Law: Statutes and Rules Annotated and over 150 articles on family law.