Civics, Civility and Collaboration: Lawyers Can Lead the Way 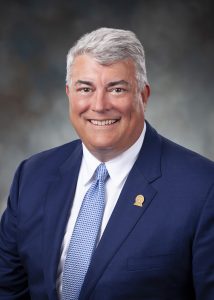 The practice of law has a way of confronting us with our insecurities and imperfections. For me, practicing law has been simultaneously painfully awkward, hilariously comical and immensely powerful. However witty we think we are, whatever memorable lines we employ in arguments or briefings to the court, we cannot escape moments of self-doubt. I jokingly say that my motto has been “often wrong, seldom in doubt.” In mediations and in courtrooms, agreeing to disagree is what attorneys do every day. While our society appears divided over numerous issues that manifest in the workplace, courtroom and in threats against law enforcement and judges, lawyers are uniquely positioned to lead the way in civility and collaboration. Our clients look to us for guidance on how to behave and how to handle the stress associated with legal issues and concerns. Those who decry a lack of civility in today’s social interactions need members of our organization to keep calm and uphold the rule of law.

The memorable opening scene of the Martin Scorsese film Casino, about early 1970s Las Vegas, shows a bomb blast engulfing the car of the character played by Robert DeNiro as he starts the ignition. Similar events occurred in Tulsa County. On Aug. 25, 1970, Tulsa County District Judge Fred Nelson was the target of an Election Day assassination attempt. As he turned the ignition switch of his blue station wagon, an explosion tore the front end of the car apart, throwing more than 20 pieces of shrapnel into him. The bombing took place in the driveway of his home, across the street from Edison High School. Judge Nelson survived the attack but was left critically injured. Presiding Judge Robert Simms issued strict rules requiring armed guards at the homes and in the courtrooms of Tulsa’s district judges. The Tulsa County Bar Association immediately posted a $25,000 reward leading to the arrest and conviction of the bomber. Judge Nelson returned to the bench Oct. 6, 1971, having been re-elected. A Tulsa native, he had been appointed in 1967 by Gov. Dewey Bartlett. His daughter, Jill Nelson Thomas, continues to be a member of the OBA.

As a grand jury was impaneled to investigate the bombing, even more shocking events filled the news. On Sept. 26, 1970, E.C. Mullendore III was beaten and shot to death in his Osage County home on the Cross Bell Ranch. His bodyguard, Chub Anderson (now deceased), claimed two intruders killed Mullendore, but Anderson continues to be a primary suspect. The story was the biggest murder case in the history of northeastern Oklahoma and remains unsolved to this day.

The Mullendore Murder Case, written in 1974 by Johnathan Kwitny, is a definitive account of the events surrounding the murder. As recounted in the book, Chub Anderson fled the Cross Bell Ranch after being shot himself and ran into a police officer who then drove Anderson to the Bartlesville hospital. On the way, Anderson told the officer that Mullendore had been shot by unknown intruders: “Chub said there were two men, one tall with a high forehead, gray haired and the other man was chunky and sort of curly-haired, dark …” Later, on page 327, Kwitny reports that Tulsa police received a tip from Cleo Epps, noted Tulsa bootlegger, that two men had come to Tulsa in the summer of 1970 looking to hire a professional killer. Osage authorities never got to question Epps as she disappeared in November 1970.

Among the primary suspects in the Nelson bombing were Albert McDonald and Tom Lester Pugh. Cleo Epps was said to have given McDonald access to dynamite she had buried on her farm. Incredibly, at the time, Oklahoma had no laws governing the sale of dynamite or explosives. Dubbed “Queen of the Bootleggers,” it was said that Cleo Epps controlled the moonshine traffic in several eastern Oklahoma counties during the 1940s and 1950s. According to the Tulsa Tribune article “Cleo Epps; Warm, Gentle Woman …,” Epps was very upset about the bombing, saying, “I never dreamed they’d do something like that … what if that little (Nelson) girl had gotten in the car with her daddy?” District Attorney S.M. “Buddy” Fallis Jr. persuaded Epps to appear anonymously before a grand jury investigating the bombing.

The “Queen of the Bootleggers” was last seen on the evening of Nov. 12, 1970, when she left a friend’s house with McDonald. Eight days later, her pickup truck was found in the parking lot of Union Square Shopping Center. It wasn’t until Feb. 24, 1971, that her body was discovered in a remote area near the Creek County line. The discovery occurred while the grand jury was continuing its investigation into the Nelson bombing. Three days earlier, the In Court Lounge, right across the street from the courthouse, was bombed. The proprietor theorized it was because grand jury witnesses had been “hanging around” there.

No trial ever occurred over the bombing, and the exact motivation was never established. In 1973, McDonald was charged with the murder of Cleo Epps. Due to the extensive publicity and tie-in with the bombing of Judge Nelson, the case was moved to Bryan County. McDonald was convicted and sentenced to life imprisonment but was murdered in prison on April 13, 1978. 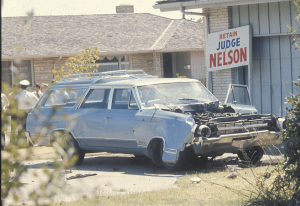 Tulsa County District Judge Fred S. Nelson was critically wounded in an August 1970 car bombing but later recovered and returned to the bench. Photo courtesy of the Tulsa World.

The next time you enter the courthouse and wait in line to pass through security, remember the “outlaw” days of days gone by. Remember that civics, civility and collaboration can lead us to a better association and society. As my year as president comes to an end, I am grateful to everyone who has provided support and guidance in each and every encounter. The incoming president, Brian Hermanson, and president-elect, Miles Pringle, will guide this organization to new heights. In closing, I ask you to reflect on those members who have brought you to this point in your legal career. I ask you to reflect on your own commitment to welcoming new, diverse lawyers into the fold of our organization. Each of us should dedicate our careers in law as a higher calling to achieve justice for all under the rule of law.

Tulsa County District Judge Fred S. Nelson was critically wounded in an August 1970 car bombing but later recovered and returned to the bench. Photo courtesy of the Tulsa World.