¶1 Appellant Travis John Hogner was charged and tried by jury for Feloniously Pointing a Firearm ( 21 O.S.Supp.2012, § 1289.16 ) or in the alternative Domestic Assault with a Dangerous Weapon ( 21 O.S.Supp.2014, § 644 ) (Count I); Possession of a Firearm, After Former Conviction of a Felony ( 21 O.S. Supp.2014, § 1283 ) (Counts II and III); Kidnapping ( 21 O.S.Supp.2012, § 751 (Count V); Interference with Emergency Telephone Call, misdemeanor ( 21 O.S.2011, § 1211.1 ) (Count VIII); and Domestic Assault and Battery, Second or Subsequent Offense ( 21 O.S.Supp.2014, § 644 ) (Count IX), all felonies were After Former Conviction of Two or More Felonies, in the District Court of Craig County, Case No. CF-2015-263. 2 In the first stage of trial, the jury found Appellant not guilty in Counts I, V, VIII, and IX. In the second stage of trial, the jury found Appellant guilty in Count II but not guilty in Count III. In the third stage of trial, the jury found Appellant guilty of two or more prior felony convictions and recommended a sentence of fifty (50) years imprisonment. The Honorable H.M. Wyatt, III, Associate District Judge, sentenced Appellant in accordance with the jury's recommendation. 3

¶1 Shaun Michael Bosse was tried by jury and convicted of three counts of First Degree Murder and one count of First Degree Arson in the District Court of McClain County, Case No. CR-2010-213. He was sentenced to death on the murder counts and to thirty-five (35) years imprisonment and a $25,000.00 fine for the arson count.

¶1 Appellant, Chad Derek Swanson, has appealed to this Court from orders of the District Court of Cleveland County, entered by the Honorable Jeff Virgin, District Judge, terminating him from drug court and sentencing him in accordance with the drug court contract in Case Nos. CF-2014-103 and CM-2014-2578.

117,179 – PAMELA CONLEY, Plaintiff/Appellee, v. ICOT HEARING SYSTEMS, LLC, a foreign limited liability company, Defendant/ Appellant. Appeal from the District Court of Tulsa County, Oklahoma. Honorable Rebecca Brett Nightingale, Trial Judge. This appeal arises out of the proceedings to enforce an Oklahoma Department of Labor ("ODOL") administrative Order of Determination ("Order") for unpaid wages by Pamela Conley ("Appellee"), against ICOT Hearing Systems, LLC ("Appellant"), her former employer.  Appellant appealed because Appellant contends the trial court abused its discretion when it denied Appellant's Motion and Alternative Petition to Vacate Judgment ("Motion to Vacate"). Appellee later commenced a counter-appeal, alleging the trial court erred as a matter of law when it failed to award attorney fees to Appellee under several state statutes. We find the trial court's denial of Appellant's Motion to Vacate did not represent an abuse of discretion. We also find the trial court did not err as a matter of law when it denied Appellee's Application for Attorney Fees. Therefore, we AFFIRM. Opinion by PRINCE, J.; GOREE, P.J., and MITCHEL, J., concurs.

118,053 – REBEKAH ANN HAWKINS, individually and as surviving spouse of CHAD TODD HAWKINS, deceased. Appeal from the District Court of Grady County, Oklahoma. Honorable Kory Kirkland, Trial Judge. The issues in this appeal involve certain trial conduct of counsel, the admissibility of the toxicology results regarding the decedent and also the admission of opinion testimony concerning an ultimate issue in the case that was offered first by the investigating officer and later by the Defendants' expert accident reconstructionist. The appeal arises out of litigation that was initiated by the Appellant, Rebekah Ann Hawkins, individually and as surviving spouse of Chad Todd Hawkins, deceased ("Hawkins"), who sought damages stemming from a fatality collision between a commercial tractor-trailer and a motorcycle.  At the  conclusion of the trial, the jury returned a comparative negligence verdict.  The jury determined Chad Hawkins' negligence to be greater than Defendant Bryan Lake's ("Lake") negligence (70% and 30% respectively). We find that the trial court's decision to deny Plaintiffs Motion for Mistrial was an abuse of discretion. We, therefore, reverse and remand this case for a new trial. Opinion by PRINCE, J.; GOREE, P.J., and MITCHELL, K., concurs.

118,028 — Terracom, Inc., Yourtel America, Inc., and Skycom USA, LLC, Plaintiffs/Appellees, vs. Clowers Communications, LLC, Defendant/Appellant.  Appeal from an order of the District Court of Oklahoma County, Hon. Trevor S. Pemberton, Trial Judge, by Defendant Clowers Communications, LLC (CC), after a jury verdict in favor of Plaintiffs YourTel America, Inc., TerraCom, Inc., and SkyCom USA, LLC, and its award of attorney fees and costs to Plaintiffs in this breach of contract case.  CC claims that portions of the subject contract are ambiguous and others are unambiguous.  “Whether a contract is ambiguous so as to require extrinsic evidence to clarify the ambiguity is purely one of law for the court, and the construction of an unambiguous contract is a matter of law for the court.”  Ferrell Constr. Co., Inc. v. Russell Creek Coal Co., 1982 OK 24, ¶ 9, 645 P.2d 1005 (footnotes omitted).  “The only question concerning the sufficiency of the evidence is whether there is any competent evidence to sustain the verdict.”  Fowler v. Lincoln Cnty. Conservation Dist., 2000 OK 96, ¶ 14, 15 P.3d 502.  Applying this standard of review, we will not disturb the jury’s findings of fact where any competent evidence reasonably supports the findings.  CC further asserts, “Because Plaintiffs breached the contract by terminating the agreement prematurely, they should not have been deemed prevailing parties and should not have been awarded a judgment for costs and attorney’s fees.”  The jury resolved the question of prevailing party in Plaintiffs’ favor, finding that CC breached the contract, not Plaintiffs.  Having concluded that the jury’s verdict in Plaintiffs’ favor is supported by competent evidence and that Plaintiffs prevailed on their breach of contract claim and defeated CC’s breach of contract counterclaim, we reject CC’s argument that Plaintiffs are not prevailing parties.  Competent evidence supports the jury’s verdict.  We affirm both the trial court’s judgment on the jury verdict and its award of attorney fees and costs.  AFFIRMED.  Opinion from the Court of Civil Appeals, Division II, by WISEMAN, P.J.; BARNES, J., and THORNBRUGH, J., concur.

Tuesday is the OBA (virtual) Day at the Capitol

It might not come with lunch this year at the Oklahoma Bar Center, or involve a trip across the street to see the renovated State Capitol and visit elected officials, but the 2021 (virtual) Day at the Capitol offers a compelling program and two FREE hours of CLE. The online program is Tuesday, March 23 from 9 a.m. to 11:20 a.m. The program will open with an introduction from OBA President Mike Mordy, feature a helpful tutorial on tracking bills through the legislative process from Legislative Committee Chair Miles Pringle and a review of bills involving the judiciary from Cleveland County District Judge Thad Balkman. The morning will wrap up with Dick Pryor, general manager, Public Radio KGOU and Shawn Ashley, news director eCapitol News. They are from the Capitol Insider, the popular weekly podcast and radio feature on KGOU and will offer a legislative review for OBA members. Click here to register for the FREE two-hour CLE program. 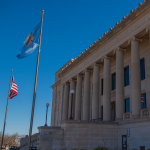 The Oklahoma Judicial Nominating Commission (JNC) consists of 15 unpaid volunteer members. Of the 15 members, only six members are lawyers. Lawyer commissioners are elected by their fellow Oklahoma Bar Association members, each representing one of six congressional districts across the state, as they were in 1967 when the commission was established.* They each serve a 6-year term. Elections are held each odd-numbered year for members from two districts. In 2021 there will be elections for members in Districts 5 and 6.

TO MEMBERSHIP IN THE OKLAHOMA BAR ASSOCIATION

NOTICE OF HEARINGS ON PETITION FOR REINSTATEMENT 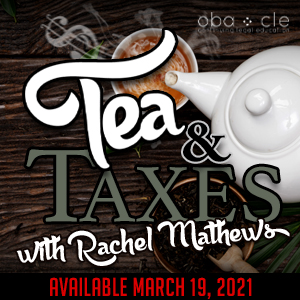 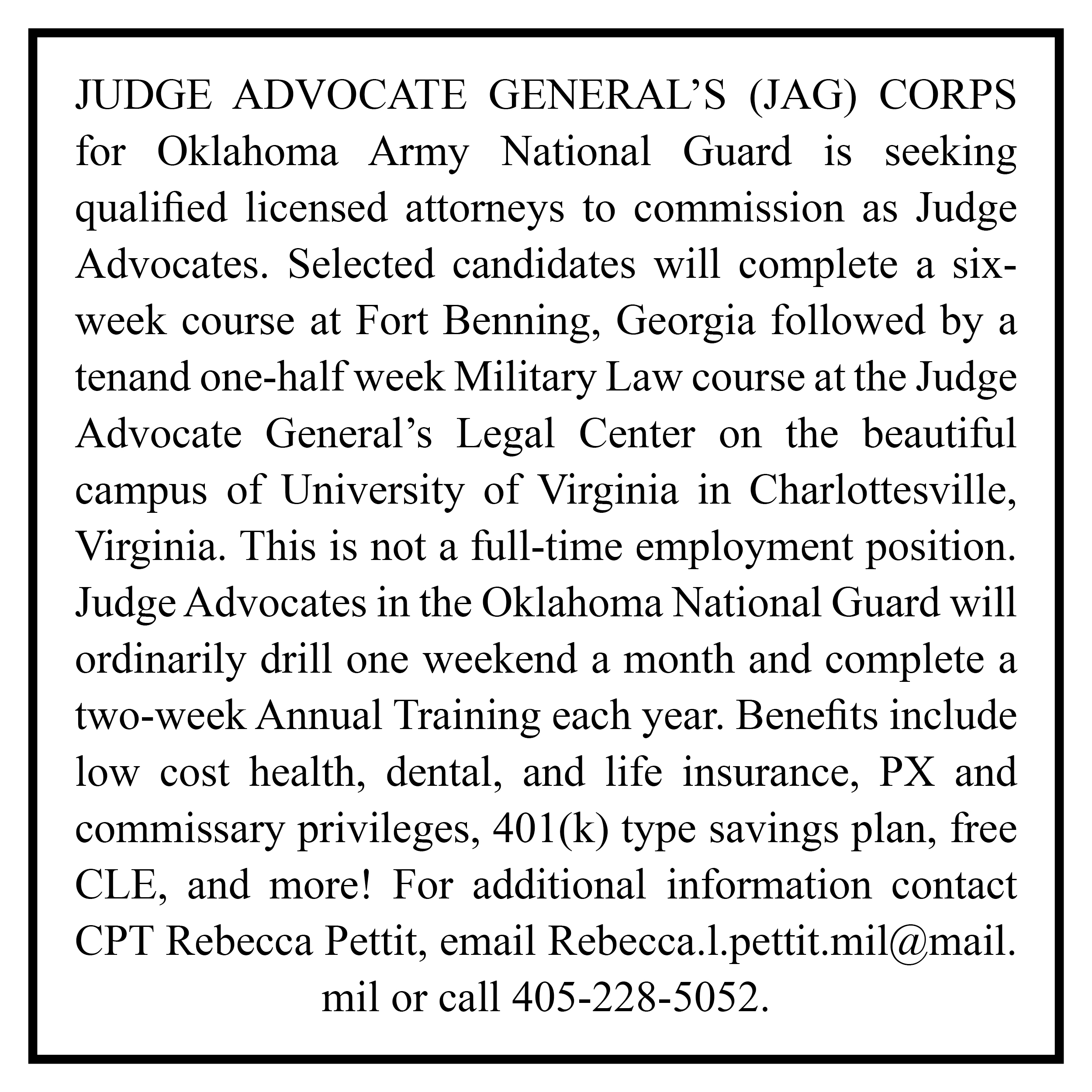 Lawyers are trained to consider the negative implications of anything new. When the idea of chatbots on law firm websites first surfaced, many were concerned about the potential for malpractice liability based on poor advice from a chatbot. But giving legal advice is not something your law firm would ever want a chatbot to do. Read more. 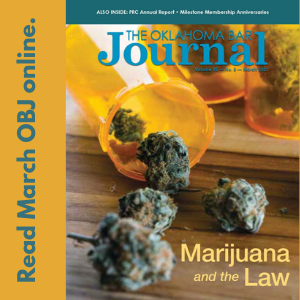 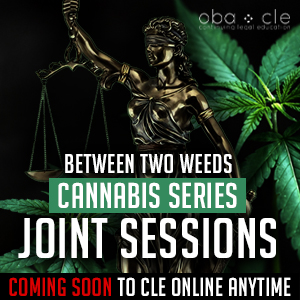