Election results will be announced at the Young Lawyers Division November meeting to be held in conjunction with the OBA Annual Meeting in Oklahoma City November 10-12, 2021. 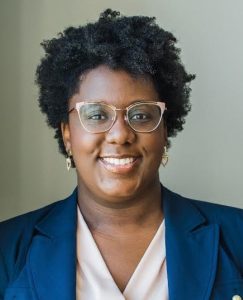 If you are like me, you have spent countless hours scrolling memes and social media posts about the “outside opening back up.” The phrase is meant to provide comic relief, but it really is quite strange to think just a year ago, we were quarantined in our homes and unable to spend time with our loved ones. In addition to the separation from my friends and family, one restriction I found difficult was my inability to attend networking events and serve the community.

I was recently able to interact with fellow colleagues as the OBA YLD met in person after more than a year of virtual meetings. During the meeting, we dedicated much of our time to brainstorming community service projects. We determined our first course of action will be to schedule meetings with school superintendents in order to identify high school events YLD members can attend. Ultimately, our goal is to help educate students regarding important legal topics. We also pledged to volunteer this month at a drive-through wills event hosted by Oklahoma Indian Legal Services. To say we are excited about jumping in feet first would be an understatement!

Although OBA YLD has commenced in-person meetings, the American Bar Association (ABA) has implemented a hybrid model for the 2021 Annual Meeting. The conference, which is scheduled for Aug. 4-10, includes a combination of virtual and in-person events. ABA YLD events such as the general assembly, “Day Party Open Mic,” and 5K will all be conducted virtually. I am excited about attending a conference with so many interactive virtual events!

JOIN OUR TEAM
Many of my colleagues have expressed that although they enjoy the intellectual challenges associated with the practice of law, they feel most fulfilled when utilizing their time and skills to empower those who are voiceless. Members of the YLD have committed to lead with a servant’s heart. This includes advocating for a wide array of individuals in our community and participating in events such as those described above.

Every lawyer who was first admitted to the practice of law in any jurisdiction within the past 10 years is automatically a member of the YLD. This means you have an open invitation to each and every YLD meeting, community service project and social event. Should you desire to serve as a representative for your district and lead by example, I encourage you to apply for the YLD Board of Directors.

NOMINATING PROCEDURE
Article 5 of the division bylaws requires that any eligible member wishing to run for office must submit a nominating petition to the Nominating Committee. The petition must be signed by at least 10 members of the OBA YLD and must be submitted by the deadline set by the Nominating Committee chairperson. A separate petition must be filed for each opening, except a petition for a directorship shall be valid for one-year and two-year terms and at-large positions. A person must be eligible for division membership for the entire term for which elected.

ELECTION PROCEDURE
Article 5 of the division bylaws governs the election procedure. In September, a list of all eligible candidates will be published in the Oklahoma Bar Journal. Ballots will be emailed Oct. 1 to all YLD members at the email address in the official OBA roster. All members of the division may vote for officers and at-large directorships. Only those members with OBA roster addresses within a subject judicial district may vote for that district’s director. The members of the Nominating Committee shall only vote in the event of a tie. Please see OBA YLD Bylaws for additional information at www.okbar.org/yld/bylaws.

DEADLINE
Nominating petitions, accompanied by a photograph and bio (in electronic form) for publication in the OBJ, must be received by Nominating Committee Chairperson Jordan L. Haygood at jordan.haygood@ssmhealth.com no later than 5 p.m. Friday, Aug. 13.

Results of the election will be announced at the YLD meeting at the OBA Annual Meeting Nov. 10-12 at the Sheridan Hotel in Oklahoma City.

TIPS FROM THE NOMINATING COMMITTEE CHAIRPERSON

Ms. Moaning practices in Oklahoma City and serves as the YLD chairperson. She may be contacted at aprilmoaninglaw@gmail.com. Keep up with the YLD at www.facebook.com/obayld.

Treasurer: Any member of the OBA YLD Board of Directors may be elected by the membership of the division to serve in this office.

Secretary: Any member of the OBA YLD Board of Directors may be elected by the membership of the division to serve in this office.

BOARD OF DIRECTORS
Board of Directors members serve a two-year term.

At-Large (Rural): Any county other than Tulsa County and Oklahoma County