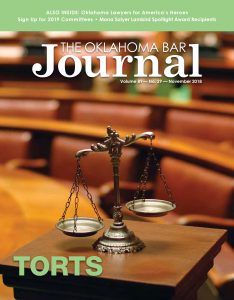 Dilly, Dilly and Liability, Really
On Oct. 24, 2017, the Oklahoma Supreme Court decided Boyle v. ASAP Energy, Inc.1 and held that “Oklahoma recognizes a cause of action when a commercial vendor of alcohol sells alcohol to a noticeably intoxicated person for consumption off the premises…”2 This decision significantly broadened the traditional rule for dram-shop liability first established in Brigance v. Velvet Dove Restaurant3 which held that “one who sells intoxicating beverages for on the premises consumption has a duty to exercise reasonable care not to sell liquor to a noticeably intoxicated person.”4

The Unique Problems of a Tort Within a Tort
This article examines an important question of tort law – specifically, it asks who within our system of Oklahoma jurisprudence has the power to determine the value of a tort claim with personal injury undertones. For the run-of-the-mill meritorious civil case on the jury trial docket, the answer is straightforward – the jury.1

Statutory Contribution in the Era of Several Liability
The Legislature’s abolition of joint and several liability for fault-based actions has been one of the most significant “tort reform” measures in Oklahoma.1 Prior to the 2011 amendment of Title 23, Section 15, a tortfeasor remained jointly and severally liable for all damages caused by multiple tortfeasors where the plaintiff was fault-free, the tortfeasor’s percentage of fault exceeded 50 percent, the tortfeasor was guilty of reckless or willful and wanton misconduct or the plaintiff sued on the state’s behalf.2 The 2011 amendment3 makes at-fault tortfeasors liable for the amount of harm they cause, and only that amount, regardless of the fault of others. Gone are the days where a negligent tortfeasor can be forced to pay for the damages caused by another whose concurrent negligence also harmed the victim.4

Civil Liability of Parking Valets and Their Employers Under Oklahoma Law
On Oct. 8, 2012, Thyce Colyn was severely injured when a car driven by a parking valet collided with Mr. Colyn when he was riding his bicycle. The court ruled the valet’s employer, Standard Parking, was fully liable, and a jury awarded Mr. Colyn over $38 million.1

Tort Litigation for the Rising Prison Population
In June of this year, studies revealed that Oklahoma now leads the planet with the world’s highest incarceration rate of 1,079 per 100,000 people.1 The study identifies Oklahoma’s incarceration rate far above the national average and considerably exceeding other stable democracies in the world.2 Approximately 28,000 Oklahomans reside inside state and private prisons alongside an additional 8,900 in local jails.3 An additional 28,000 citizens are outside prison but under the supervision of the Department of Corrections.4

Protecting the Settlement Recovery: Planning Options for Settlement Recipients and Their Attorneys
Personal injury attorneys often feel a desire to focus on their next case once the present case settles, but the financial decisions arising at the end of a case can affect the client for years into the future and are generally too much for the client to handle alone. Additionally, missing the opportunity to help with the financial, lien resolution and government entitlement (Medicaid, SSI, Medicare and SSDI) issues arising in personal injury settlements can result in unsatisfied clients, malpractice claims and ethics violations.1 These risks are not merely academic. In State ex rel. Oklahoma Bar Assn. v. Friesen, an Oklahoma attorney was disbarred for mishandling and failing to properly establish a structured settlement on behalf of a client.2