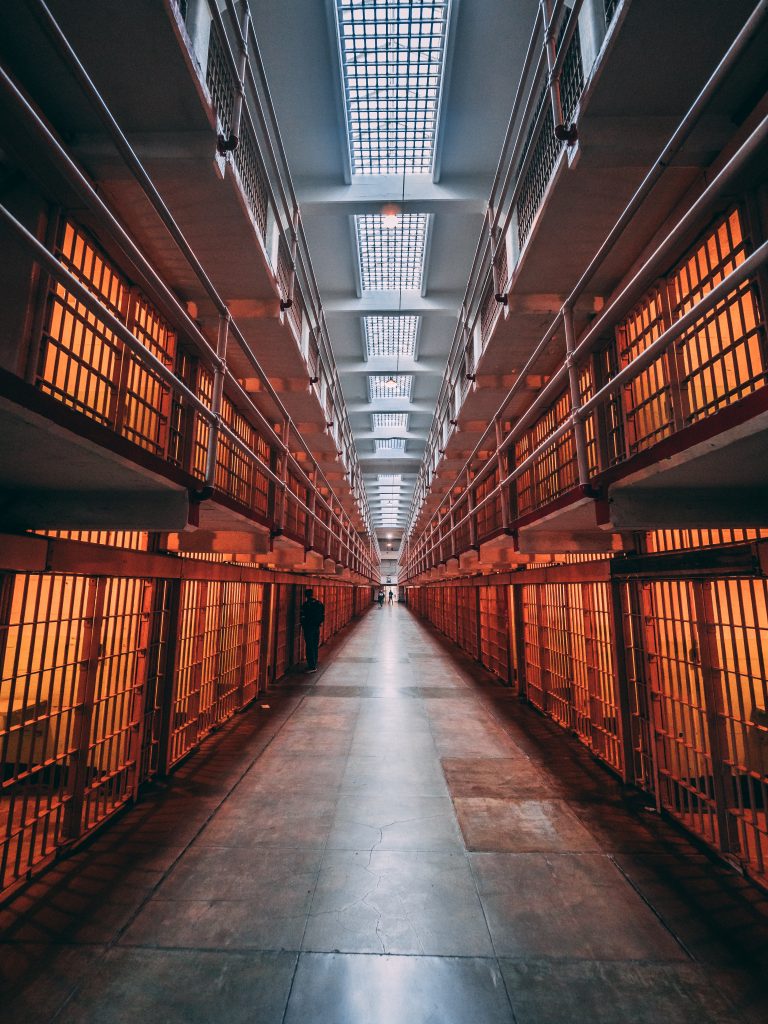 In June of this year, studies revealed that Oklahoma now leads the planet with the world’s highest incarceration rate of 1,079 per 100,000 people.1 The study identifies Oklahoma’s incarceration rate far above the national average and considerably exceeding other stable democracies in the world.2 Approximately 28,000 Oklahomans reside inside state and private prisons alongside an additional 8,900 in local jails.3 An additional 28,000 citizens are outside prison but under the supervision of the Department of Corrections.4

Some trends regarding the incarcerated are alarming; for instance, Oklahoma incarcerates more women per capita than any other state.5 Incarceration rates in Oklahoma continue to climb despite the fact that over the last 20 years, the violent crime rate and property crime rate have both dropped significantly.6 The explanation for the still rising incarceration rate over the same course of time involves drug possession offenses.7 Further, the length of the prison stay for nonviolent offenses is 80-100 percent longer than the national average and sentences for drug offenses twice the length of national averages.8

OKLAHOMA’S UNDERFUNDING OF ITS CONSTITUTIONAL PROMISE
On average across the United States, it costs $33,274 per year to house an individual inmate; however, Oklahoma only spends $16,497 per year, ranking third from the bottom by narrowly outspending Alabama and Louisiana.9 In 2017, Joe Allbaugh, director of the Department of Corrections, declared that the Department of Corrections operates over its capacity and needed over $1 billion more than its current $612 million budget allows.10 Allbaugh indicated that “When you think about one in 80 Oklahomans is incarcerated or under supervision, you know somebody who’s in prison, or you love somebody who is ... [q]uestion is, how we are going to address it?”11

The unspoken reality from these concerns is that Oklahoma contributes less than half the national average on the following necessary objectives: 1) adequate levels of security; 2) program and administrative staff to run facilities; 3) food and programming for the incarcerated citizens; 4) infrastructure maintenance and upkeep; and 5) health care for the rising inmate population. Expressing concern over this troubling truth, Allbaugh said to reporters in a December 2017 article that “[w]e are not a listing ship ... We are a sinking ship.”12 In his closing thought to the article, Allbaugh noted that “if the state doesn’t demonstrate that they can handle their prison population in a safe and humane way, what are inmates supposed to do? They’re going to sue.”13 Due to Oklahoma’s prisons holding the sixth highest mortality rate (second highest in accidental deaths and homicides),14 and due to the dramatically higher amount of deaths in county jails, the number of suits likely will keep rising.

THE STATUTORY BLOCKADE OF THE COURTHOUSE
While Allbaugh’s conclusion may be true, the actual process of successfully accessing the courthouse against an Oklahoma prison or jail remains fraught with hurdles and hazards. For instance, Title 12 Okla. Stat. §95 requires that “[a]ll actions filed by an inmate or by a person based upon facts that occurred while the person was an inmate in ... custody ... shall be commenced within one (1) year after the cause of action shall have accrued.”15 Additionally, the Oklahoma Governmental Tort Claims Act (OGTCA) exempts from liability any claim based upon the “[p]rovision, equipping, operation or maintenance of any prison, jail or correctional facility, or injuries resulting from the parole or escape of a prisoner or injuries by a prisoner to any other prisoner.”16 Further, even though private prisons are hard-pressed to prove immunity under the OGTCA, suing a private prison contractor still requires notice under OGTCA.17 Title 57 also mandates exhaustion of administrative and statutory remedies before filing pleadings.18 Failure to do so may result in dismissal with prejudice.19

The statutory exemption for §155(25) is “all inclusive for tort claims.”20 Courts have held that §155(25) immunizes prisons and jails from a wide array of inmates’ tort claims, including claims for personal injuries from other inmate’s negligent operation of a chain saw,21 a slip and fall injury,22 failure to provide medical treatment,23 negligence by prison guards in their removal of a prisoner’s handcuffs and leg irons24 and using strip searches and assault and battery.25 Due to the broad-reaching language of the Medina decision,26 the terms “provision,” “equipping,” “operation” and “maintenance” encompass most every situation a state law claim could be founded upon in a jail or prison making jails and prisons functionally off limits to lawsuits under state common or statutory law. Unfortunately for those injured in jails or prisons, the remaining remedies are limited.

UNEASY ALTERNATIVES AND UNSETTLED LAW
A plaintiff may still individually maintain a claim against an individual tortfeasor so long as they allege the act was done outside the scope of employment.27 Doing so drastically affects liability under respondeat superior and, in some situations, kneecaps the most likely possibility for a solvent defendant. Regardless, proving the alleged conduct to be “outside the scope of employment” is easier said than done with prisons and jails. The Oklahoma Supreme Court noted that governmental employees such as police officers (whether on duty or off duty) may be acting within the scope of their employment even during conduct such as striking arrestees, physically and verbally attacking customers of a private business, causing a car accident or injuring detainees/arrestees, thus subjecting their employers to liability.28 With the goal of immunity in mind, it does not seem difficult for a defendant to claim that their ill-advised acts were in the scope of their employment.

That leaves only two realistic options for plaintiffs: pursuing a federal claim under 42 U.S.C §1983 and/or a state constitutional claim under Bosh v. Cherokee Cty. Bldg. Auth., 2013 OK 9. Both scenarios remain overwrought with their own sets of practical limitations.

For §1983 claims, a municipality cannot be held liable under §1983 on a respondeat superior theory.29 Instead, proving municipal liability requires a showing that the chosen policy would have inevitably led to constitutional injury. Additionally, compared to simple negligence claims, many §1983 causes of action require evidence of “deliberate indifference” to a known constitutional right.30 “Deliberate indifference is a stringent standard of fault, requiring proof that a municipal actor disregarded a known or obvious consequence of his action.”31 Deliberate indifference can be satisfied by evidence showing that the defendant “knowingly created a substantial risk of constitutional injury.”32 Should a plaintiff survive that feat, evading dismissal under qualified immunity remains a complex and difficult hurdle of its own. Suffice it to say, §1983 will not become easier for plaintiffs to navigate. The only hope aside §1983 for citizens in prison remains pursuing a state constitutional claim.

Bosh torts have an entirely different complexity: uncertainty. The genesis for a claim under the Oklahoma Constitution began gaining traction in the 2002 Oklahoma Supreme Court case, Washington v. Barry.33 There, the Oklahoma Supreme Court established that a prisoner in a penal institution has the right to recover for the use of excessive force by prison employees if the “force applied was so excessive that it violated the prisoner’s right to be protected from the infliction of ‘cruel and unusual punishments’ under the state and federal constitutions.”34

Thereafter, the Court of Civil Appeals crafted two opinions regarding inmates and the Oklahoma Constitution. First, in Bryson v. Oklahoma County ex rel. Oklahoma County Det. Ctr.,35 the Oklahoma Court of Civil Appeals sensibly determined that if prisoners had a constitutional right to be free from excessive force under Okla. Const. Art. II, §9 so too did pretrial detainees. The court identified the source of that right as Okla. Const., Art. II, §30.36 Second, in Edelen v. Bd. of Comm’rs of Bryan Cty,37 the Oklahoma Civil Court of Appeals extended this analysis to denial of medical care claims under Art. II, §9.38 In Edelen, an inmate awaiting transfer to the Oklahoma Department of Corrections became sick and later slipped on the floor thereafter breaking his elbow due to a leaking sewer system that overflowed into his cell floor.39 The inmate filed a claim under the OGTCA, was denied and subsequently filed suit based on Okla. Const. Art. 2, §9 for denial of medical care as a “cruel and unusual punishment.” The District Court dismissed the Oklahoma Constitutional claim under 12(b)(6) grounds and the Court of Civil Appeals reversed and indicated that “relief is possible’ based on these allegations” after applying federal due process analysis to the state constitution.40

The Oklahoma Supreme Court only addressed one of these decisions in the Bosh case: Bryson v. Oklahoma County. In Bosh, the Supreme Court of Oklahoma addressed the beating of a pretrial detainee by jail employees that resulted in spinal fractures. Under the OGTCA, no liability existed yet the assault and battery by jail officers clearly violated Okla. Const., Art. II, §30. The Supreme Court held that the Oklahoma Constitution therein recognized a private cause of action for damages for excessive force under Art. II, §30.41

After Bosh, the most substantial decision covering the limits of the Bosh holding came in Perry v. City of Norman,42 where the Oklahoma Supreme Court explained that a “Bosh claim” is limited to those circumstances where a cause of action under the OGTCA is unavailable. After, the Oklahoma Court of Civil Appeals developed two significant published and precedential case law interpreting the Bosh decision further. In GJA v. Oklahoma Dep’t of Human Servs.,43 the Court of Civil Appeals Division IV found that Bosh is not to be limited to its facts and specific holdings and stands for the proposition that the Supreme Court recognizes a broader scope of actionable claims based upon violations of constitutional rights.44 The GJA decision heavily influenced a Division II decision in Deal v. Brooks.45 There, the court reversed a summary judgment dismissal of a claim against DHS under Art. II, §7, Oklahoma’s due process clause. The court there recognized a private cause of action against DHS on behalf of children in state custody when DHS employees make placement decisions in conscious disregard of known safety risks for the child.46 The court in Deal indicated it is now “established precedent” that Oklahoma refuses to “construe the OGTCA as providing blanket immunity” where doing so would render a citizen’s constitutional protections as “ineffective” or a “nullity.”47

Federal courts have been split about how far the Bosh holding can reach. Some have favorably applied Bosh in numerous contexts besides excessive force in prisons and jails.48 Other courts have expressed reluctance to extending Bosh beyond its holding.49 Without further guidance from the Oklahoma Supreme Court, some of these courts will remain reluctant and unwilling to recognize an expanded Bosh claim.50 Unfortunately, this split leaves a great uncertainty for plaintiffs in jail settings searching solutions to the injuries they sustain. Currently, plaintiffs only sure private cause of action for an Oklahoma constitutional violation lies with a claim of excessive force.

CONCLUSION
The Oklahoma Supreme Court’s courageous decision in Bosh provided a logical limit to all-inclusive prohibition for tort claims against jails and prisons in the context of excessive force. Unfortunately, it is not just beatings that our prisoners have to fear. As a reminder, many of the people suffering from these constitutionally offensive injuries are nonviolent offenders forced to serve sentences higher than the national average. Many members of the bar, myself included, know these citizens as more than just our clients. They are often our family, friends, neighbors and colleagues. Surviving Oklahoma’s justice system involves far more hazards and now more than any other time in our state’s history those family members, friends and neighbors under incarceration need more protection for their constitutional rights. As time goes on, we can only hope for more clarity and certainty in the form of those protections or (more simply) for the hope that the Legislature will sensibly rewind its exemption from liability for prisons and jails.

ABOUT THE AUTHOR
Andrew Casey graduated from the OU College of Law in May 2015 and practices at Foshee & Yaffe in Oklahoma City. He is a 2017-2018 graduate of the OBA Leadership Academy.