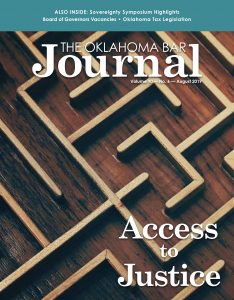 The Work of the Oklahoma Access to Justice Commission
This inspiring phrase is displayed on our United States Supreme Court building and is a promise which runs throughout our Constitution and other documents and writings of our founders. Historically, our American system of justice has been viewed as a leading model of fairness and efficiency. With rare exceptions, our courts have been remarkably free of outside influence and corruption. Our founding fathers strove to create an independent judiciary and the principal of equal justice under law, but is it a promise we have kept?

The Oklahoma County Courthouse Access Clinic
As the director of the Oklahoma County Courthouse Access Clinic, I routinely witness the desperation of people walking the halls seeking legal help. It is common for a pro se litigant to wander the courthouse hallways asking for help from anyone that “looks” like a lawyer. These brave souls go from clerks and bailiffs to the law library trying to solicit any legal advice while being turned away with only a packet of paperwork often with outdated instructions. If the litigant even makes it to the courtroom, more often than not they leave with no resolution to their matter.

Certified Courtroom Interpreters
The language used in the courtroom can be confusing and difficult to understand, and ordinary words or phrases often have unexpected meanings. Lawyers often use a unique combination of legalese, acronyms, idioms and sports metaphors. For persons who are limited English proficient (LEP), having meaningful language access during their day in court can be challenging.

Addressing the Court Reporter Crisis in Oklahoma
A court reporter has the important role of protecting and preserving evidence and testimony and delivering an accurate record of the events in a legal proceeding. In Oklahoma, all court reporters must be certified by the State Board of Examiners of Certified Shorthand Reporters and approved by the Supreme Court of Oklahoma.1 The standards are high, as the profession requires significant levels of skill and technical expertise.

The Online Multidoor Courthouse
In 1976, Harvard Law professor Frank Sander delivered a speech at the National Conference on the Causes of Popular Dissatisfaction with the Administration of Justice (now usually referred to as the Pound Conference) titled “Varieties of Dispute Processing.” In his speech, professor Sander envisioned a future justice system that could direct parties into appropriate pathways customized to the particulars of their dispute. Though he didn’t title this concept the “multidoor courthouse” in his remarks, the name (coined later by a journalist) eventually stuck, and it has become central to the theory and practice of dispute resolution. Professor Sander wondered aloud in his speech whether the “courts of the future” (in particular, courts around the year 2000) might help to screen incoming complaints, matching each dispute with its most appropriate form of resolution.

Tips on Delivering Limited Scope Legal Services
Limited scope representation (LSR) is not only a tool to expand access to justice, these arrangements can also be a viable and profitable business model for lawyers, allowing them to provide their services in what is clearly an expanding marketplace.

The Crushing Reality of Why We Need Plain Language Pro Se Court Forms
When asked how to address the ever-growing access to civil justice crisis, most of you, Oklahoma’s lawyers, will say something to the effect of “more lawyers,”“more legal aid” or “more pro bono.” To be clear, I am a proponent of those solutions too –more engaged, active lawyers and lawyering is critical to the success of the profession. However, lawyers alone cannot solve the crushing problems facing our civil justice system.

2019 Oklahoma Tax Legislation
The following is a summary of some of the changes in Oklahoma law on state taxation enacted by the Oklahoma Legislature in the 2019 session of the Legislature.