The Back Page | Oklahoma Lawyers: More Than Meets the Eye 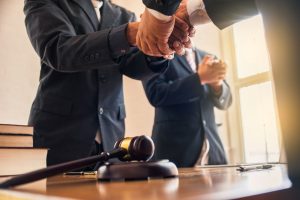 Goodwill Industries of Central Oklahoma is celebrating 85 years of helping people overcome challenges to employment, and attorney Bob Burke and I thought it was time to capture that history in a book. So that’s what we’ve done. More Than a Store tells the story of how Goodwill overcame obstacles and setbacks to eventually become a thriving nonprofit, employing 700 people from Stillwater to Ardmore and assisting homeless veterans, job seekers, the disabled and those with criminal backgrounds trying to get a foot on the ladder of success. You can see why the book is titled More Than a Store.

If you’re like most people, you probably only knew about Goodwill’s retail thrift stores. And that’s my point. There is more to Goodwill – and more to all of us – than meets the eye.

Like my good friend Reggie Whitten. Many lawyers only know Reg as a formidable opponent in a civil lawsuit. He’s been involved in precedent-setting litigation, and I had the privilege of trying cases with him in his early days. But what many don’t know is that Reg has a heart for the forgotten and forsaken. Like orphans in Uganda. Those handcuffed to drug addiction. Native American young people who need inspiration to pursue science. Most of Reg’s work is done behind the scenes. When you’re across the deposition table or the courtroom from him, all you see is a lawyer who gives you fits because of his strategies and talents. But Reg is more than a trial lawyer.

There is more to Goodwill – and more to all of us – than meets the eye.

The same can be said about my friend Bob Burke. Bob is a remarkably talented attorney with an enviable win-loss record. He, like Reggie, probably gives opponents fits because of his ability to make persuasive arguments. But Bob is so much more. Bob has written more historical nonfiction books than anyone else in history – 130 at last count! He has been an advisor to governors, a member of three halls of fame, and he gets up at 4 a.m. to write books before practicing law. He gives his time and money liberally to nonprofits, and he is a genuinely likable and funny man. A while back Bob told me, “I thought about running for governor, but my wife told me if I did, I’d be runnin’ as a single man!”

Oklahoma lawyer Jim Priest is president and CEO of Goodwill Industries of Central Oklahoma. He will serve as keynote speaker at the Delegates Breakfast held during the OBA Annual Meeting on Nov. 12.