Since 1996, Spotlight Awards have been given to five women who have distinguished themselves in the legal profession and who have lighted the way for other women. In 1998, the award was named to honor the late Mona Salyer Lambird, the first woman OBA president, and one of the award’s first recipients. The award is sponsored by the OBA Women in Law Committee. Each year, all previous winners nominate and select the current year’s recipients. A plaque bearing the names of all recipients hangs at the Oklahoma Bar Center in Oklahoma City.

This is the 25th year of award presentations. Recipients were honored during the Women in Law Conference held Oct. 1 in Oklahoma City. 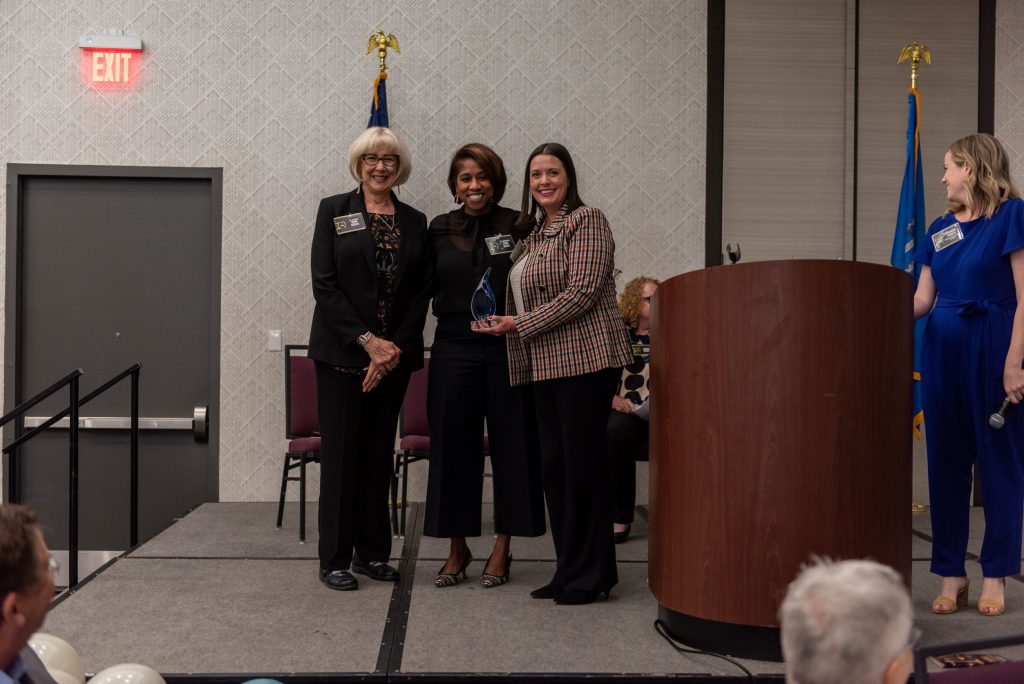 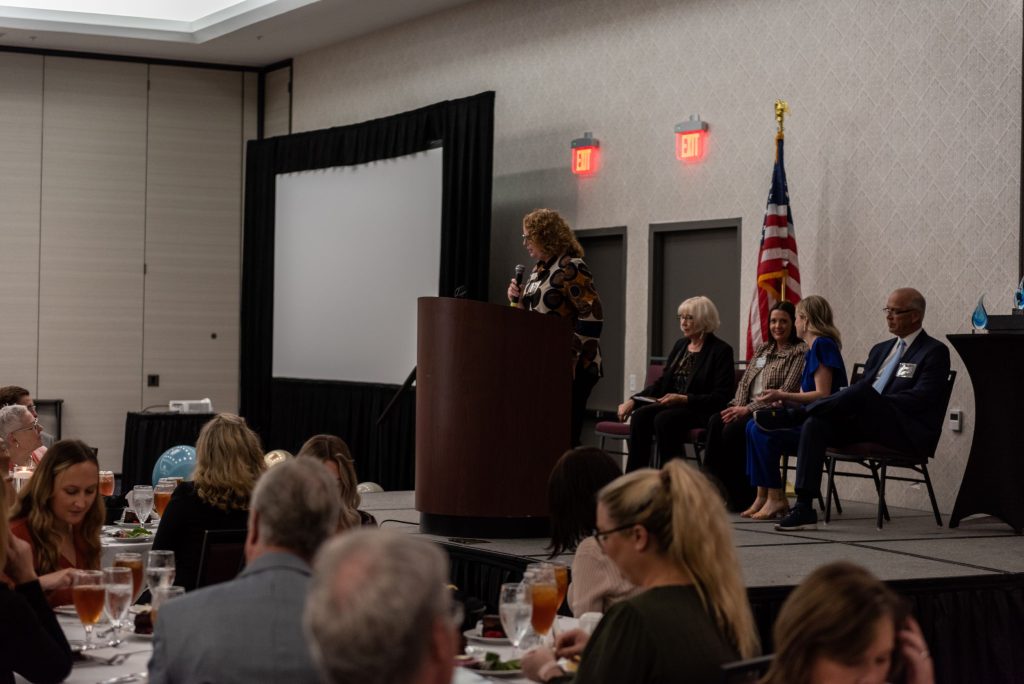 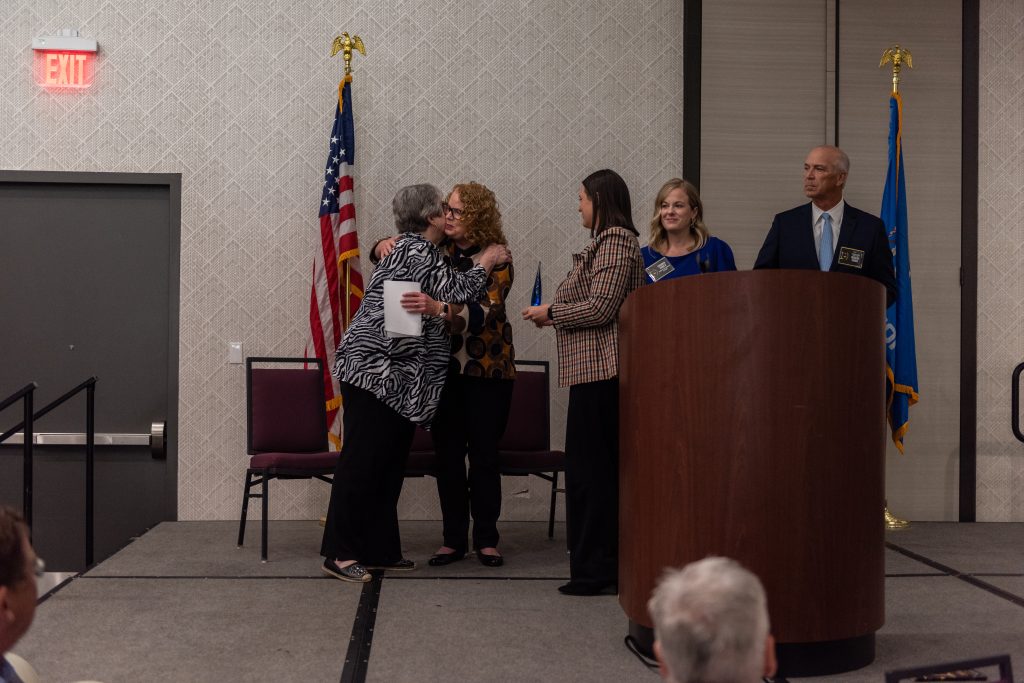 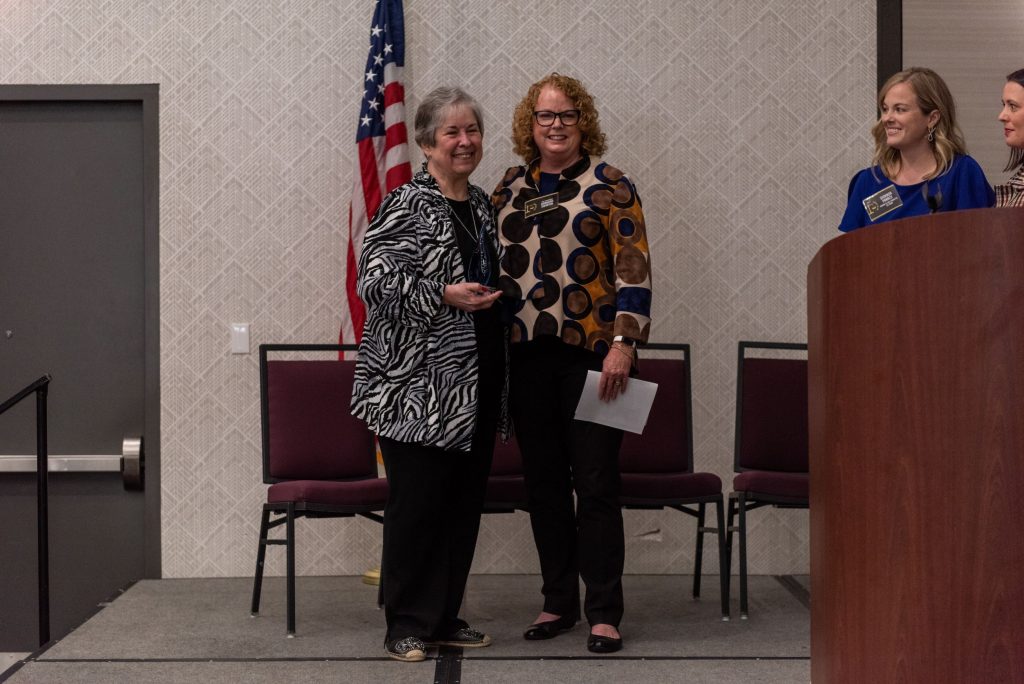 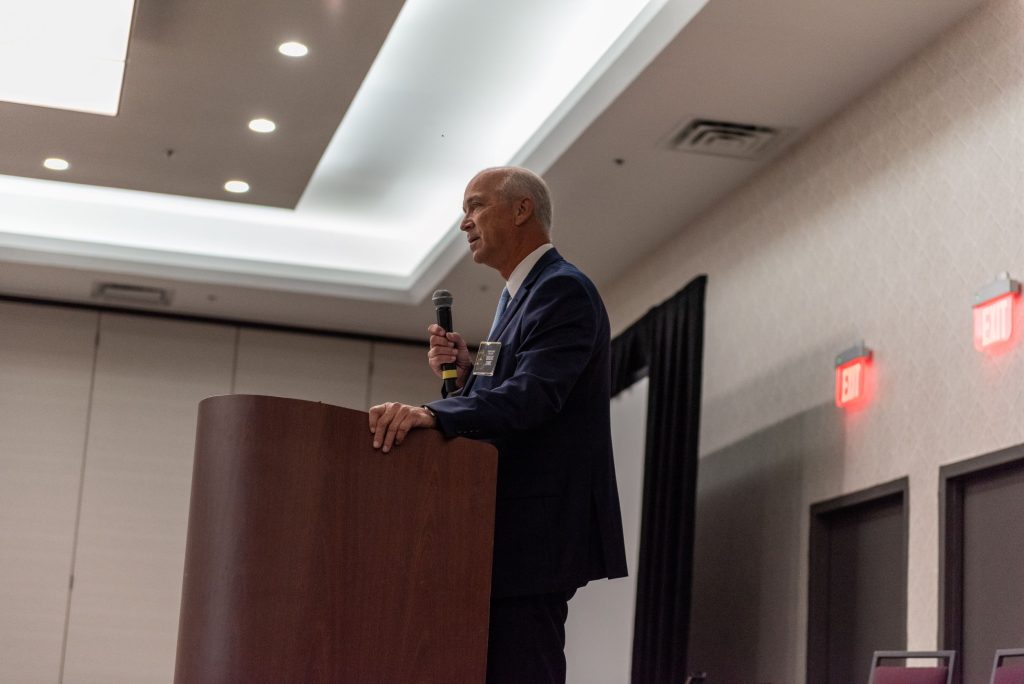 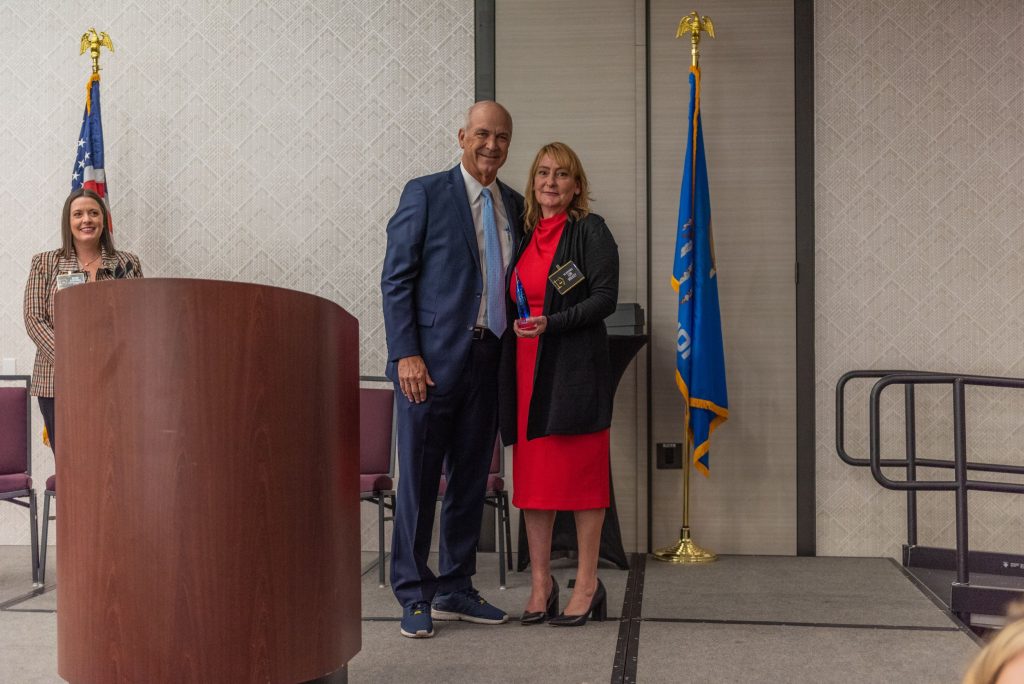 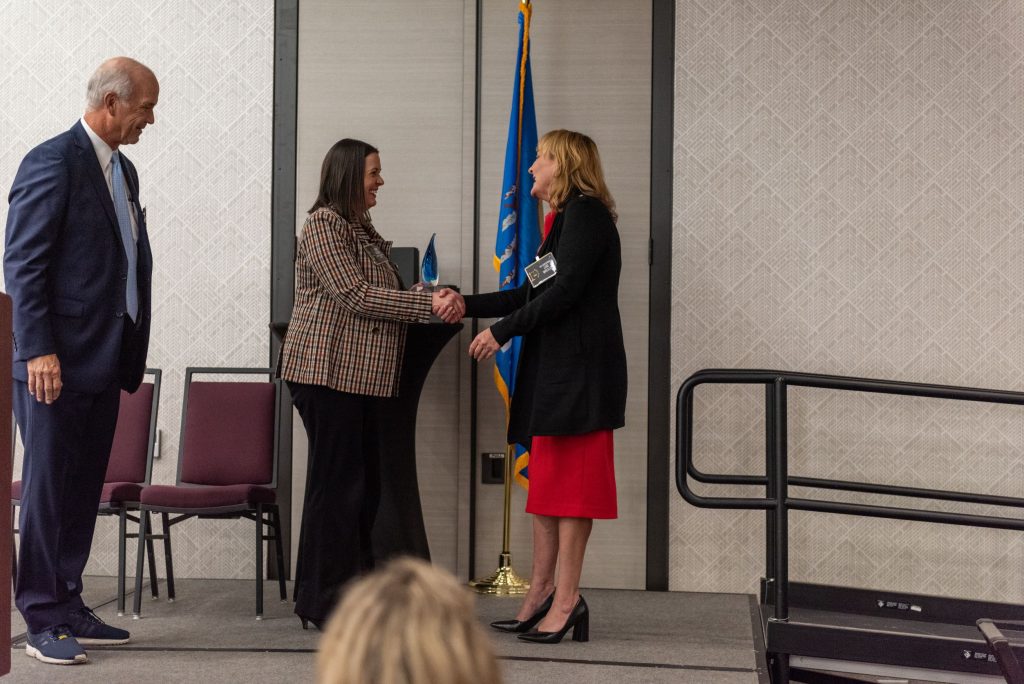 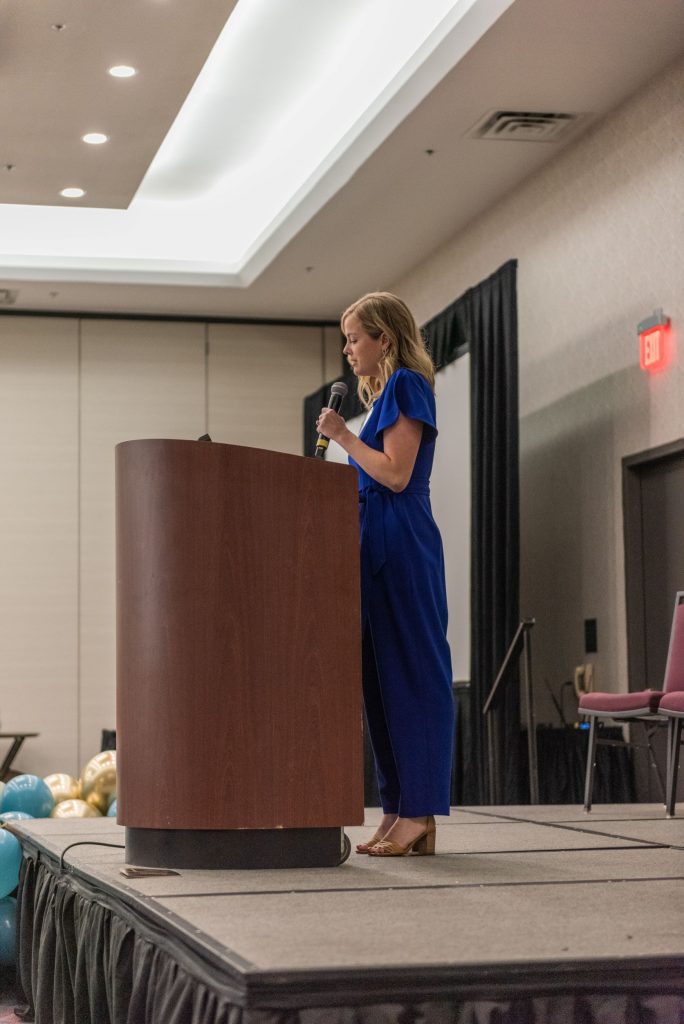 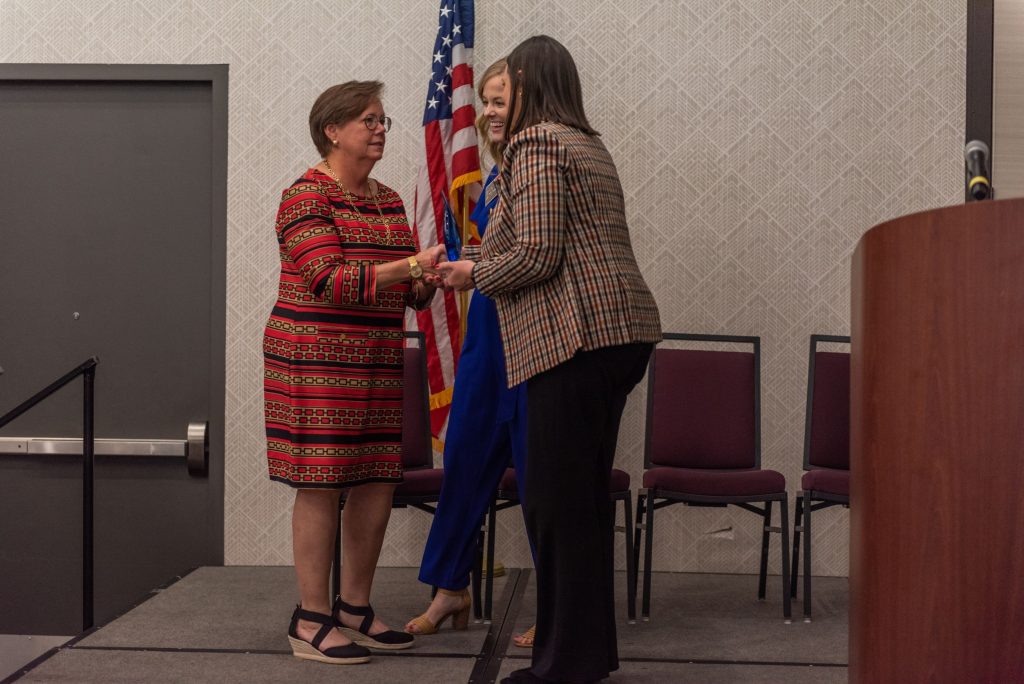 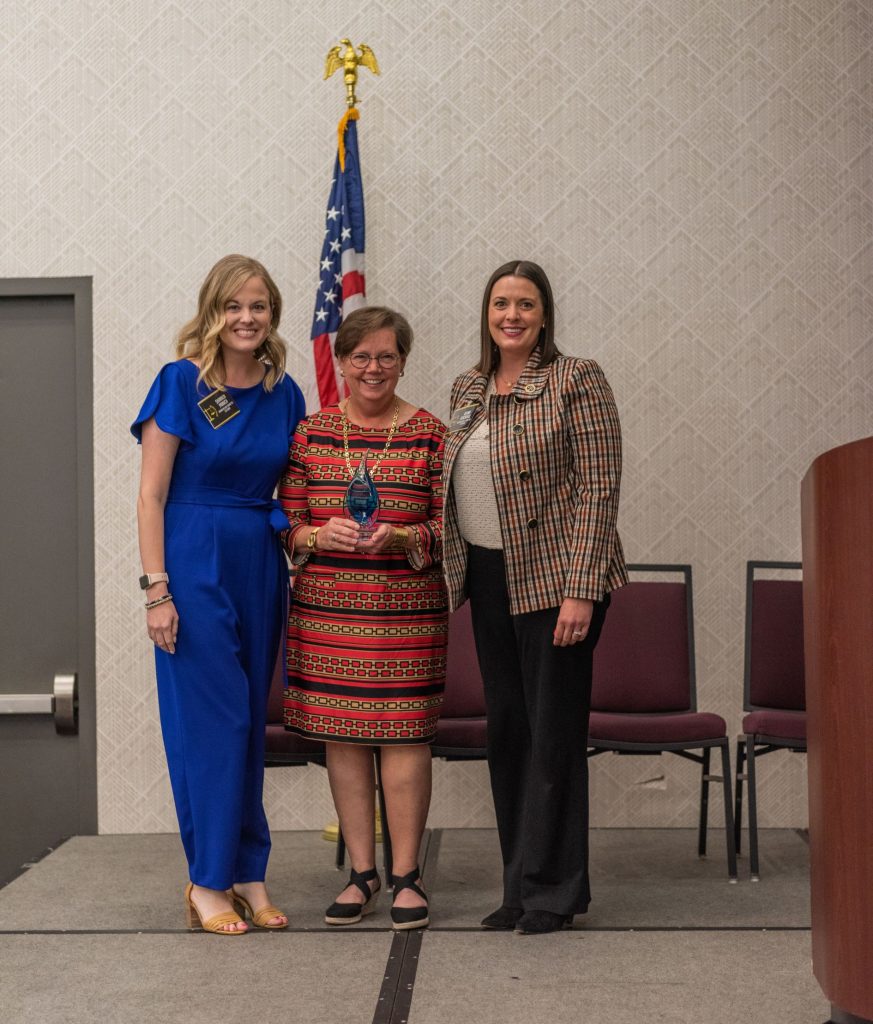 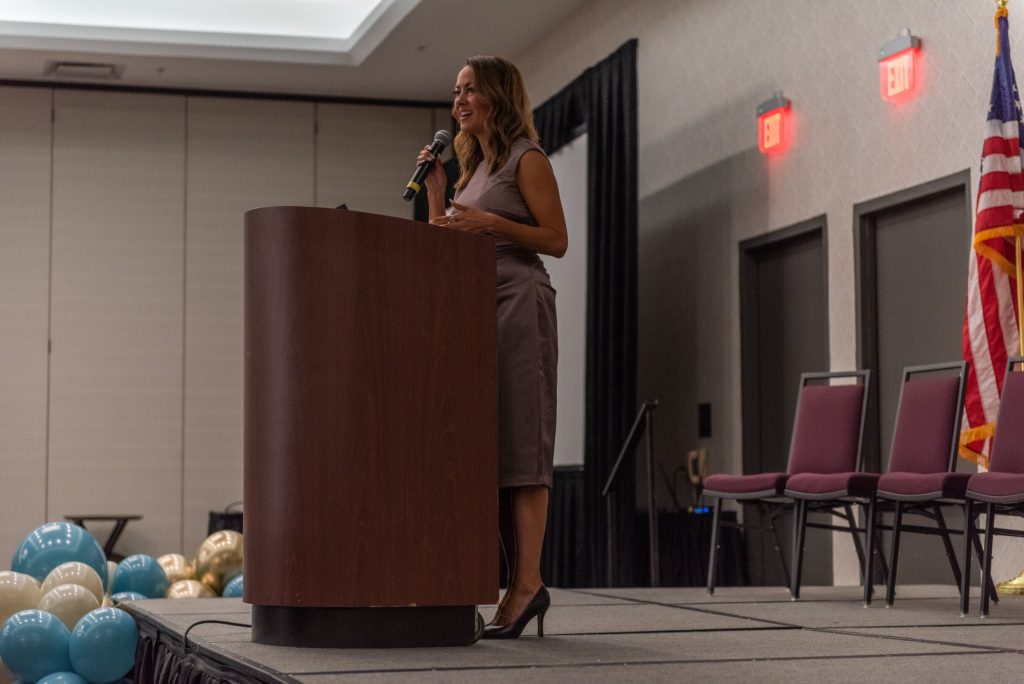 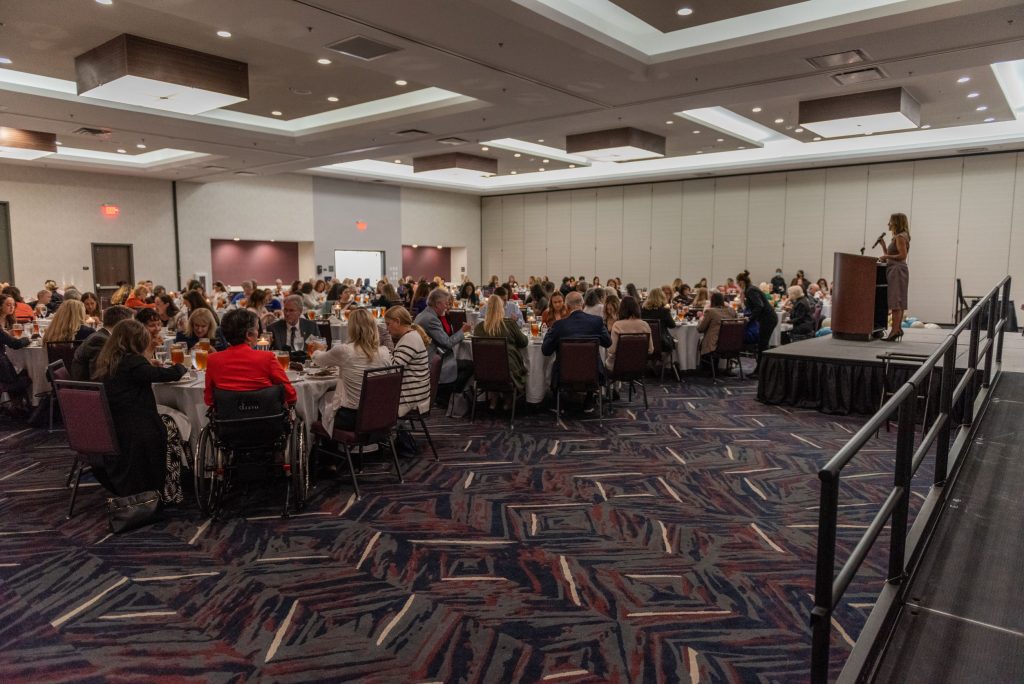 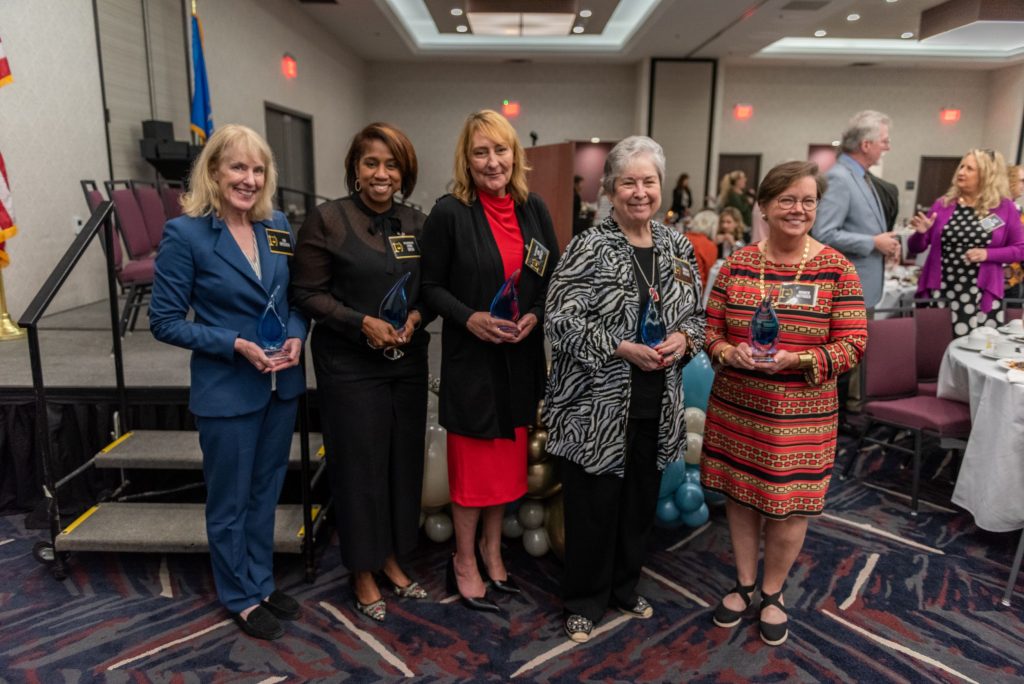 Lyn Entzeroth served as dean of the TU College of Law for more than six years before stepping down July 31, 2021, to return to the classroom. During her time as dean, enrollment of first-year law students rose, tuition revenue increased and scholarship funding grew.

She led the college through improved programming and expanded clinical offerings, including the creation of the Terry West Civil Legal Clinic, funded through a generous gift from the Sarkeys Foundation; the Buck Colbert Franklin Legal Clinic to aid residents in the Greenwood and north Tulsa communities; and the Public Defender Clinic in partnership with the Tulsa County Public Defender’s Office. Impressive new faculty members, who are changing the landscape of legal education, also were added to the college.

Ms. Entzeroth joined the TU College of Law faculty in 2002. Previously, she practiced law in Washington, D.C., and Oklahoma. She also clerked for the Oklahoma Court of Criminal Appeals and the U.S. District Court for the Western District of Oklahoma. Before taking the helm on July 1, 2015, Lyn served as associate dean of academic affairs and associate dean for faculty development at TU Law.

She teaches courses on capital punishment, constitutional law and criminal procedure. Her primary research is in the field of capital punishment and federal habeas corpus litigation, and among her works is the co-authored casebook Capital Punishment and the Judicial Process (4th ed.). She received her bachelor’s degree from the University of Wisconsin and her J.D. from Tulane University School of Law.

Judge Lydia Y. Green was appointed to the 7th Judicial District, state of Oklahoma, Oklahoma County on Feb. 13, 2017, as a special judge. She has served as a special judge in the Juvenile Court and has presided over deprived and delinquent dockets as well as the Family Treatment Court since that time. Born and raised in the great state of Texas, Judge Green earned her bachelor’s degree in biology with a minor in chemistry from Texas Tech University and her J.D. from the OCU School of Law in 2003. Prior to taking the bench, Judge Green was in private practice where she focused primarily on the areas of family law, juvenile law and criminal defense. Simultaneously, she served as the staff attorney for the Metropolitan Fair Housing Council of Oklahoma Inc., where she worked in the area of civil rights by serving as an advocate for victims of housing discrimination. While there, she worked closely with the U.S. Department of Justice and the U.S. Department of Housing and Urban Development.

Judge Green has served as an OCU School of Law Executive Board member since 2016 and currently serves on the Metropolitan Fair Housing Council of Oklahoma Inc. Executive Board. She is an active member of the Robert J. Turner Inn of Court and serves on the Oklahoma Judicial Conference Executive Board having the privilege to serve as the Diversity Committee co-chair. From 2014-2017, she served as vice president of the Association of Black Lawyers Inc. and in 2018 was honored to receive the Ada Lois Sipuel Fisher Diversity Award from the OBA Diversity Committee. Having previously volunteered with Oklahoma Lawyers for Children as well as the Habitat for Humanity Selection Committee, Judge Green is a member of the illustrious Delta Sigma Theta Sorority Inc. She is an active member of her church and truly loves her family, fur babies, good food, shoes, shopping and traveling.

Roma M. McElwee retired in 2017 after 22 years on the bench serving the District Court of Oklahoma County. She graduated from OU in 1968 with a bachelor’s degree in drama. She attended the OCU School of Law and received her J.D. in 1974. During law school, she worked at two different law firms, got married and had a child.

From February 1976 to June 1982, she served Oklahoma County as an assistant district attorney, an assistant public defender, then back to the District Attorney’s Office. From 1980 to 1982, she was the chief assistant district attorney in the Juvenile Division. She was a sole practitioner in private practice for over 13 years. Her practice focused primarily on family law. However, she handled a variety of different types of cases.

During her legal and judicial career, she taught at seminars for the county and state bar associations. She attended the National Judicial College, in Reno, Nevada, for the first time in the summer of 1996. Several years later, she was asked to be a facilitator during the General Jurisdiction Course that was held twice a year. She volunteered her time and did that work at the National Judicial College for more than 10 years. She always enjoyed teaching, helping and mentoring new judges and new lawyers.

She was married to a teacher and coach, William M. McElwee, for 40 years before he died in July 2011. She is very proud of their one and only daughter, Michele.

Judge Lori Walkley is the mother of three amazing daughters, Lyndsey (32), Faith (26) and Madelyn (19). In addition, she is blessed by her long-time love, Dave Stockwell, to count his daughters MacKenzie (33) and Madison (31) and their beautiful children Weston (6), Jack (4) and Berkley (1) as family as well. Her passions are her family, her dogs and OU football, generally (but not always) in that order!

Judge Walkley has been a district judge serving the 21st Judicial District since 2003. She has always had a mixed docket with civil, felony and family case assignments, handling well over 40,000 cases thus far. In addition, Judge Walkley was honored to be appointed as a special judge to the Oklahoma Court of Criminal Appeals and a special justice to the Oklahoma Supreme Court. She is currently the chairperson of the Council on the Interstate Compact on Adult Offender Supervision and a member of the Appellate Division of the Oklahoma Court on the Judiciary.

During her tenure on the bench, Judge Walkley has served as president of the Presiding Judges Assembly, president of the Oklahoma Judicial Conference and served several terms as the chairperson of the conference’s Education and Bench Book committees. In addition, she is a former presiding judge of the Oklahoma Court on the Judiciary, Trial Division and vice-presiding judge of the Oklahoma Court on the Judiciary, Appellate Division. Judge Walkley also served for over a decade on the executive board of the Oklahoma Dispute Resolution Advisory Board. She is an avid instructor of continuing legal education in Oklahoma and across the country, and she serves as a faculty member of the National Judicial College in the areas of case management and death penalty law. To date, Judge Walkley has provided court specific case management curriculum to courts in Fulton County, Georgia; Harris County, Texas; Pima County, Arizona; Las Vegas County, Nevada; San Francisco County, California; and Mecklenburg County, North Carolina. Judge Walkley was named the Outstanding Family Law Judge in 2014 by the OBA Family Law Section and 2005 Judge of the Year by the Oklahoma Department of Human Services, Child Support Enforcement Division.

Prior to being appointed to the bench, Judge Walkley practiced family law and civil litigation at the firms of Benedum and Walkley; Bernstein and Walkley; and Durbin, Larimore & Bialick. During her practice of law, she served as Cleveland County Bar Association president, OBA MCLE Commission commissioner, Oklahoma Bar Journal associate editor, Norman Children's Rights Commission commissioner and a board member for the Center for Children and Families. She received her J.D. from the OU College of Law in 1994 and a bachelor’s degree from OU in 1991.

Monica Wittrock is vice president of Corporate Underwriting for First American Title Insurance Company. She was formerly regional vice president managing operations in six states. Prior to that, she was in private practice in Oklahoma City, where she practiced in real estate, banking and commercial law. She is a member of the Oklahoma City Real Property Lawyers Group and serves on the Oklahoma Title Examination Standards Committee. She is a director for FNB Community Bank and chairs the Compliance and Audit Committee. Ms. Wittrock was a member of the Oklahoma Abstractors’ Board and served as its chairman, the Oklahoma Real Estate Commission and the Oklahoma Board of Licensure for Professional Engineers and Land Surveyors. She serves on the ALTA/NSPS Liaison Committee.

Ms. Wittrock is also a founding member of CREW-OKC. She was named Title Person of the Year by the Oklahoma Land Title Association and is very active in legislative affairs. She is a frequent speaker for many industry organizations. She currently serves as president-elect for the Lyric Theatre of Oklahoma Inc. Board of Directors and on leadership committees for Church of the Servant United Methodist Church, where she also serves as organist and percussionist for Music Ministries. She is married to Kevin, and they have two married children, Dr. Robert Wittrock and Sarah Moore (an OBA member). Her favorite job right now is being “M” to her grandchildren, Kevin, Arthur and Anne.