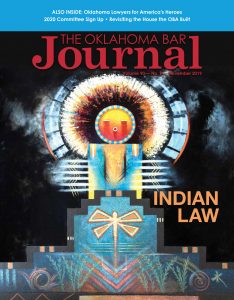 Treaty Rights Curtail State Taxing Authority
The U.S. Supreme Court’s recent decision in Washington State Dept. of Licensing v. Cougar Den Inc.,1 a case pitting the Yakama Nation’s treaty right to travel against the state of Washington’s motor fuel importation tax, showed a majority of the court standing by the “Indian canons of construction.” At least two justices, however, were ready to depart from the long-established rules of treaty interpretation.

Carpenter v. Murphy: Will the U.S. Supreme Court Recognize the Continued Existence of the Muscogee (Creek) Nation's Reservation?
Before the United States Supreme Court is a case that could drastically affect tribes’ jurisdiction in Oklahoma. If the Indian defendant and the Muscogee (Creek) Nation (Creek Nation) are successful, Carpenter v. Murphy would reverse the state of Oklahoma’s long-standing assumption that reservation boundaries located within its borders no longer exist.

Industrial Hemp Production and the 2018 Farm Bill: Tax Implications for Tribal Producers
The passage of the 2018 Farm Bill1 marked a historic development for Indian country, cementing 63 new provisions across 11 of the 12 titles aimed at specifically supporting the production of food, fiber and jobs for tribal governments and individual tribal producers. This created a number of new opportunities for the exercise of tribal sovereignty and opened new pathways for individual tribal producers to access federal programs. A critical development in this arena exists in the horticulture title, where Congress legalized the production of industrial hemp and fully authorized tribes to regulate hemp production in a manner consistent with their state counterparts.

United States v. Osage Wind: An Example of How an Indian Tribe's Unique Status Governs Appeal Rights and Statutory Construction
In January 2019, the U.S. Supreme Court denied a request to review the 10th Circuit’s decision in United States v. Osage Wind, LLC.1 The decision held that the Osage Minerals Council (OMC), acting on behalf of the Osage Nation (Osage or tribe), had a right to appeal an earlier decision where, though it was not party and had not intervened, it maintained a unique interest to appeal.2

The Role of the Legal Professional Related to Disaster Preparedness in Indian Country
Imagine for a moment the following scenarios: It is a quiet spring morning in March. You are asleep in your modest little home outside of Oso, Washington, when you feel the ground shake. You briefly think it is an earthquake until you hear the sounds of buildings around you being crushed and destroyed. You look out your bedroom window and see a wall of mud tearing through the valley pushing and dragging houses and vehicles in its wake; or it is a gorgeous summer day in August. You are on a bank of the San Juan River. You are about to step into the river, hand-in-hand with your grandson, when you notice the water is slowly turning a bright orange color you have never seen before in the river. Perplexed and a bit scared, you decide you and your grandson should not go into the river today. Your grandson turns to you and asks what happened to the river. You tell him you don’t know. You each stare at the river.

The History of Veterans Day: More Volunteers Needed to Help America's Heroes
It is difficult for me to comprehend the immensity of this year – the 100th anniversary of the creation of Veterans Day. In 1919, Woodrow Wilson penned out the framework of what was then called Armistice Day. This would later be reclassified by our nation’s Congress as Veterans Day. Our nation was healing from the wounds received in the Great War (what we have come to know as World War I).

The House the OBA Built
To many, a house is more than just four walls: it is the stream of memories created there with family and friends. For Sharie Northington, the house she has called “home” for the past 14 years is even more special.