On June 23, 2021, the United States Supreme Court released its decision in Mahanoy Area School District v. B.L.,1 the first student speech case decided by the court in almost 15 years. At issue was whether the Mahanoy School District had violated the First Amendment rights of a student by suspending her from the cheerleading squad after she posted a profanity-laden message to her Snapchat account expressing her displeasure at not making the varsity cheerleading team.2 A disgruntled student venting on social media is a near-daily occurrence faced by our country’s public schools, so some may wonder why the court chose to take up Mahanoy when it has declined to review numerous other student speech cases in recent years.

The Supreme Court decided four student speech cases between 1969 and 2007,3 determining that public school students retain their First Amendment rights at school, though permitting some regulation by school officials in recognition of the special circumstances of the school environment. However, none of those cases contemplated student speech that occurs online. Absent guidance from the high court regarding the application of current student speech jurisprudence to the internet age, lower courts have split on the issue,4 leaving school officials unsure of their authority to intervene in instances of troubling student speech that originates off campus but impacts the school environment. Thus, education law practitioners across the country watched with keen interest as the court in Mahanoy addressed the following question: To what extent do public school officials have the authority to regulate student speech that occurs off campus?

Fifty years ago, the Supreme Court recognized in Tinker v. Des Moines Independent Community School District that students “do not shed their constitutional right to freedom of speech or expression at the schoolhouse gate.”5 The court held the school district’s punishment of three students for wearing black armbands in opposition of the Vietnam War was an unconstitutional restriction on speech.6 Though Tinker clarified that students retain significant First Amendment rights while in school, those rights are not absolute, and the court went on to lay out the framework for analyzing student speech that still applies today. Justice Fortas, writing for the majority, stated, “Conduct by the student, in class or out of it, which for any reason … materially disrupts classwork or involves substantial disorder or invasion of the rights of others is, of course, not immunized by the constitutional guarantee of freedom of speech.”7 In weighing a student’s constitutional right to free speech against the school district’s need to maintain the educational environment, the burden falls on the school district to demonstrate disruption, disorder or invasion of others’ rights. In the case of Mary Beth Tinker and her peers, the school district could not specifically articulate how the students’ silent act of protest “materially and substantially interfere[d] with the requirements of appropriate discipline in the operation of the school,” thus the students’ speech was protected.8

A trio of post-Tinker decisions by the court has further clarified limitations on student free speech, permitting the restriction of on-campus speech that is indecent, lewd or vulgar and involves a captive audience;9 school-sponsored speech that is reasonably related to pedagogical concerns (in this case, a school newspaper);10 and speech that promotes illicit drug use.11 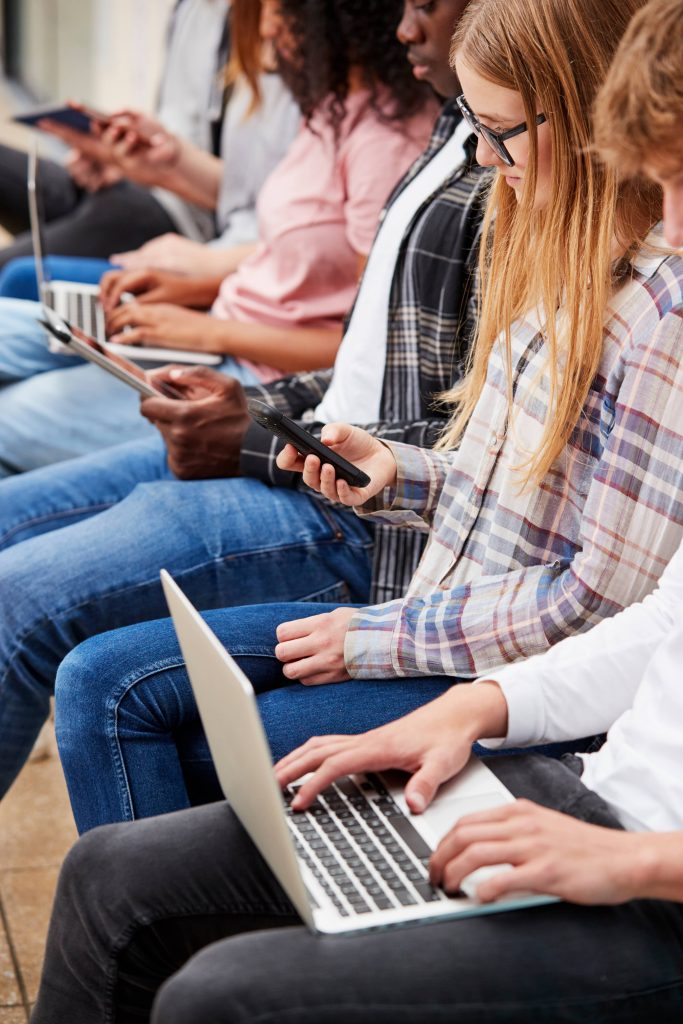 Education law practitioners have relied on Tinker and its progeny to advise school district clients regarding limitations on student speech in the school environment, but the rise in online communication platforms among students has blurred the lines between on- and off-campus speech, causing confusion for school officials and their counsel when the speech in question occurs outside the schoolhouse gate. By 2018, 97% of 13- to 17-year-olds used at least one social media platform.12 Ninety-five percent of teens have access to a smartphone, and 45% claim to be online “nearly constantly.”13 With smartphone ownership now a nearly universal aspect of teen life, much of their modern-day discourse occurs via the internet. Add the prevalence of computer-based learning during the recent COVID pandemic, and it has become much easier for student speech originating off campus to instantly reach a wide audience of peers and impact the on-campus environment.

It is not at all surprising that schools have struggled with determining their role in regulating student speech that occurs online but off campus. School officials and school law practitioners have been clamoring for guidance regarding the extent to which Tinker applies to off-campus speech, and the straightforward facts of the Mahanoy case provided an opportunity for the Supreme Court to deliver much-needed direction to our nation’s schools.

MAHANOY V. B.L.: OFF CAMPUS AND OUT OF LINE?

B.L., a sophomore student at Mahanoy Area High School, was a member of the junior varsity cheerleading squad her freshman year and hoped to move up to varsity as a sophomore.14 After learning she did not make the cut, but an incoming freshman did, B.L. – like many disgruntled teens in the digital age – took to social media to vent.15 At a local convenience store over the weekend, B.L. posted a photo of herself and a friend with their middle fingers raised, captioned with the words “f*** school f*** softball f*** cheer f*** everything.”16 She also posted a blank image captioned, “Love how me and [another student] get told we need a year of jv before we make varsity but tha[t] doesn’t matter to anyone else?”17 These posts were distributed to B.L.’s approximately 250 Snapchat “friends,” some of whom were also students and cheerleaders at Mahanoy Area High School.18 A fellow student took screenshots of the posts and shared them with the cheerleading coach.19 Though she apologized after the fact, B.L. was subsequently removed from the cheerleading squad for a year for violating team and school rules prohibiting the use of profanity directed toward a school extracurricular activity.20

B.L., along with her parents, filed suit in federal district court, alleging a violation of her First Amendment rights. Applying the Tinker analysis, the district court agreed, finding that B.L.’s speech did not cause substantial disruption to the school environment.21 On appeal, the 3rd Circuit affirmed the district court’s decision, though for different reasoning.22 In a surprising departure from other circuit courts to consider the question, two judges on the panel decided to “forge [their] own path” and declared, “Tinker does not apply to off-campus speech – that is, speech that is outside school-owned, -operated, or -supervised channels and that is not reasonably interpreted as bearing the school’s imprimatur.”23 Because B.L.’s speech occurred away from the school campus, the appellate panel reasoned the Tinker framework did not apply, and the school district could not punish her for her pure speech.24 This broad new rule was deeply concerning for school districts and their legal counsel as it could prevent school districts from addressing online bullying, harassment, threatening behavior and other harmful student speech that risks student safety and significantly disrupts the learning environment.

The Mahanoy Area School District filed certiorari with the Supreme Court, requesting an opinion regarding the applicability of the Tinker standard to off-campus speech. In an 8-1 decision, the court ruled for B.L., finding the school had overstepped its role in punishing B.L. for her form of pure speech.25

However, the court also sided with the school district by rejecting the 3rd Circuit’s assertion that Tinker does not apply off campus, reasoning that schools do have some authority over off-campus speech, although it is “diminished.”26 Justice Breyer, writing for the majority, identified three features of off-campus speech that could diminish a school’s interest in intervening:

The court noted that the school’s interest in regulating off-campus speech remains significant in some circumstances, such as “serious or severe bullying or harassment targeting particular individuals; threats aimed at teachers or other students; the failure to follow rules concerning lessons, the writing of papers, the use of computers, or participation in other online school activities; and breaches of school security devices.”28

Applying Tinker, along with the three features of off-campus speech listed above, the court found no evidence that school officials were standing in the shoes of B.L.’s parents – her speech occurred off campus, outside of school hours, and it did not directly mention the school or target any students with harassing or bullying behavior.29 Though B.L.’s language was crude, there was “no evidence of any effort to prevent students from using vulgarity outside the classroom.”30 Additionally, the school could prove no evidence of substantial disruption or decline in cheer team morale.31

STUDENT SPEECH POST-MAHANOY: WHERE DO WE GO FROM HERE?

One of the goals of public schools is to teach civil discourse and debate while still allowing students to disagree and express unpopular opinions. Schools also strive to maintain a safe environment where students can be free to learn and grow without being harassed, bullied or threatened. The Supreme Court struck a balance in the Mahanoy case by rejecting the 3rd Circuit’s overly broad “location” rule and acknowledging that while the First Amendment protects student speech in most instances, schools do have the authority to regulate some types of student speech, even speech that occurs off campus. It is important to note that Tinker analysis still applies: “In Tinker, we indicated that schools have a special interest in regulating … student speech that materially disrupts classwork or involves substantial disorder or invasion of the rights of others.”32

When counseling school district clients regarding student speech issues, it is important to note that First Amendment protection for student speech should be the norm, not the exception. Absent a substantial disruption or invasion of the rights of others, school districts should be careful how they respond to speech that stems from the impulsiveness of youth – an angry parent or insulted staff member demanding punishment for an online insult or critique will typically not rise to the level of intervention by the school district, as demonstrated in Mahanoy. However, speech that bullies, harasses or otherwise infringes on the rights of others can and should be regulated. Oklahoma law requires school employees to investigate reports of bullying and harassment,33 even when the reported behavior occurs via electronic communication. School staff also have mandatory reporting requirements for threatening language or behavior “which reasonably may have the potential to endanger students, school personnel or school property.”34 School district personnel should be well-versed on district policies and laws regarding student speech, consider the facts of each potential restriction of student speech and when weighing potential curtailment of student speech, be able to articulate a reasonable forecast of substantial interference or disruption of the school environment or an infringement on the rights of others in the school community.

Hayley Jones is the associate general counsel for Oklahoma City Public Schools. She is a member and past president of the Oklahoma School Board Attorneys Association and a member of the NSBA Council of School Attorneys. Ms. Jones is a 2015 graduate of the OU College of Law and a former public school teacher.