The Goal to Become Equal: The Women’s National Soccer League and the Equal Pay Game

By Katherine Mazaheri and Hannah Lunsford 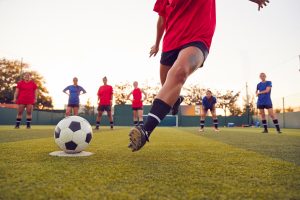 Play like a girl. The Women’s National Soccer League (U.S. League) are the women we want to lead our generation in the equal pay game. Fighting with the power they bring to the field, they aimed to win a gender discrimination suit and equal pay for the women in their league in the case Morgan v. United States Soccer Federation, Inc. The lawsuit was filed in 2019 against the U.S. Soccer Federation (the federation) in the U.S. District Court of Los Angeles, where the female players claimed they had not been paid and were not treated equally to their male counterparts. The U.S. Women’s League asked for more than $66 million in damages under the Equal Pay Act and Title VII of the Civil Rights Act of 1964.1

Twenty-eight plaintiffs from the U.S. Women’s League brought claims regarding the discrepancy of pay structure in their bargaining agreements as compared to the U.S. Men’s League. One claim pointed specifically to the time period from March 2013 through Dec. 31, 2016, when the previous collective bargaining agreement expired, and the women players could potentially make a salary of $72,000 plus bonuses for winning nontournament games, as well as World Cup appearances and victories and Olympic victories.2 At the start of the suit, the female plaintiffs had their first victory in court when they were certified as a class in November 2019, allowing any player from the league since February 2015 to join the suit.3 Both sides submitted motions for summary judgment in February 2020. The federation asked for a dismissal of the suit, and the U.S. Women’s League asked for the original damages as well as equality in pay and treatment as compared to the U.S. Men’s League.4

Gender discrimination and equal pay lawsuits are not new to women’s soccer around the world. Last year, the Reggae Girlz, the first Caribbean Women’s Soccer League to qualify for the World Cup, used social media to demand equal pay from their federation, the Jamaican Football Federation, launching the “No pay, No play” boycott campaign.5 The Jamaican Football Federation agreed to pay the women players equally within a month of the start of the “No Pay, No Play” campaign. Last November, the Matildas, the National Women’s Soccer League in Australia, accomplished a huge win by ensuring that they would be paid as much as their male counterparts and get the same operational support in a four-year deal with their football federation.6 The fight for equal pay is not new to the U.S. Women’s League either. In 2016, five women from the U.S. Women’s League filed a similar complaint against the Equal Employment Opportunity Commission and the federation. The filing in the case noted that the women’s team generated nearly $20 million more than the men’s team in revenue the previous year but were paid about a quarter of what the men made.

The arguments on both sides of Morgan v. United States Soccer Federation, Inc. were persuasive, as detailed below, and the federation did not back down against the U.S. Women’s League. The federation relies on Stanley v. University of Southern California7 as their defense. In Stanley v. University of Southern California, Marianne Stanley, the former head coach of the women’s basketball team at the University of Southern California (USC), was terminated after her first contract with the university expired and many successful years of coaching under her belt. Coach Stanley asked for pay equal to her male counterpart and was denied. Shortly after being denied, she brought claims that USC was violating the Equal Pay Act and sought a declaratory judgment, stating the university’s conduct was discrimination based on sex. She based her claims on language in the Equal Pay Act that she should be paid equal to her male counterpart because her job “requires equal skill, effort and responsibility, and [is performed] under similar working conditions.”8 However, the court felt differently and ruled in favor of USC, stating that the evidence presented to them showed “significant differences in job pressure, the level of responsibility, and in marketing and revenue-producing qualifications...such factors taken into consideration does not prove gender bias or violate the Equal Pay Act.”9 In Morgan, the federation is clearly using Stanley to bolster the claim that the U.S. Women’s League has significant differences in skill, effort and responsibility from the U.S. Men’s League, therefore, there is no gender bias or violation of the Equal Pay Act.10

The women of the U.S. Women’s League fought back, arguing that the federation is guilty of gender-based decision making and relies heavily on the contracts they have with the federation. The women claimed the federation is paying them less than their male counterparts “for substantially equal work and by denying them at least equal playing, training, and travel conditions; equal promotion of their games; equal support and development for their games; and other terms and conditions of employment.”11 Moreover, the class of plaintiffs relied on comments in court documents by U.S. Soccer Federation President Carlos Cordeiro and predecessor Sunil Gulati in which statements were made that the U.S. Women’s League players had less physical ability and responsibility than the U.S Men’s League.12 The revelation of this statement sent waves through the legal and soccer community resulting in President Cordeiro stepping down early March 2020. Mr. Cordeiro apologized and refuted the argument, stating the statements in the legal filing caused great offense, and he never intended for such statements to be used.13

The result of these events ironically led to not only a woman but a former player of the U.S. National Women’s Soccer League taking President Cordeiro’s place. Before stepping down as president, he released an open letter early in the lawsuit with financial data from 2010 to 2018 of what the male and female players were paid. The women’s salaries totaled just under $8 million more than the male team members’ during that time period.14 However, multiple articles and representatives say that is “utterly false.”15 The reasoning of the false claim was not revealed, but the reality of the U.S. Women’s League having more success than the U.S. Men’s League by winning four World Cups and four Olympic gold medals points to a potential reason. Governed by the contracts between each team and the federation, winning World Cups and Olympic medals garnered more attention with interviews, promotions and advertising; therefore, the U.S. Women’s League received more revenue than the U.S. Men’s League.

Judge R. Gary Klausner for the Central District of California ruled on dueling summary judgment motions. Defense for the federation claimed that giving summary judgment to the plaintiff is contrary to the law by essentially rewriting the plaintiff’s collective bargaining agreement to give them more than a higher reward, when they never took the risk of asking for one. Additionally, the federation claimed that the U.S. Women’s League has been making millions of dollars more than their male counterpart in recent years. Judge Klausner ruled in favor of the federation’s summary judgment. Judge Klausner granted the summary judgment for the federation in the Equal Pay Act claim because he judged the women’s league made more money than the men’s league. Judge Klausner sided with the defendant’s argument that the women’s league plays more games and wins more games, therefore, making more money. From 2015 to 2019, the U.S. Women’s League earned approximately $24 million and averaged $220,747 per game. On the other hand, the U.S. Men’s League earned approximately $18 million and averaged $212,639 per game.

In the Title VII claim, the plaintiff’s U.S. Women’s League argued they are paid less than similarly situated U.S. Men’s League players, and they are subjected to unequal working conditions. The federation motioned for summary judgment on the Title VII claim, arguing that it did not fall within the scope of employment discrimination. The U.S. Women’s League claims that they work in unequal working conditions referred to the amount of money allocated to playing fields, using commercial airlines instead of charter flights, travel expenses (including room and board), medical training and support and differences in head coach compensation. The judge found that field services, charter flights and hotels and medical and training support were within the scope of employment discrimination.16

Similar to the discussion of the playing fields, the plaintiffs were able to meet the three elements of a discrimination claim – they are a protected class, they performed their jobs adequately and they were subjected to an adverse employment claim. However, in this issue, the court stated that the circumstances “[gave] rise to an inference of discrimination” in the issue regarding hotels and airfare.18 Again, the federation argued it had legitimate reasons for the circumstances, such as the business class flight would not cause a competitive disadvantage in one of the U.S. Women’s League games, there were limited commercial flight options for a specific U.S. Men’s League game, and since the U.S. Men’s League was struggling to qualify for the 2018 World Cup, the federation wanted to supply any competitive advantages.19 The court found the federation provided legitimate reasons, and the plaintiffs argued that it was pretext using the HR expert and Cordeiro’s statements. The court found the plaintiff’s evidence was enough to raise a question regarding the federation’s reasons as pretext, because the court regarded them as weak for such a big discrepancy between the women’s and men’s allotted funds, $5 million and $9 million respectively.20

Katherine Mazaheri is the founder and managing attorney of Mazaheri Law Firm, an all-female team of attorneys who have gained a reputation for taking on cases that attack various social injustices and help families in crisis. She’s passionate about employment litigation and educating on legal issues in online seminars regarding COVID-19 and employment law, sexual harassment and other Title VII best practices.

Hannah Lunsford is a recent graduate of the OU College of Law. She found a love of employment law while working at Mazaheri Law. She looks forward to a career that allows her to help her community and strive for integrity in everything she does.