By Susan Beaty and Kellie Laughlin 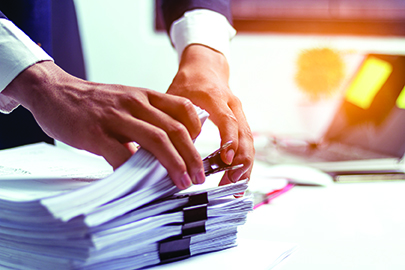 When submitting an appeal to the Oklahoma Supreme Court, always look first to the Oklahoma Supreme Court Rules.1 The answers to a large majority of technical questions – when to file, what to include and where to submit – are included in the rules.2 Here we offer helpful tips for attorneys submitting appeals from final orders of district courts, with particular emphasis on appellate brief writing. The guidance provided herein is intended only as a “starter kit” for submitting an appeal and is not a comprehensive or exhaustive review of the rules. We include additional advice regarding style and tone in appellate briefs with the intention of providing insight into effective advocacy at the appellate level.3

GETTING STARTED – THE PETITION IN ERROR

TO BRIEF OR NOT TO BRIEF: ACCELERATED APPEALS UNDER RULE 1.36

Before addressing appellate briefing, we first address a feature of appellate procedure that may cause some to breathe a sigh of relief: briefs are not required for every appeal. In fact, many civil appeals are decided without the aid of extensive written arguments and are instead adjudicated according to the accelerated appeals process enumerated in Rule 1.36.

The accelerated appeals process is available in three categories of appeals: 1) rulings on motions for summary judgment under District Court Rule 13; 2) orders granting dismissal for failure to state a claim; and 3) orders granting dismissal for lack of personal or subject matter jurisdiction.7 In these appeals, written briefs are not permitted unless the appellate court gives leave.8

In all appeals not governed by the accelerated procedure, briefs are required.11 However, because briefs are not normally permitted in accelerated appeals, the petition in error is especially important in listing the issues on appeal and presenting a brief overview of the case.12 In an appeal where briefs are submitted, the exhibits attached to a petition in error serve as only a preliminary overview of the forthcoming briefs. In an accelerated appeal, however, the one-page summary of the case and the list of issues on appeal are the only opportunity for persuasion. Of course, as we will highlight regarding briefs, the summary of the case is never a place for bare legal argument. Still, a prudent attorney will utilize the permitted single page to not only present the facts and procedural history, but also highlight the most important issues of fact and law.

BEFORE YOU BRIEF – DESIGNATING THE RECORD ON APPEAL

Essential to any successful appellate brief is citation to a record supporting your claims of error.13 The Oklahoma Supreme Court Rules provide for the record on appeal to be created by the parties filing a designation of record. The appellate court’s review is limited to the instruments included in the record on appeal. 14 To be included in the record on appeal, those instruments must be designated by the parties.15 Indeed, “all parties to an appeal must designate a record.”16 Rule 1.28(a) sets out thorough instructions for how to properly designate your record for appeal.

Rule 1.28(b) gives direction for what items should be designated as well as what items may not be designated, both with an eye toward limiting the record to items relevant to the issues on appeal. First, the rule directs parties to designate only those instruments filed in the case which are pertinent. To reiterate this limitation, the rule states, “[N]o designation of record which generally includes the entire trial court record shall be filed without order of the Chief Justice.” Rule 1.28 also allows trial courts to penalize parties who designate excessive or unnecessary portions of transcript.22

Second, the rule expressly states which items shall not be included in the record:

When deciding which instruments to include in the designation of record, parties should be mindful of the applicable standard of review as well as the issues or errors alleged. Both will help parties determine which pleadings, testimony or exhibits will best support their claims on appeal. A case governed by a clear and convincing standard may well require more of a record than one determined by any competent evidence, although the type of errors alleged also impacts the record necessary to allow review of those errors. In briefs, “[q]uotations from the record must be accurate, in context, and reference the pages in the record where they appear.”25 Necessarily you will want to designate any instrument you intend to quote from in your brief.

WRITING THE BRIEF – SUMMARY OF THE RECORD

The brief of the moving party shall contain a Summary of the Record, setting forth the material parts of the pleadings, proceedings, facts and documents upon which the party relies, together with such other statements from the record as are necessary to a full understanding of the questions presented to this Court for decision.26

WRITING THE BRIEF – WHAT’S THE ISSUE?

Still, the greatest difficulty arises not in determining where to list the issues on appeal, but in determining what issues to include. Supreme Court Rule 1.11(f) provides that in appellate briefs, “[t]he main contentions of the parties must be set forth in separate propositions” and authority supporting “each proposition must follow the statement of the proposition.”34 Rule 1.11(f) essentially requires that a brief be well organized and issues be clearly delineated. You should therefore ensure that every proposition is clear and distinct from the other main contentions and that supporting argument and authority properly follow the appropriate assertion.35

Occasionally, for fear that a viable issue might be forfeited on appeal, some attorneys adopt a scorched earth approach in listing and briefing issues on appeal. While it is important to include and support every major contention for which there is merit, it is also your duty to judiciously select and identify the issues raised.36 Though a party might list all possible issues on appeal in the list of issues attached to the petition in error, the brief should represent a more carefully crafted and distilled argument. As feasible, you should seek to present only a few main questions in your brief. Avoid conflating and confusing issues. A more intentional selection and identification of the issues prior to drafting the brief may help avert trouble.

The tone with which an appellate argument is written can be nearly as important as its substance. When writing an appellate brief, attorneys must walk the fine line between maintaining persuasive value and sounding overly argumentative. As in trial practice, lawyers in appellate practice can stifle their own effectiveness by communicating in an excessively adversarial manner. Not only does this undermine the general goal of civility in the legal profession, but it also detracts from the overall effectiveness of the brief. A quick rule of thumb would be to generally omit words describing the opposing party or the lower court. With limited space for argument in a brief – only 30 pages37 – it is best to preserve every word in furtherance of your argument.

Finally, when drafting an appellate brief, remember to keep it simple. Though the idea of drafting an argument directed to the highest court in the state may conjure impulses to delve into the nuances of complicated legal inquiries and employ lofty legal jargon, the best briefs are those which capture the arguments as succinctly and simply as possible.38 An effective brief acts as an instruction manual guiding the court in the correct application of the law. As such, there is no need to muddy the waters with puffery or legalese. Distill it down and keep it straightforward.

The appellate court reviewing a trial court decision is bound by the record presented, the applicable standard of review and relevant authority. Focusing on these things in a clear, direct and simple fashion is your best bet. Plainly state how the trial court erred, accurately state where the error is shown in the record, explain why your client is entitled to relief and always use the Oklahoma Supreme Court Rules as your guide.

Susan Beaty is a staff attorney for Judge Kenneth L. Buettner of the Oklahoma Court of Civil Appeals. She is a member of the OBA Appellate Practice Section and a member of Oklahoma City Rotary Club 29. She is a graduate of the OU College of Law.

Kellie Laughlin graduated from the OU College of Law in 2018, where she served as an editor of the Oklahoma Law Review and competed in moot court. She is currently a staff attorney to Judge Kenneth L. Buettner of the Oklahoma Court of Civil Appeals
in Oklahoma City.

2. Special procedures regarding specific types of appeals from orders other than a final order from a district court, such as those from the Corporation Commission, Workers’ Compensation proceedings, Tax Commission, etc., are laid out with particularity in the rules.

3. The opinions expressed herein are the authors’ alone and do not represent the view of any court or member thereof. Judicial and professional opinions may differ regarding the persuasiveness of advocacy tactics addressed herein.

14. Rule 1.33(d) (“The record on appeal shall consist only of those portions of ‘the entire trial court record’ properly designated by a party to the appeal or ordered by the appellate court.”).

16. A notable exception to this rule is in cases governed by the accelerated procedure outlined in Supreme Court Rule 1.36. In those cases, the parties themselves gather and file the record on appeal, rather than designating a record to be prepared by the district court clerk; though the record submitted still must be certified by the district court clerk. Rule 1.36(g).
Additionally, in the unusual case in which questions of law may be determined without reference to the trial court record, the parties may file a statement in lieu of a record on appeal. See Rule 1.31.

19. Rule 1.28(c). Bear in mind that subsections 1, 2 and 3 of Rule 1.28(b) include different deadlines for filing the designation of record in three specific types of appeals.

20. Rule 1.28(b), (c). The rule notes that a different form will be used when the Oklahoma Uniform Case Management System is in effect. This article does not address procedures under that future scenario.

The statement of the issues or questions presented for review requires careful selection and choice of language. The main issue should be stressed and an effort made to present no more than a few questions. The questions selected should be stated clearly and simply. A brief that assigns a dozen errors and treats each as being of equal importance when some are clearly not lessens the stronger arguments. As Justice Frankfurter once said, a bad argument is like the clock striking thirteen,it puts in doubt the others.

38. See Justice Ruth Bader Ginsburg, Gillian Metzger, Abbe Gluck, A Conversation with Justice Ruth Bader Ginsburg, 25 Colum. J. of Gender & L. 6 (2013) (“But one thing about writing a brief. You have to keep it simple. You have to remember that judges are overwhelmed with reading cases briefs ... [N]ever write a sentence that has to be read again to be understood.”).