Ethics and Psychology in Mediation: More Important Than You Think 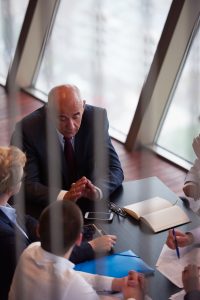 Remember the TV show, The Office? In one episode, Michael Scott, the bumbling head of the Dunder Mifflin Scranton, Pennsylvania branch, tries to resolve an interoffice dispute through a handbook on mediation. The handbook says there are three types of mediation: mediations in which one participant or the other gets what he or she wants, another where neither gets what he or she wants and a final one in which everybody gets what they want. Mr. Scott is optimistic he can get the co-workers to the win-win-win compromise.

The foundational textbook for mediators has historically been Getting to Yes, created by members of the Harvard Negotiation Project. I am confident Mr. Scott’s “win-win-win” mindset came from the unreal expectations set by Getting to Yes, because the authors of that book would have you believe the possibility of an agreement in which everyone gets what they want is fairly likely because disputes often have areas of mutual interest that can lead to a cooperative agreement.

The reality is much different. As anyone who has served as a mediator or participated in a mediation can tell you, people are not looking for ways to solve both sides’ problems – they’re looking for ways to solve their own problem. This is why a book like Never Split the Difference, by a former FBI hostage negotiator, is much more practical. In Never Split the Difference, the author doesn’t delve into mutual interests like the authors of Getting to Yes – and, in fact, takes several digs at Getting to Yes because of its pie-in-the-sky theory. Instead, Never Split the Difference employs various psychological techniques to create an environment for dispute resolution.

So, who’s right? Should mediators, or attorneys, be looking for mutual interests, or should they simply be looking for ways to game one party psychologically? I believe the answer is: it depends.

THE CRUX OF MEDIATION

Broadly speaking, mediation can be thought of as an informal dispute resolution method for any conflict. However, the focus of this article will be on mediating litigation cases since that will be of most practical benefit for those reading. To that end, we must frame the purpose of mediation in a litigation context. Proper framing leads to proper answers; after all, Einstein said if he had one hour to solve a problem, he’d spend 55 minutes articulating the problem and 5 minutes solving it.

I’m sure you’re thinking, “Why is framing the question even necessary? Isn’t the point of every mediation to settle the case? Isn’t that defining the problem?” If that were so, then why doesn’t every case settle? In other words, if both sides genuinely want to settle, then shouldn’t it get done? Of course, not every case gets settled, and of course, there are a potentially infinite number of reasons why any given case doesn’t settle – the defense adjuster undervalues a claim, a plaintiff’s lawyer overvalues a claim, a divorcee can’t set aside his or her emotions, etc., etc. The point is, a case does not necessarily fail to settle because both sides don’t want to settle; rather, there is some other problem that needs to be overcome to reach agreement.

The reason Getting to Yes fails in practice isn’t because the theory is bad, it’s because the theory doesn’t match up to reality. When you have an overly zealous adjuster or plaintiff’s lawyer, you have someone who doesn’t gauge their own interests accurately. That is a psychological roadblock someone has to push through in order to resolve the case. Thus, if you were to frame every mediation as simply a method of settling the case, you’ve framed the question too broadly. Instead, the question should be, “How do I get Party A to see Fact ‘X’?” This, in my opinion, is the key to mediation – homing in on the real problem and figuring out through rational thought and/or emotional gaming how to get the obstinate party to move.

THE ETHICAL DILEMMA OF THE MEDIATOR

Standard I of the Model Standards of Conduct for Mediators by the American Bar Association is titled “Self-Determination.” The standard explains that a mediator “shall conduct a mediation based on the principle of party self-determination. Self-determination is the act of coming to a voluntary, uncoerced decision in which each party makes free and informed choices as to process and outcome.” (Emphasis supplied.) Taking this standard at face value then begs the question as to the extent a mediator may employ psychological or emotional devices to appeal to a particular party. If a mediator were to play on the heartstrings of a litigant to get movement in a case, has the mediator violated this standard?

Let’s look at it from another perspective. The Oklahoma Supreme Court has made it clear that a right to trial by jury in our Constitution means the right to a fair and impartial jury.1 If our Constitution does indeed guarantee a fair and impartial jury, what are we to make of the trial technique known as the Reptile? The Reptile method of trying cases basically posits that if you are capable of exploiting the “reptilian” portion of a juror’s brain, the amygdala, to stimulate fear, then the juror is more inclined to side with your client and punish the other side. Scientific studies have shown the amygdala will react to fear-inducing stimuli even when a person isn’t conscious of the fear. In other words, the juror believes he or she is making a rational and voluntary decision, but in reality, may in fact not be because he or she isn’t conscious of the fear bias implanted in the brain.

Indeed, this brings up the very notion of free will in the first place. If you want a quick dive into why it’s arguable that humans lack total free will, look into split-brain studies. Split-brain studies are literally just that – studies of human behavior after the two hemispheres have been separated, thereby preventing communication between the left and right hemispheres.

In one such study, participants were given an electrical stimulation that compelled the participant to stand up. When asked why the participant stood up, the participant provided a rational justification like, “‘Oh, I need to get a drink.’”2 However, the actual reason the person stood up is not because of the after-the-fact justification, but because of the preconscious stimulation. Just like with the juror who voted in favor of punitive damages. Because the hypothetical juror isn’t being studied by brain imaging, it’s impossible to determine whether the juror is creating an after-the-fact justification for punishment based upon an unconscious fear bias via the Reptile, or really, truly and voluntarily believes that one side ought to be punished.

Where then does one draw the line? If a trial lawyer obtains a jury verdict through psychological gaming, can a mediator do the same to get one party to settle? When has a mediator overstepped his or her bounds in making different types of arguments to persuade one party to move on an issue?

Or, to make it less sinister, we could look at a very common situation. The parties have been mediating 8 hours, everyone is tired, and the parties are extremely close. Everyone is excited at the prospect of getting the case done, and then, simply to be finished, one side finally caves. The paperwork is signed, and one party goes home and sleeps on it, only to wake up the next morning with deep regret. That party feels as though the mediator or the lawyer coerced him or her into simply signing the deal in the late hours of the night and now wants to back out. We’ve all experienced instances like this. Was the party’s free will or voluntary choice supplanted by the psychological pressure of the mediation itself?

It doesn’t take a master manipulator, or even any intentional manipulation, to make a party feel as though he or she was robbed of an actual choice. Exhaustion can sometimes have that same effect. For example, in one study scientists found, “Experienced parole judges in Israel granted freedom about 65% of the time to the first prisoner who appeared before them on a given day.”3 However, “[b]y the end of a morning session, the chance of release had dropped almost to zero.” The same effect was seen after the judges returned from lunch. The first prisoner had a 65% chance of being released, and the odds decreased thereafter.

This is sometimes known as choice fatigue. Some psychologists posit that each choice you make takes away a little bit of your own willpower. That’s why you can start a diet, say no to yummy treats for a little bit and then be right back to eating ice cream for breakfast in a week. There’s only so much self-control we can impose upon ourselves before our hardwired biases and preferences kick in.

Just this brief foray into mediation, ethics and psychology ought to cause you to think seriously about a few things. First, what kind of a mediator do you need for your case? Do you have a case where both sides really are close to resolution, fairly amicable and only one small issue needs to be resolved? Or do you have a case where the parties are miles apart and both lawyers hate each other? Perhaps this latter scenario requires an FBI hostage negotiation approach.

Second, once you’ve selected the type of mediator appropriate for your case, what are the real issues in your case? I can’t fathom how many millions of billable hours are wasted in mediations the world over by the parties just trying to get on the same page. Are you playing football or baseball? Is this a case about liability or damages? Both? Articulating and clarifying the issues in advance not only saves time but will increase the chances of settlement. Why?

Because the final lesson is that information exchange in mediation is the bedrock to success. The party that controls the information, controls the mediation. Think about it. We’re not just talking about testimony and affidavits. We’re talking body language, verbal engagements and off-handed comments. As pointed out in Never Split the Difference, 7% of personal communication is via spoken words, 38% tone and 55% body language.

One might think, then, that a mediator has more information than anyone because he or she is in both rooms. However, that’s not always the case. Sometimes, lawyers or clients hedge on information sharing. When that happens, there is a potential advantage to the lawyer or client and a potential disadvantage to the mediator. So, now, who’s manipulating who? If one side never discloses fact “x” and the parties settle without fact “x” ever being known, was that mediation agreement truly an “informed” choice as the ABA standard of conduct requires? What if a lawyer intentionally slow plays a mediation to frustrate the other side in the hopes of gaining something more out of it? If the other side is experiencing choice fatigue, should the mediator stop the mediation? What if the mediator doesn’t know one side is truly fatigued?

The next time you think mediation is about dollars and cents or child visitation schedules, think again. Mediation is a complex interchange of information with many potential ethical pitfalls. That is why I think it’s important we take a broader view of mediation other than simply how to get to terms and conditions of settlement. We must constantly examine and reevaluate our problem-solving techniques inside the mediation room and the courtroom in order to ensure that however it is we come to resolve our disagreements, we do it ethically.