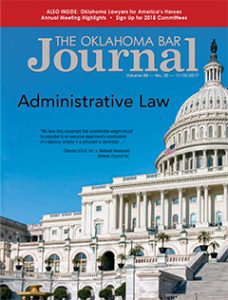 Navigating Administrative Hearings From Start to Finish
Imagine your client has received an agency letter alleging statutory violations and threatening to revoke her professional license. Where do you start?

Exhaustion of Administrative Remedies in the Bureau of Indian Affairs
Administrative law – mere mention of the topic may send a shiver down the spine, or induce the overwhelming urge to take a nap. Practicing it can be like learning a foreign language, requiring mastery of technical terminology obscured in inaccessible administrative codes. For many law students, it was a class you desperately tried to avoid taking in law school (up there with tax law, which, of course, is largely administrative). Perhaps this is why the late Justice Scalia once jokingly remarked that “administrative law is not for sissies.”1

Should 'Junk Science' Have a Place in Agency Decision Making?
History is littered with scientific debate regarding what exists and how things interact with each other. The intersection between that debate and the law presents some of the most difficult and important, yet routine, questions lawyers may face. Science is no “truth machine.” What is scientifically sound may not be legally sound, and vice versa, because “[s]cientific conclusions are subject to perpetual revision. Law, on the other hand, must resolve disputes finally and quickly.”1Although scientific understanding of phenomena is constantly evolving, the legal analysis for determining the admissibility of scientific evidence in court is well known to most lawyers. Yet, an open question remains as to whether the legal framework for determining the admissibility of scientific or technical evidence should apply to state agencies acting in a judicial capacity. Should “junk science” have a place in hearings before Oklahoma agencies, but not in Oklahoma trial courts?

Changing Exhaustion of Administrative Remedies in Employment Lawsuits
In many types of employment claims, a plaintiff must first exhaust administrative remedies, typically by filing a charge of discrimination with the Equal Employment Opportunity Commission (EEOC).  Until a few years ago, federal courts in the 10th Circuit treated the failure to exhaust administrative remedies as a jurisdictional basis for dismissal, meaning both that the court was required to dismiss when the basis for dismissal was shown and that the court could dismiss sua sponte at any time during the proceedings. Recently, however, the 10th Circuit has set in motion jurisprudential changes to the exhaustion of administrative remedies doctrine, reclassifying failure to exhaust in some circumstances from a jurisdictional failure to a “condition precedent” to bringing suit. This change in the law has resulted in practical and technical challenges for both plaintiff and defense counsel.