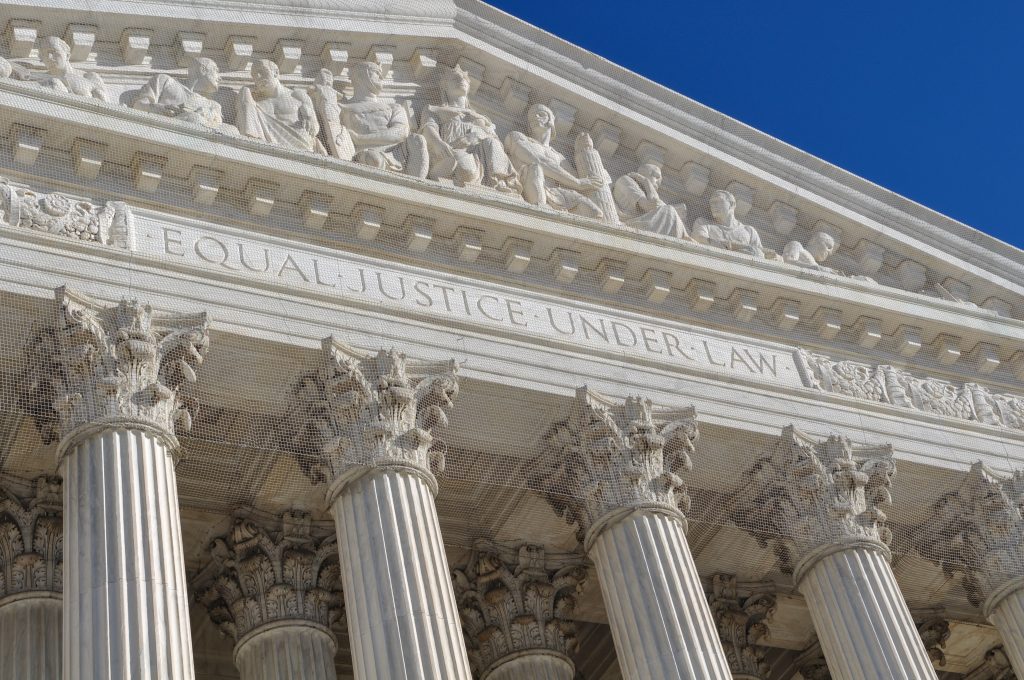 Ms. Aimee Stephens, an employee at a funeral home, came out as transgender.1 Mr. Gerald Bostic joined a gay softball league.2 Mr. Donald Zarda, a skydiving instructor, joked with a female client in harness for a tandem dive that she should not worry because he was gay.3 All were fired because of their natures, and all brought claims under Title VII of the Civil Rights Act of 1964 (Title VII). All but Mr. Bostock were successful at the circuit court level. On April 22, 2019, the United States Supreme Court granted petitions for writs of certiorari on two questions:

There are an estimated 11.5 million lesbian, gay and bisexual people aged 13 and older living in the United States, and of that group, an estimated 7.1 million are LGB workers (aged 16 and older).5 The United States is home to at least 1.55 million transgender people (aged 13 and older).6 The resolution of these cases may have far-reaching impact in other areas of the law such as discrimination claims under Title IX of the United States Educational Amendments of 1972 and Section 1557 of the Affordable Care Act.7

Lesbian, gay and bisexual people report being fired from or denied a job at a significantly higher rate than heterosexuals.8 Fifteen percent of transgender respondents to the 2015 large-scale United States Transgender Survey (USTS) reported being unemployed, triple the national unemployment rate at the time of the survey.9 Twice as many transgender respondents to the USTS live in poverty compared to the national average.10 A September 2019 report by UCLA’s William Institute entitled “Discrimination Against LGBT People in Oklahoma” found elevated levels of workplace discrimination against an estimated 117,000 LGBT Oklahomans, particularly against transgender Oklahomans.

During oral arguments in the cases now pending before the U.S. Supreme Court, “conservative” advocates before the court spoke of the intent of legislators in 1964 while “liberal” advocates stressed a strict construction of the phrase “because of sex.” The 11th Circuit has demonstrated it is theoretically possible to have different rulings, separating the LGB from the T in the civil rights each group enjoys.

As of the date this article was submitted, decisions are still pending. Rather than speculate on possible results, the emphasis here is to provide context to whatever the United States Supreme Court ultimately decides in this blockbuster trilogy of cases.

On Feb. 8, 1964, avid segregationist Rep. Howard Smith, proposed an amendment to what would become the Civil Rights Act of 1964. Rep. Smith proposed to amend the bill by adding the word “sex” after the word “religion” in five places. Before Rep. Smith’s amendment, sex was not to be protected in the nascent civil rights act.11

Rep. Smith, as chairman of the House judiciary committee, had refused to permit the bill to leave his committee but was forced to allow the bill to the floor after the assassination of President Kennedy. Many viewed his proposed amendment as a tactic to poison the bill.

Rep. Smith maintained several times that he was serious even as laughter roiled the chamber. Rep. Smith read a letter from a female constituent into the record decrying the “imbalance of spinsters” shut off from the “right to have a husband of her own.” This, Rep. Smith maintained, was a “real grievance of the minority sex.”12 Rep. Martha Griffith of Michigan replied, “Mr. Chairman, I presume that if there had been any necessity to have pointed out that women were a second-class sex, the laughter would have proved it.”13 The bill, with Rep. Smith’s amendment, passed the house on Feb. 10, 1964. On July 2, 1964, a few days after three civil rights workers were murdered in Mississippi, President Johnson signed the bill into law.

The law has evolved to reflect our national consensus that sex discrimination is pernicious. We have since added provisions to outlaw sex discrimination in education, health care and other areas. Sexual harassment and a “hostile work environment” can now violate Title VII.14 In an opinion written by Justice Scalia upholding a discrimination claim of same-sex sexual harassment, Title VII’s protections extended beyond the “principal evil” imagined by Congress at the time of enactment.15

In Price Waterhouse v. Hopkins,16 the U.S. Supreme Court ruled on whether discrimination based on sex-based stereotypes can constitute Title VII sex discrimination. In 1982, Ms. Ann Hopkins unsuccessfully vied to become the eighth woman of 663 partners of the international accounting firm of Price Waterhouse. Ms. Hopkins had secured a $25 million contract for her firm and was acknowledged to be highly competent.17

However, some partners wrote she was “macho,” “overcompensated for being a woman,” should “take a course at a charm school” and swore too much. A supporter wrote that Ms. Hopkins had “... matured from a tough-talking somewhat masculine hard-nosed manager to an authoritative, formidable, but much more appealing lady partner candidate.”18 The partner who placed Ms. Hopkins’ partnership on hold, wrote that to improve her chances of making partner, she should, “walk more femininely, talk more femininely, dress more femininely, wear make-up, have her hair styled, and wear jewelry.”19

In finding Price Waterhouse discriminated against Ms. Hopkins based upon her sex, the U.S. Supreme Court held “... we are beyond the day when an employer could evaluate employees by assuming or insisting that they matched the stereotype associated with their group, for, ‘[i]n forbidding employers to discriminate against individuals because of their sex, Congress intended to strike at the entire spectrum of disparate treatment of men and women resulting from sex stereotypes.’”20

THE IMPACT OF PRICE WATERHOUSE ON LGBT RIGHTS UNDER TITLE VII

Before Price Waterhouse, courts rarely granted rights to transgender persons under Title VII.21 For example, the plaintiff in one case had served in air combat over Vietnam with the United States Army from 1965 until 1968. Ms. Karen Ulane received the Air Medal with eight clusters. Before transitioning, she logged over 8,000 flight hours as a flight instructor but was fired by Eastern Airlines when she came out as transgender.22

Downplaying the importance of sex discrimination generally, the court noted that the “... sex amendment was the gambit of a congressman seeking to scuttle adoption of the Civil Rights Act. The ploy failed and sex discrimination was abruptly added to the statute’s prohibition against race discrimination.”23

In discussing the nature of transgenderism, the appellate court opined that “... even if one believes that a woman can be so easily created from what remains of a man, that does not decide this case.”24 The court held Eastern Airlines did not discriminate against Ms. Ulane because she was female but instead because she was a “transsexual”25 which the court defined as “a biological male who takes female hormones, cross-dresses, and has surgically altered parts of her body to make it appear to be female.”26

This view of sex and gender influenced Etsitty v. Utah Transit Authority.27 In Etsitty, a transgender employee was fired because she used the women’s bathroom and had not had gender surgery.28 Etsitty affirmed the grant of summary judgment against Ms. Etsitty’s Title VII claims citing to Holloway, Sommers and Ulane. Although Etsitty held that “transsexuals” are not a protected class, it also held that a transgender person, like anyone else, is empowered to bring a Price Waterhouse claim against an employer for sex stereotyping. Further, the court allowed that “[s]cientific research may someday cause a shift in the plain meaning of the term ‘sex’ so that it extends beyond the two starkly defined categories of male and female.”29

Etsitty compared Brown v. Zavaras30 which allowed the possibility that “transsexuals” might be a protected class for purposes of the Equal Protection Clause of the 14th Amendment to the United States Constitution. Brown noted that “[r]ecent research concluding that sexual identity may be biological suggests reevaluating Holloway.”31

However, Brown “... declined to make such an evaluation in this case because ... Brown’s allegations are too conclusory to allow proper analysis of this legal question.”32 Likewise, Etsitty’s acknowledgment that scientific research might someday cause a shift in the “plain meaning of the term ‘sex,’” could not be explored in Etsity “... at this point in time and with the record and arguments before this court.”33

Etsitty notwithstanding, Ann Hopkin’s victory against Price Waterhouse heralded a sea-change in the law with respect to transgender protection under Title VII. Glenn v. Brumby34 noted that since the decision in Price Waterhouse, federal courts have recognized with “near-total uniformity” that “the approach in Holloway, Sommers, and Ulane ... has been eviscerated...”35 This change was driven by Price Waterhouse’s holding that “Title VII’s reference to ‘sex’ encompasses both the biological differences between men and women, and gender discrimination, that is, discrimination based on a failure to conform to stereotypical gender norms.”36

The U.S. Court of Appeals, 7th Circuit, followed suit in Hively v. Ivy Tech Community College of Indiana39 holding that “... a person who alleges that she experienced employment discrimination on the basis of her sexual orientation has put forth a case of sex discrimination for Title VII purposes.” As will be noted below, in Zarda the 2nd Circuit took the same approach, citing to Baldwin and Hively.

For additional context, a brief description is provided of the earlier proceedings in the cases now pending before the U.S. Supreme Court:

Mr. Zarda alleged he was fired from his job at Altitude Express Inc. because he failed to conform to male sex stereotypes by referring to his sexual orientation. The court cited long history of precedent that “... claims that being gay or lesbian constitutes nonconformity with a gender stereotype, are not cognizable under Title VII.”42 However, citing to the 2015 ruling by the EEOC, the 2nd Circuit noted that “legal doctrine evolves ...”43

Further, the 2nd Circuit noted two circuits had revisited the question;44 therefore, the court convened en banc to reevaluate the issue. The 2nd Circuit held that “[f]or purposes of Title VII, firing a man because he is attracted to men is a decision motivated, at least in part, by sex.”45 Zarda applied a “but for” causation test and concluded that a gay woman who is subject “... to an adverse employment action because she is attracted to women would have been treated differently if she had been a man who was attracted to women.” The court held “... sexual orientation is a function of sex and, by extension, sexual orientation discrimination is a subset of sex discrimination.”46

In both Bostock and Zarda, the plaintiffs argued that firing someone for being gay or lesbian is per se gender stereotyping for a perceived failure to comply with heterosexual norms. In neither case, for example, were the men fired for acting in a manner in conflict with societal expectations regarding gender expression.

Defendant operated three funeral homes in Michigan. Aimee Stephens (formally known as Anthony Stephens) was fired by the funeral home shortly after she disclosed an intent to transition. The 6th Circuit held “... the Funeral Home fired Stephens because she refused to abide by her employer’s stereotypical conception of her sex.”48 Therefore, the court concluded, “[d]iscrimination against employees, either because of their failure to conform to sex stereotypes or their transgender and transitioning status, is illegal under Title VII.”49

The cases now pending before the U.S. Supreme Court will likely do more than decide the momentous question of the applicability of Title VII to LGBT persons. In deciding whether a person’s sexual orientation or gender identity is separate from or a part of a person’s “sex,” these decisions may well speak to the nature of millions of gay and transgender Americans and, thereby, influence numerous evolving areas of the law which impact these populations.

Alyssa J. Bryant currently works with victims of crime for Legal Aid Services of Oklahoma Inc. in Oklahoma City. She is a frequent speaker on the legal and societal treatment of transgender Americans and co-authored a chapter entitled “Transgender Politics: The Civil Rights of Transgender Persons” in a book recently published by Routledge.