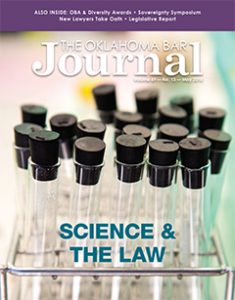 Who Am I? What's in My Future? Who Has the Right to Know?
As a species, 99 percent of our DNA is identical; the remaining 1 percent makes each of us unique. Every cell in our body contains a DNA molecule made up of 46 chromosomes, 23 inherited from our mother and 23 from our father. Inside each chromosome resides a twisted double-helix of DNA: the classic long, twisted ladder you may remember from high school biology. Each rung on that ladder consists of two proteins (called base pairs).

Authoritarian Jurors and How to Spot Them
Litigants in both civil and criminal trials have a constitutional right to an impartial jury. Voir dire is one of the few, and most critical, procedures we have to protect that right.1 The attorney’s goal during voir dire is to identify each prospective juror’s individual experiences, attitudes, beliefs2 and biases.3 It is critical to identify a juror who may be biased against your client before that juror has the chance to side with your adversary.

Legal and Regulatory Developments Arising From the Growth of Cryptocurrency
With the rise of the popular bitcoin, there have been increasing questions regarding the legal, tax and regulatory implications for virtual currencies. Some courts have ruled that digital currency (virtual currency or cryptocurrency), including bitcoins, is “funds” or “money,” thus bringing it within the ambit of federal criminal statutes and, more broadly, the Commerce Clause of the United States Constitution.1 “Blockchain” refers to the technology underlying cryptocurrencies.

Thoughts on Daubert: Oklahoma Expert Testimony Revisited
In 1993, the U.S. Supreme Court in Daubert v. Merrell Dow Pharmaceuticals, Inc.,1 shed the austere Frye2 “general acceptance in the scientific community” standard for admitting expert testimony, ruling that the Federal Rules of Evidence (specifically FRE 702) “occupied the field.”3 Daubert arose from a suit against the manufacturers of Bendectin, an anti-nausea medication prescribed to the pregnant mothers of two plaintiffs who alleged the medication caused their children to have birth defects.

The Decision Advantage: Making Small Data Work for Your Firm
Recently The Economist published an article proclaiming “The world’s most valuable resource is no longer oil, but data.” The author declares that data is “the oil of the digital era,” raising antitrust concerns in an age where long-established tech companies like Google, Facebook and Amazon amass more and more information to spin into profit, while other players lag hopelessly behind. Big data is undoubtedly powerful stuff, but it’s not just for giants to take advantage of. In reality, data has changed the way we think about information and decisions as a culture, from the largest corporation down to the individual level, there is no going back.

Nominate Someone Who Deserves to Be Honored
To some of you, spring may bring to mind images of shamrocks, leprechauns, pastel colored eggs and chocolate bunnies. For others, spring may mean breaks from school and family vacations. In my mind, spring represents the beginning of the OBA Awards Committee’s work for the year. It is the time when we plan our year as a committee and begin to publicize the nominations process. As a working mom of two, I understand how difficult it can be to find a few extra minutes in which to write and submit an OBA award nomination. But consider how a few minutes of your time now can encourage and inspire others to continue serving our community through leadership, public service and service to the profession far into the future.