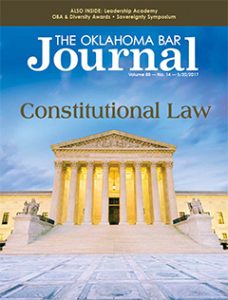 Suing on Shifting Sands: The Oklahoma Constitution, Retroactive Legislation and the Scramble for Clarity
Imagine that it is July of 2014, and you have finally achieved notoriety in life. You’re a celebrity lawyer. Then, unexpectedly, a “friend” publishes a tell-all video on social media maligning you. You are accused of being an incompetent and unethical lawyer, with specific instances outlined as examples (all false, of course). The allegations make rounds in the media and have devastating effects on your practice and reputation.

Hate Speech
America is a culture that is more committed to tolerance of extremist speech than any other in the history of the world. And many citizens do not understand why bigotry, hate, threatening rhetoric, racism, misogyny, homophobia, xenophobia and other “thoughts we hate” deserve any respect, much less constitutional protection.

Citizens United or Citizens Undone?
Jesse Unruh’s observation is one definition of “political fortune.” Another might be discovering your political opponent was convicted of a serious felony. Although popular sentiment may weigh against a candidate with such a background, a felony conviction is not a disqualification for federal office.2As to constitutional requirements,3 the qualifications of a person elected to Congress are judged only by the particular chamber to which the candidate was elected.4 Candidates have run for president from prison,5 and a felon was elected to the House of Representatives.6 Of course, some treat the words “felonious politicians” as a pleonasm.7

An Appellate Practice Pointer from Citizens United
Alot of attorneys have been there. You win or lose in the district court and face an appeal. You suddenly realize you did  not raise or strongly argue a facial challenge or a particular policy argument in the lower court, choosing other points that seemed stronger than what looked on the surface like a rabbit hole. After all, facial challenges to legislative acts rarely prevail.1

First Amendment, Equal Protection and Invisible Children
The king is in legal contemplation the guardian of his people, and in that amiable capacity is entitled (or rather it is his Majesty’s duty, in return for the allegiance paid him) to take care of his subjects as are legally unable, on account of mental incapacity, whether it proceed from first nonage [children]: second, idiocy: or third, lunacy: to take proper care of themselves and their property.

Debatable or Not Debatable: A Clearer Test of Qualified Immunity
In Mullenix v. Luna,1 the United States Supreme Court tightened the reins on the qualified immunity test and its application, resulting in what may be a significant alteration of qualified immunity jurisprudence in the future. The result of Mullenixis a test more in line with the original purposes of the qualified immunity doctrine, which had, over time, gradually become undermined

Leadership Academy: Search for Future Bar Leaders Underway
I am proud to announce the Oklahoma BarAssociation will host its sixth OBA Leadership Academy, one of the association’s premier programs designed for Oklahoma lawyers who want to learn more about bar leadership and may be at a point where bar leadership is a way they can give back to our association. The academy focuses its programming in areas that prepare participants to serve our profession, our bar and our citizens in a variety of leadership roles. It is the perfect forum to promote the goal of recognizing and celebrating lawyers who volunteer, serve and give of themselves.