The Back Page | A Silent History

While Oklahoma often revels in its colorful past, it’s invested in keeping the bloody stains of its history hidden. Our state has a treacherous secret it now struggles to keep in the deep caverns of the past: the pre-statehood divestiture of Indian lands and the transfer of natural resources to white settlers, speculators, oil tycoons and ranchers. 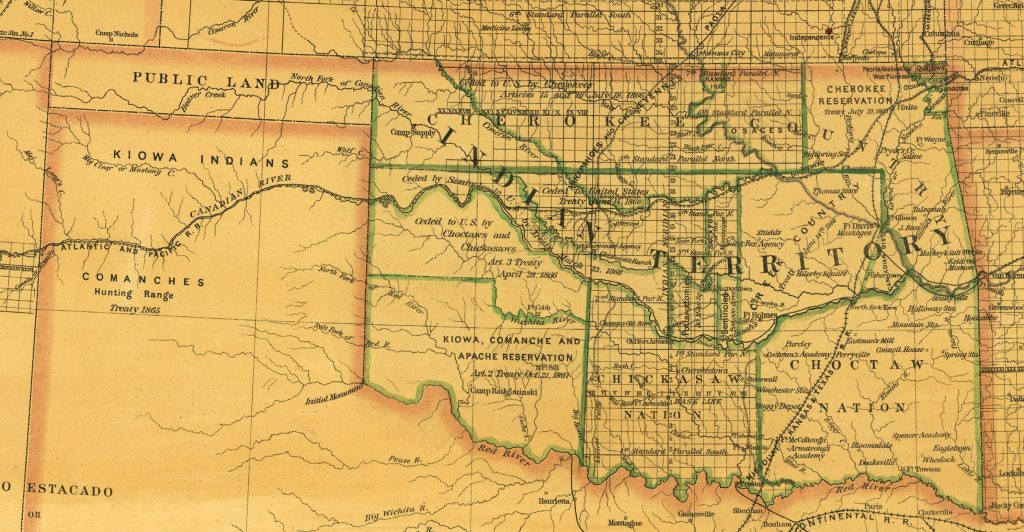 Angie Debo, the late historian, wrote that liquidating Oklahoma’s tribal holdings in the last part of the 19th century and early 20th century “was a gigantic blunder that ended a hopeful experiment in Indian development, destroyed a unique civilization, and degraded thousands of individuals.” This is an understatement.

In summary, the Choctaws, Chickasaws, Muscogees, Cherokees and Seminoles lost their lands in the Southeast in return for most of present-day Oklahoma. Because of Civil War alliances with the Confederacy, the Five Tribes lost the western half of the state. Despite solemn treaty promises, the federal government failed to keep white settlers out of Indian lands.

Each of the Five Nations owned their lands in common, meaning each person owned the whole, but none owned individual tracts. Each tribe had its own law and courts but no jurisdiction over white settlers. The federal courts had little control over the lawless desperadoes of Indian Territory and even less over the white squatters and permitted residents. By 1890, non-Indians made up over 60% of the population.

In the late 1800s, Congress passed laws requiring that Indian lands owned in common be divided up and individual lots distributed to individual tribal members, with the surplus properties sold or held for white settlement. The Five Tribes each negotiated agreements to do this as the best of no good options. For most tribal members, the concept of singular ownership of property made as much sense as owning the air.

Predatory private interests snatched much of the land as soon as the properties were distributed, and tribal controls lessened. Political patronage guided the appointment of federal administrators for the land transfers, many of whom were incompetent, ignorant and/or corrupt. A guardianship system to protect Indian rights utterly failed, particularly after the discovery of oil, resulting in the sale of valuable minerals rights for pennies. In the meantime, mixed-blood tribal members and land speculators pushed to remove restrictions designed to protect Indian ownership of the allotted lands so resource rich properties could be acquired for cheap. Historian Debo describes the Indian dispossession as “an orgy of exploitation ... almost beyond belief.”

Originally published by Princeton University Press in 1940, Angie Debo’s book, And Still the Waters Run, unravels in detail a complicated public/private swindle, featuring many forces and players to take the land, resources and wealth from the Five Great Tribes and put them into hands of white people. Realizing the stain and the secrets of this so dark episode, the University of Oklahoma Press refrained from publishing this very well researched and documented manuscript.

Read the book. After being dumbfounded and appalled, you will find yourself asking, why didn’t I know this? Why weren’t we taught?

Mark S. Darrah is a writer and a general civil and probate practice attorney in Tulsa.