The news has been full of storiesdetailing the impact of unforeseen events, such as worldwide pandemics, extreme weather events and international conflicts on particular industries. For example, a CNN business article dated March 13 discusses the impact of the conflict between Ukraine and Russia on American gasoline prices. “Why are US gas prices soaring when America barely uses Russian oil?” asks Julianne Pepitone, CNN Business. But have you ever stopped to consider the impact of similar events on your electric utility bills?

In contrast to prices charged by private, non-regulated companies for their products and services, prices charged by public utilities must be reviewed and approved by the state regulatory agency whose responsibility it is to oversee prices, called rates, charged by public utilities. In Oklahoma, the Oklahoma Corporation Commission is the regulatory agency charged with the general authority to review and approve the costs charged by a public utility operating in Oklahoma.1 The purpose of this article is to provide a brief description of public electric utility rate cases, the legal framework behind them, the public policy supporting them, as well as an overview of the ratemaking process, including a note on the specific circumstances that led to the filing of rate cases to recover the extreme costs incurred by public utilities during Winter Storm Uri in February 2021. 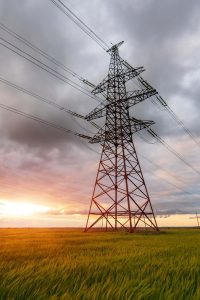 The prices regulated electric utilities charge in exchange for providing customers with electricity are determined through an open, public process called a rate case. Rate cases seek to balance the needs of customers and the public electric utility with the specific public policy goal of ensuring Oklahomans have safe, reliable electric service at reasonable rates.8During a rate case, the reasonable costs for the public utility to provide electric service are determined, and the amount of money the utility will collect through rates to provide that service in a safe and reliable manner is calculated. This process of establishing rates of payment is known as “ratemaking.”

When a public electric utility operating in Oklahoma wants to increase its rates, it must file an application for a general rate change with the Oklahoma Corporation Commission.9 Such applications “shall be given immediate attention” by the Corporation Commission.10 Along with the application, a public utility seeking a rate change must also submit substantial documentation to establish the utility’s costs and to support the rationale behind the requested rate increase “application package.”11The supporting documentation contained in an application package generally includes the utility’s costs of labor; costs of materials, including fuel and purchased power;12 taxes and depreciation on the plant used to deliver services, as well as the interest for debt issued by the utility to finance construction of that plant and a proposed reasonable return on investment made by the shareholders.13 These amounts added together are the revenue requirement the public utility wants to collect from its customers in the form of future billings.14 Only costs determined to be reasonable and prudent by the Corporation Commission are allowed to be included in the revenue requirement.15

The application package should also contain supporting documentation of the utility’s proposed rate design. The goal is to design a rate that allows the public utility to recover its revenue requirement, is “weather normalized”16 and appropriately allocates the revenue requirement among the different groups or classes of utility customers, such as residential, industrial and commercial, based on the reasonable cost of such service and in a non-discriminatory manner.17 Other goals of a particular rate design may be to encourage resource conservation or ensure a rate charged to a particular class of customers is consistent with the costs of providing such service.18 The goals and reasoning in support of a particular rate design are explained in written testimony included in the application package.

Once a public utility has filed an application package seeking a rate increase, it is required to make a “good faith” effort to serve notice of the rate case on all affected utility customers.19 Notice of any hearing on the application must also be published “once a week for two (2) consecutive weeks at least fifteen (15) days prior to hearing in a newspaper of general circulation published in each county in which are located utility customers affected thereby, unless the Commission directs otherwise.”20

The Public Utility Division staff (PUD staff) of the Corporation Commission has 120 days from the date of filing to complete its examination of the application package.21This 120-day examination period is essentially the discovery phase and includes the exchange of data requests and responses between the utility and PUD staff, as well as the filing of testimony responsive to the application package by PUD staff.22The utility also has the opportunity to file rebuttal testimony.23

The Office of the Oklahoma Attorney General (AG) is also a party to rate cases and represents the interests of residential customers.24 During the 120-day period, the AG may request information from the utility regarding the revenue requirement and/or rate design and file written testimony and/or statements of position responding to the application package.25 Over the past few decades, other parties representing a particular class of customer or special interest group have begun intervening in rate cases, which is permitted by OAC 165: 5-7-61. During the 120-day period, the utility also works actively to resolve as many issues as possible with PUD staff, the AG and intervenors. Customers and the general public are also permitted to file comments voicing concerns.26

Public Hearing Requirements and Issuance of a Final Order

If the public utility is unable to resolve all issues with PUD staff, the AG and any intervenors, the Corporation Commission will resolve them in an order to be issued after the public hearing.2728This public hearing can be handled by an administrative law judge (ALJ) or the commissioners sitting en banc and must commence within 45 to 180 days of the end of the PUD staff’s examination period.29 At the public hearing, witnesses who filed written testimony are made available for cross-examination on their positions.30 Members of the public are also allowed an opportunity to make oral comments. 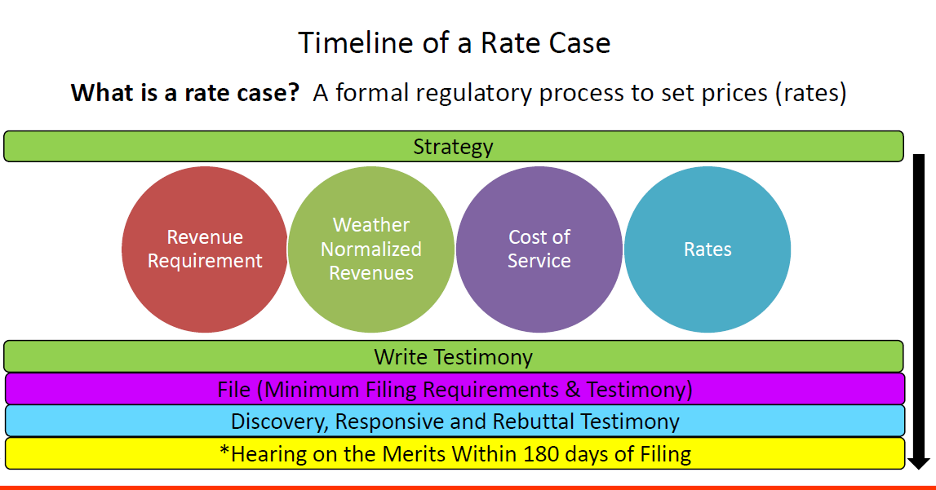 If, however, the Corporation Commission has not completed its examination and issued a final order within the 180-day statutory period, 17 O.S. §152 authorizes a public utility to put into immediate effect and collect “some or all of the request for changes in rates, charges, and regulations” on an interim basis.31

If the Corporation Commission, after completing its examination of the public utility’s rates and charges, determines a refund of the interim rate is appropriate and necessary, the Commission “shall order such refund including a reasonable interest at the one-year U.S. Treasury bill rate accruing on that portion of the rate increase being refunded for a period not to exceed ninety (90) days from the date of the rate increase being refunded.”32

Winter Storm Uri is the name given to the widespread winter weather storm that descended across a large part of the United States and into parts of Mexico in February 2021. Uri swept in fast, causing historic winter freezing weather and resulting in winter weather alerts, power outages and North American Electric Reliability Corporation33 (NERC) reliability events across Oklahoma and other neighboring states, such as Texas and Arkansas.

Specifically, the unprecedented low temperatures and extensive ice storms brought rapid well and pipeline freezes to an extent not seen before, resulting in a shortage of natural gas. The shortage of natural gas deprived the entire natural gas market of large quantities of gas, leading to widespread power curtailments and blackouts in Texas, as well as never before experienced prices across the region. In fact, Uri is credited with causing the largest U.S. power outage since the outage that occurred in the upper Northeast in 2003 that resulted in a blackout affecting an estimated 50 million people.34 Due to the recurrence of below-freezing temperatures for multiple days, the impact of Uri was felt in Oklahoma from Feb. 13 to Feb. 21, 2021.

On Feb. 12, 2021, Oklahoma Gov. Kevin Stitt issued Executive Order No. 2021-06, in which he declared a statewide emergency due to “extreme freezing temperatures and severe winter weather including snow, freezing rain, and wind beginning February 7, 2021, and continuing.” In his declaration, Gov. Stitt further stated, “There is hereby declared a disaster emergency caused by severe winter weather in all 77 Oklahoma counties that threatens the public’s peace, health and safety.” The Corporation Commission subsequently entered two emergency orders related to Uri and resulting conditions on limited gas supply, prioritization of electric and gas service for public health, welfare and safety and the need for conservation efforts.

Because demand for natural gas escalated dramatically due to the consequences of Uri, natural gas markets across the region experienced a profound crisis. Wholesale electricity prices also experienced unprecedented increases in cost due to the unusually high natural gas prices. Costs incurred by public electric utilities for fuel and wholesale electricity are normally passed to customers through a Fuel Cost Adjustment Rider (FCA).35 However, the cost of natural gas during Uri significantly exceeded the entire amount budgeted for fuel and purchased power by some public utilities in 2020, which would have resulted in a burdensome outcome to ratepayers.

To address this issue, the Oklahoma Legislature drafted the Regulated Utility Consumer Protection Act,36 enacted by Gov. Stitt on April 23, 2021. This allowed affected public utilities to securitize the right to recover “extreme purchase costs”37 associated with Uri from Feb. 7 to Feb. 21, 2021. The act also permits issuance of bonds to enable customers to pay costs associated with Uri at a lower annual over a longer period of time.

Pursuant to the act, several public utilities in Oklahoma requested permission to defer all recovery fuel and purchased power costs as amortized over a longer and more manageable period of time. In response, the Corporation Commission allowed amortization of the extraordinary costs of Uri over a period of 10 years.38

Winter Storm Uri, which struck a large portion of the United States with freezing precipitation and below-freezing temperatures, caused wellhead and pipe freezing that ultimately resulted in numerous outages, as well as the implementation of curtailment measures. Another result was the extreme increase in natural gas and wholesale electric prices across the region. Rather than simply pass the extraordinary costs caused by Uri through a general rate increase, which would have been a hardship on Oklahoma utility customers, public electric utilities have taken advantage of the Regulated Utility Consumer Protection Act.39As a result, Oklahoma consumers will be impacted less due to the ability to amortize the costs of Uri over a longer period of time.

Jennifer Castillo is a senior attorney, manager RIM at OGE Energy Corp. She earned her J.D. from the OCU School of Law in 2002 and will complete an LL.M. in litigation management from Baylor Law School in June 2022.