Marijuana and the Workplace: A Case Study

By Michael A. Furlong and Laura McConnell-Corbyn

“Drug Testing,” a 2006 episode of the hit TV series The Office, opens with the intrepid corporate climber, Dwight Schrute, discovering marijuana on the premises of the fictional company, Dunder Mifflin.1 Never one to overlook the slightest possibility of an infraction by a colleague, Dwight springs into action to identify the culprit, interrogating his fellow employees and doling out “random” drug tests. Dwight’s overreaction prompts his colleague, Jim Halpert, to reflect that the presence of drugs in the workplace may be riskier than drug use itself. His antics, while more amusing than successful, provide a useful case study for a number of issues surrounding marijuana and the workplace.

Dwight’s shocked reaction reflects the widely accepted consensus that drugs do not belong in the workplace. Oklahoma law supports the right of employers to keep their worksites free of drugs and alcohol.2 While certain limited protections exist for employees recovering from addiction (discussed below), the Americans with Disabilities Act (ADA) expressly permits employers to prohibit the use or being under the influence of illegal drugs, including marijuana, in the workplace.3 Going further, employers with federal government contracts or grants and employers that operate in the commercial or public transportation sector are required by federal law to maintain a drug-free workplace.4 The same goes for federal government employers5 and the majority of state and local government employers.

Savvy employers will recognize the imperative of taking a proactive approach when it comes to drug and alcohol use by employees. Mishandling issues with impaired employees can result in significant liability for an unprepared employer.6 Indeed, Oklahoma law encourages employers to think through drug and alcohol issues in advance by conditioning the ability of employers to conduct drug testing (discussed in the following section) on having a written policy.7

Later in the episode, Dwight Schrute demands that temporary employee Ryan Howard allow his car to be searched after learning Ryan attended a party the night before. The right of private employers to conduct searches of employee property while on the employer’s premises, including searches for drugs, is not prohibited by federal or Oklahoma law.8 Private employer searches of employee vehicles have been expressly permitted in Oklahoma since 2003 with the following limitation:

Employers of this state that conduct employee-owned vehicle searches of its [sic] employees shall conduct such search on the property of the employer only. Searches that are conducted on property not owned or rented by the employer shall require a search warrant issued according to law.9

Dwight’s investigation next turns to a demand that his colleagues submit to drug testing. When questioned, human resources representative Toby Flenderson confirms all employees agreed in writing to random drug testing when they applied for the job.

Oklahoma law permits most employers to engage in drug testing, including random drug testing, if they comply with the requirements of the Oklahoma Standards for Workplace Alcohol and Drug Testing Act (the act).11 Understandably, the act exempts drug testing that is “required by and conducted pursuant to federal law or regulation[.]”12

The act permits employee drug testing only under the following circumstances:

With respect to random, scheduled, fitness-for-duty, return from leave and other periodic testing, public employers may only conduct such testing on the following employees:

An employer who wishes to conduct drug testing in one or more of the above categories must “first adopt a written policy setting forth the specifics of its drug or alcohol testing program[.]”15 The policy may include such topics as a statement of the employer’s policy respecting drug or alcohol use by employees; which applicants and employees are subject to testing; circumstances under which testing may be requested or required; substances that may be tested (stating “drugs and alcohol” is sufficient); testing methods and collection procedures (which are addressed in great detail in the act and usually, but not always, are written into the methodologies of reputable labs); consequences of refusing to undergo testing; potential adverse personnel action which may be taken as a result of a positive test result; the ability of an applicant and employee to explain, in confidence, the test results; the ability of an applicant and employee to obtain copies of all information and records related to that individual’s testing; confidentiality requirements; and appeal procedures if any.16

Employees must be provided at least 10 days’ notice of a new policy or a change to an existing policy, and a copy must be provided to all applicants upon accepting employment with the employer.17  Employers who violate the act may be held liable for twice an employee’s lost wages, costs and attorney’s fees.18

Prior to 2011, the act required Oklahoma employers to include an employee assistance program (EAP) in order to have a valid drug and alcohol testing program.19 That requirement has been repealed by the Legislature. While employers may still provide EAPs on a voluntary basis, the presence of an EAP in a private employer’s policy is frequently a sign the policy has not been revised in several years and should be reviewed and updated as needed. State employees may avail themselves of the Oklahoma Employee Assistance Program administered by the Oklahoma Department of Mental Health and Substance Abuse Services.20

Certain limited protections exist for employees identified as having used illegal drugs. The ADA prohibits discrimination on the basis of disability by employers with more than 15 employees. Its definition of an “individual with a disability” excludes any “employee or applicant who is currently engaging in the illegal use of drugs,” including marijuana. But the statute provides a “safe harbor” for any employee who: 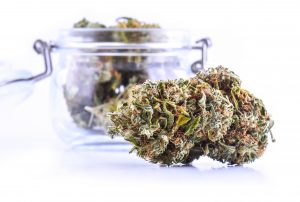 Notwithstanding the foregoing, the ADA provides an employer “may hold an employee who engages in the illegal use of drugs or who is an alcoholic to the same qualification standards for employment or job performance and behavior that such entity holds for other employees, even if any unsatisfactory performance or behavior is related to the drug use or alcoholism of such employee[.]”22

The implementing regulations of the Family and Medical Leave Act (FMLA), which applies to certain employers with 50 or more employees, permits employees who are absent from work for substance abuse treatment for themselves or family members to avail themselves of FMLA leave but not employees who are absent because of substance abuse itself.23 The regulations contain the following caveat:

Once again, the existence of a well-drafted drug and alcohol policy is paramount for employers to establish compliance with state and federal law.

Unless a failure to do so would cause an employer the potential to lose a monetary or licensing-related benefit under federal law or regulations, an employer may not discriminate against a person in hiring, termination or imposing any term or condition of employment or otherwise penalize a person based upon either:

1)  The status of the person as a medical marijuana license holder; or

Although the above provision remains in force, the Legislature’s 2019 Unity Bill clarified the law and provided additional protections for employers as follows:

Unless otherwise required by federal law or required to obtain federal funding:

A “safety-sensitive” job is broadly defined as “any job that includes tasks or duties that the employer reasonably believes could affect the safety and health of the employee performing the task or others[.]”29 It includes, without limitation:

It is highly advisable that Oklahoma employers designate positions as safety sensitive upfront and notify employees in those positions that they are prohibited from medical marijuana use as a result. Employers should review position designations periodically and update them as needed, similar to a periodic review of whether positions are exempt or non-exempt for purposes of the federal Fair Labor Standards Act.

The Unity Bill provided some protection and clarification for Oklahoma employers, but questions remain. For example, while employers may not discriminate against employees solely on the basis of possession of a medical marijuana card, does an employee’s possession of a card give an employer grounds to conduct “for-cause” testing under Oklahoma’s drug testing statute? Is the meaning of “under the influence” the same as having a positive test, or must additional factors exist?33 What protections, if any, are afforded to employees using medical marijuana under the Oklahoma Anti-Discrimination Act (OADA)?34 In the absence of future clarifying legislation, litigation will no doubt be necessary to provide definitive answers to these and other questions.

In spite of his valiant attempts (spoiler alert), Dwight Schrute never does figure out which of his colleagues dropped the joint in the parking lot. Like many Oklahoma employers, however, his investigatory efforts are (mostly) supported by Dunder Mifflin’s drug policy and applicable law. Ultimately, the most important step Oklahoma employers can take to navigate issues of employee marijuana use while remaining on the right side of the law is to have a detailed substance abuse policy that is clearly written, promulgated to all employees and consistently enforced.

Michael A. Furlong is a partner at Hartzog Conger Cason LLP. He practices in litigation and employment law and regularly speaks on employment law issues. He is a 2012 graduate of the OU College of Law.

Laura McConnell-Corbyn is a partner at Hartzog Conger Cason LLP. She practices in family law, litigation and employment law and is active in the labor and employment law sections of the Oklahoma and American bar associations. She is a 1987 graduate of the OU College of Law.