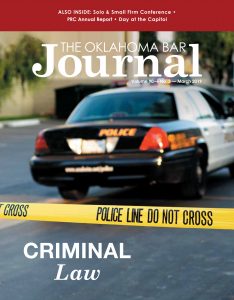 Managing Expectations in Criminal Tax Defense - Yours and Your Client's
As a criminal defense attorney, the prospect of squaring off with the Internal Revenue Service and the Department of Justice may seem daunting. An accounting-heavy case is outside your bailiwick, or at least the cases you usually defend. The opposition is formidable. The imbalance of litigation resources is especially pronounced. After all, in this world nothing can be said to be certain, except death and taxes. Despite those concerns, a criminal tax case is, at its core, just another criminal case – albeit with a few distinctive facets. It has a familiar plaintiff with a familiar burden to provide evidence in accordance with familiar rules. Taking the time to learn the unfamiliar particularities of criminal tax enforcement cases can give you the confidence to competently and tactfully represent future taxpayer clients.

The iPhone, the Speaker and Us
“Alexa, what time is it?” That’s normal to ask these days. We have come to expect answers to such questions, especially in this age of Alexa, Siri, smartphones and devices.1 What about, for example, this question: “Alexa, who killed Victor?” Too farfetched? Actually not.

Holt v. Hobbs
Religious liberties are one of only a few constitutional rights prisoners retain upon entering confinement. However, even these rights are limited. American prisons have systemic safety and tracking issues which must be considered in analyzing prisoner requests for accommodations for religion. Courts across the country have struggled with this issue for decades and, unfortunately for prisoners, nearly absolute deference has been afforded to prisons to deny religious accommodations – until recently.

Not So Hypothetical After All: Addressing the Remaining Unanswered Questions About Self-Driving Cars
The last time we wrote about self-driving cars, we presented a hypothetical in which one of those cars killed a person.2 At the time, industry experts imagined it would be at least 2020 before self-driving cars would flood the streets, and as a corollary, it would probably take that long, if not longer, until the worst possible scenarios came to pass.3