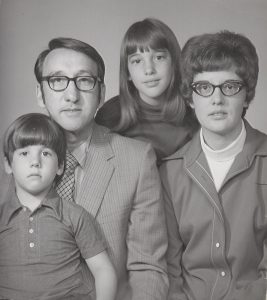 With a quiet nature and approachable demeanor, 2020 OBA President Susan B. Shields may not seem like the kind of person who has lived a life of adventure, but she has. Most of the adventure Susan has seen comes from her willingness to say “yes” when opportunity presents itself.

Susan’s parents met at a YMCA dance and settled on raising their family in Bartlesville, her father’s hometown. “I had a happy, normal childhood. My younger brother, Scott, and I were far enough apart in age, about three and a half years, so we really weren’t in school together after grade school. We fought some, but for the most part, we got along.”

YOUNG SUSAN
As home to the Phillips Petroleum Co., she recalls her hometown fondly during her school years. “There were two high schools back then and our schools were excellent, thanks in part to the influence of Phillips. It was a nice place to grow up, and I appreciate it much more today than I did when I left for college.”

With a lawyer father and an artist mother, Susan was raised in a home that allowed her to try new things and follow her heart. “I started playing piano in grade school, and I was in marching band and orchestra all through school, including college. I played the oboe and the saxophone.” She even participated in student government and also gave athletics a try, specifically track and field, cheerleading and basketball. “Because I was tall, I played basketball in middle school. Unfortunately for me, at least three of the girls I went to school with went on to play Division I sports in college, and I was not a superstar basketball player.”

Travel was also a staple of her childhood. “We took a lot of driving vacations back then. I have a clear memory of my brother and I sitting in the back seat of our giant silver station wagon. We drove it to Maine and back, hitting all the major stops along the way. I still really enjoy traveling.”

Her first job, outside of babysitting for family friends and neighbors, was at the Bartlesville Public Library. “I worked mostly in the children’s room at the library. I enjoyed the summer reading hours where kids would come
in and get to hear stories.”

CALIFORNIA OR BUST
When the time came for Susan to attend college, she packed her bags and headed west with her eyes set on California – Stanford University to be exact. “When it comes down to asking why I chose Stanford, the short answer is that I got in. It was a life-changing experience. My undergraduate major was public policy, which is a hybrid of sorts, with classes from all different departments.”

With a bachelor’s degree under her belt, Susan knew she wanted to continue living in California while pursuing graduate studies. “I loved living in California and chose UCLA for law school. Northern California is my favorite but the beaches are better in Southern California.” Her original plan was to pursue a graduate degree in public policy while also attending law school. “I knew I wasn’t going to go very far with anything related to science. My dad was a lawyer so I’d learned about being a lawyer from him. I ended up not getting a master’s in public policy and stuck with law school.”

After graduating from law school in 1989, she began her career in private practice with a firm in San Francisco. It was at that first job that she witnessed the 1989 Loma Prieta earthquake that hit the San Francisco Bay area on Oct. 17. “I had been working there for about a month when the earthquake hit. I remember standing in our office building, looking out the window and watching entire buildings and freeways collapse. It was a lot to take in.” The earthquake killed 63 people and left 3,757 injured.

MOTHERHOOD
In 1991, she moved back to Oklahoma, this time to Oklahoma City. “We didn’t have children yet, but the grandparents were all going to be here. We wanted to be closer to family.” She practiced with Hartzog Conger & Cason until joining McAfee & Taft in 2008. 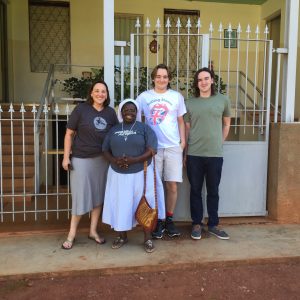 Susan and her sons with Sister Rosemary Nyirumba in Gulu, Uganda, in 2016

Susan’s oldest son, Sam, was born in 1996 and her second son, Ethan, was born in 1998. Both of her sons followed in her footsteps when it came to a passion for music, but not when it came to the profession of law. “Music was such a big part of my life that I got my boys into it. I don’t think they’ll become lawyers, though. Ethan is studying biochemistry at Colorado State and wants to work in genetics. Sam completed the ACM@UCO music program and is now at OU majoring in letters. He’s interested in writing and is in a band, so he will have lots of options.”

When it came to juggling her family and work, Susan tried her best to be present whenever she could. “Being a working mom was always challenging. There’s no magic recipe, you just have to try to find that balance. I will say, one of the hardest things I ever did was be a dugout mom for tee ball. Trying to get those young boys in the right order for the batting lineup was harder than just about any legal problem I’ve ever faced.”

HOBBIES
One of the pieces of her childhood that remains a big part of her life is traveling. Whether with her boys, her fiancé or her friends from college, Susan has seen quite a bit of the world.

The furthest I’ve ever been from home is to Uganda. I have worked with the charities that support Sister Rosemary Nyirumbe’s work in Africa, and we visited her Saint Monica Girls’ Tailoring School in Gulu. Their mission is to combat the terror created by Joseph Kony and the Lord’s Resistance Army through vocational training for young women. When Sam, Ethan and I went to visit the school in 2016, it was like a whole new world. We ate dinner with the nuns there every night and met the children in the childcare facility. I brought a Polaroid camera with me, and we took pictures of all the teachers and children at the school and gave the photos to them. For most of them, that was the only photo of themselves they had ever had.

When she’s not traveling or working, Susan can often be found with a book or in the kitchen baking. She boasted about her chocolate chip cookies and had no trouble listing a book or two when asked for her favorites. After returning from a recent trip with her Stanford freshman dormmates, Susan offered up this bit of advice for her younger self: “Slow down, have more fun and be sure to cherish your friendships.”

PLANS FOR THE OBA
As she steps into her role as president, Susan is focused on her mission: lawyer wellness. “I hope to advance the discussion and focus on the issue of attorney wellness, including our Lawyers Helping Lawyers Assistance Program, during my year as president.” She has an open mind and is ready to listen to members about areas that need improvement. She knows that her time in this role is limited, but she is determined to do what she can to build on the work done by those who came before her. The OBA is in good hands with Susan.