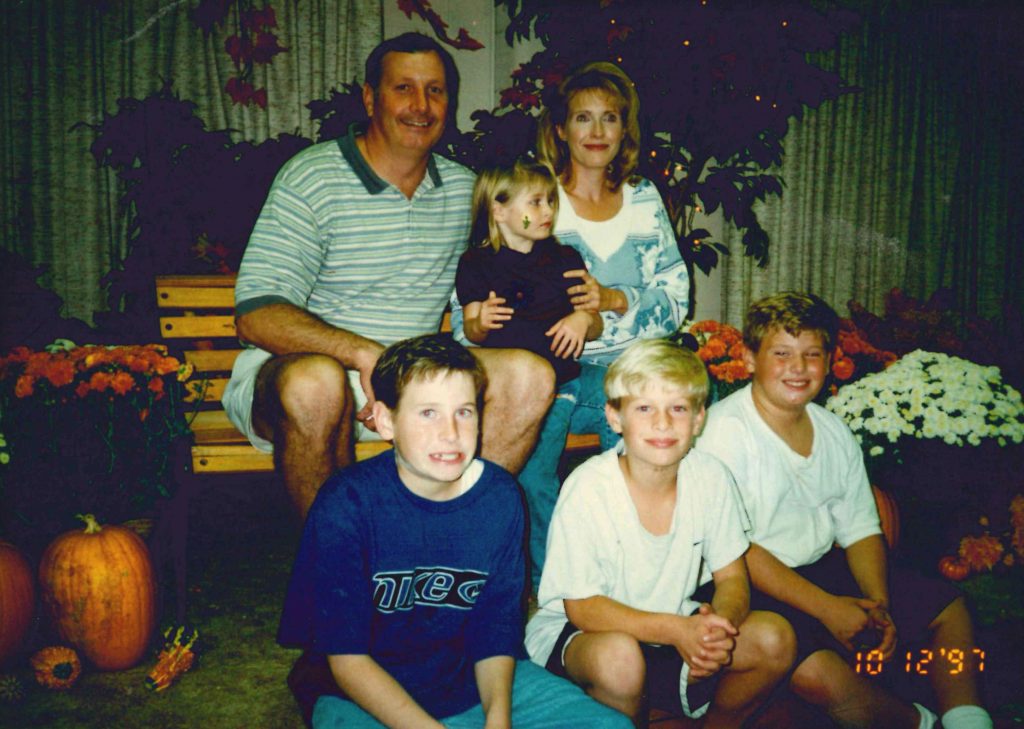 Charles W. “Chuck” Chesnut was born and raised in the small town of Miami, Oklahoma. “Miami was a great place to grow up. You’ve got a lot of great friends, and you never get into a lot of serious trouble, but there were always mischievous things you could get into.” Miami has a population of approximately 13,000 people and is home to Northeastern Oklahoma A&M Junior College.

YOUNG CHUCK
Chuck was the youngest of four children, and the only boy. “My sisters, Elizabeth, 10 years older, Susan, 4 years older and Linda, two years older, thought I was a brat, probably not without reason.” Chuck’s oldest sister, Elizabeth, dealt with his brattiness in particularly ingenuous ways.

At 14, Elizabeth enjoyed reading in an atmosphere of peace and quiet. Being a rambunctious 4-year-old, Chuck’s preferences differed considerably from his eldest sister’s.

One year, Santa left me an awesome drum. I loved the drum. I went around the house beating the drum all day long. Finally, around 4 o’clock that Christmas afternoon, Elizabeth came to me with a pair of scissors. “Chuck,” she said, “I don’t think you understand. Your real present is inside the drum.” She handed me the scissors and of course I cut open the drum to find the real present. I looked at her because obviously there was no present inside the ruined drum. “Oh, I’m sorry” she said as she flounced out of the room. Except for 30 minutes of my uninterrupted crying, she had obtained her objective of peace and quiet the rest of Christmas day.

SMALL TOWN GRAPE LEAVES
Miami’s small-town feel created a sheltered environment for Chuck and his friends to be kids and get into a bit of trouble.

I remember when I was probably 10 or 11 years old and this lady had some grapevine growing on her fence. One of my friends and I went by and we cut off some of the grapevine, lit it and started smoking it. I got home 15 or 20 minutes later and my mother said “so how did you like thegrapevine?” I said, “what” and she replied “well you were smoking grapevine, how did you like it?” I said, “how would you know that?” She said, “the neighbor saw you cutting it and smoking it and she called me.” That’s what happens when you grow up in a small town. Everybody just looks out for everybody else’s kids.

CAREER ASPIRATIONS
Although Chuck always knew he wanted to be an attorney, he once dreamed of different career aspirations. “When I was 4 or 5 I wanted to be a trash collector. I wanted to ride on the trash truck. I thought they had a great job.”

Like most kids, Chuck did odd jobs in the summer. “My mother asked me if I would pull weeds out of a lady’s garden. She had a lot of flowers. I worked really hard for about one day, and she payed me about a dime an hour. Sixty cents if I remember right. I decided that gardening wasn’t one of those things I wanted to do permanently.”

Though his trash collecting or weed pulling dreams didn’t come true, Chuck had an unusual job after high school working at Eastern State Hospital. “My first job out of high school was in a mental institution in Vinita.” Chuck was tall and thin at 6 feet 5 inches and 170 pounds, a prime candidate for working maximum security at the hospital. “The patients were very interesting. You could talk to them about anything except religion and politics. Those conversations tended to stimulate them in a way that wasn’t so good.”

SCHOOL
As a Miami High School Wardog, Chuck played basketball and participated in track and field. “I wouldn’t say that I ran track, but I high jumped. I wasn’t a particularly gifted high jumper, but I did it. I really enjoyed playing basketball. That really was my sport.”

Chuck’s mother, an educator, taught him to read at a young age and guided him through school. “School was never very hard for me. I don’t know that I was a wonderful student but I studied and made good grades.” Law school was a different story for Chuck. After high school, he studied at OU graduating with a degree in business administration. He continued his studies at the OU College of Law. “Law school was very difficult for me. I was trying to study and be prepared and still working two jobs and being married. It was a stressful time. I was glad to be done.” 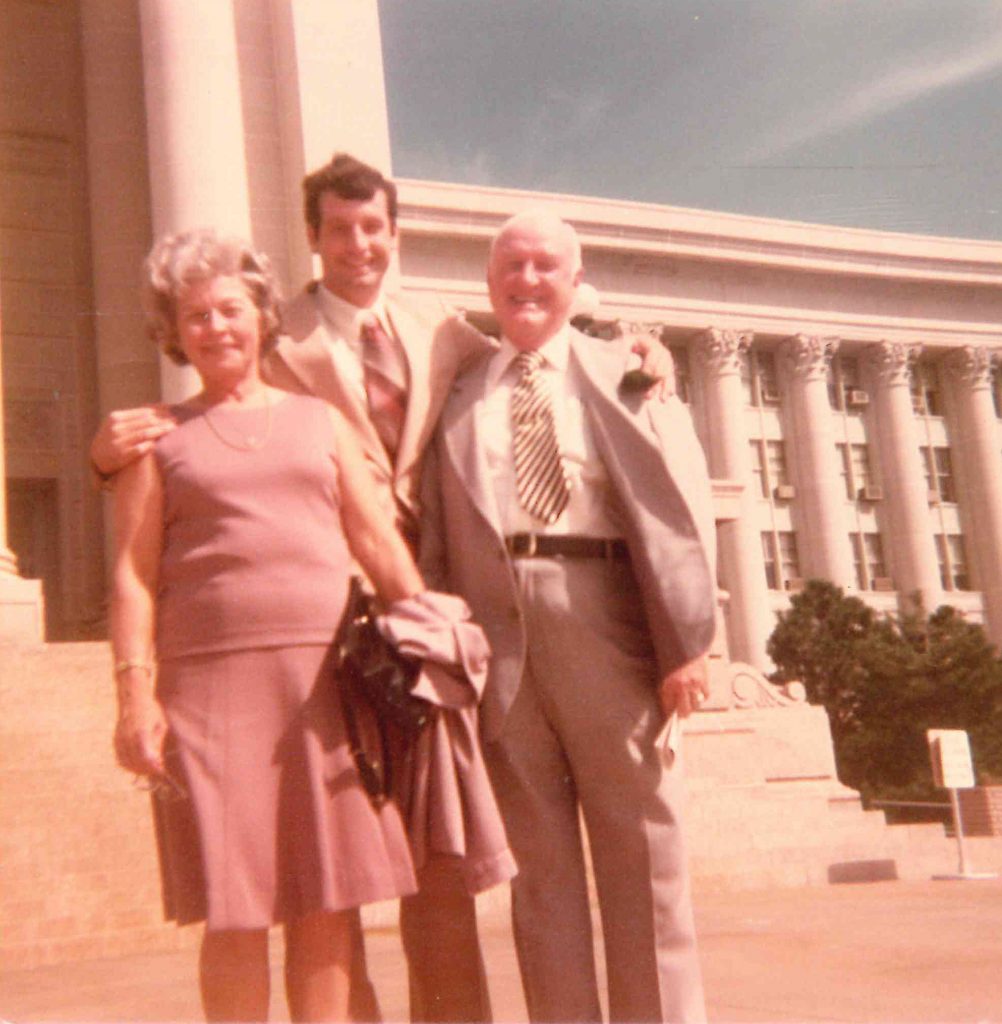 THE PRACTICE OF LAW
As a child, Chuck spent a lot of time around his father’s law practice. “I loved the smells of the books. I loved the smells of the courthouse.” When Chuck wasn’t at school, playing basketball or spending time with his friends, he helped his father with small tasks at the office. “When I was young, I used to run errands for my father. He would pay me a dime every time I’d file pleadings with the court clerk.”

CHUCK AND SHIRLEY CHESNUT
On Valentine’s Day of 1984, Chuck married Shirley Murphy. The two met through a mutual friend. Chuck was newly single when he ran into his family practice physician who is also a close friend. “He said ‘there’s a doctor that’s doing a rotation at the hospital, I think you ought to ask her out.’” Blind dates were not his forte, and he had never had good luck with them before. He suggested to his friend that the two meet first. “I went to the emergency room one night, and I met her. She was very beautiful. I called her up the next day and asked her out. She said no.”

Shirley had also grown up around the practice of law. Both her father and her brother were attorneys. She joined them at the 1983 Annual Meeting held at Shangri La, a resort on Grand Lake. “She came walking across the room and introduced herself. One thing led to another and we started dating and we got married. I guess I have Annual Meeting to thank for my marriage.”

The two have four kids together and two, soon-to-be three, grandchildren. “We have Matthew, Mark, Michael and Laura.” Matthew lives in Oklahoma City working for the Chickasaw Nation. He and his wife have four foster dogs which they have now adopted. Mark is a general manager at a business in Springfield, Missouri and has two children and one on the way. “I get a kick out of being a grandpa. It’s just fun. My only regret is that they are probably 100 miles away.” Michael lives in Hawaii and recently got married. Laura is a third-year law student at the University of Arkansas.

When Chuck and Shirley do get to spend time with their grandchildren, they enjoy sharing meals together and watching them play. “I enjoy just hanging out, watching them play and seeing what interests them.” At dinner time, Chuck usually gets a special invitation. “Wade the 2-year-old will say ‘come sit by me’ and it just warms my heart. There’s nothing like it.”

HOBBIES
When Chuck isn’t working at the office, attending bar events or spending time with his family you can find him on the greens. “I’ve taken up golf later in life. I’m not particularly good at it, but I love being out. I love the guys that I play with. I have a short attention span. I play nine holes and I’m done. It’s just very pleasant.” Chuck especially likes to be on the course in the late evenings when the sun goes down – it’s quiet and he can relax and wash off the day. “It’s beautiful and relaxing. It’s a great stress reliever.”

Chuck also enjoys reading. “I love to read. I always have. My mother taught me to read when I was 5 years old. I have always loved biographies and still enjoy reading them to this day.” Currently, Chuck is most interested in books that make him ponder life’s questions. “Right now, I’m reading stoic philosophers.”

PLANS FOR THE OBA IN 2019
As Chuck takes his place as the 2019 OBA president, one may wonder what his plans are for the year. “The OBA is a little bit like an aircraft carrier. It’s a huge boat that’s very difficult to make sudden turns with but there are always issues that need to be addressed.” As Chuck recognizes, change comes slowly. He hopes to make strides in CLE and making it a better value to members. “Continuing legal education is something that needs to be addressed. The OBA is the market leader right now. We need to explore how we can make it even better than it is.” 2019 is sure to be a successful year under Chuck’s capable leadership.