The Back Page | Mock Trial Brings Out the Best

As the title suggests, the Oklahoma High School Mock Trial program does indeed bring out the best, but in whom? The attorneys judging and scoring? The coaches? The students themselves? The answer is simple: Mock Trial brings out the best in everyone!

Every year, hundreds of Oklahoma high school students gather together in teams to compete in the OBA state tournament. Months of preparation go into this endeavor. Most schools not only have teachers involved but local attorneys as well who volunteer their time to teach fundamentals.

Each team must prepare and then be ready to perform as the prosecution as well as the defense. Through the early rounds of competition, each team will alternate being the prosecution, and then in later rounds, must switch to the defense. (Think how difficult this would be in real life as practicing attorneys!) 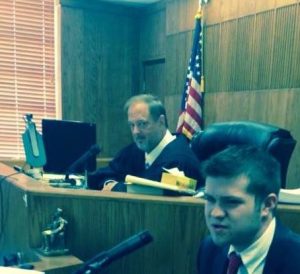 As a former judge from a rural county, I had to deal with the weekly juvenile docket. I not only handled juvenile cases, but the “boot camp” program for the worst repeat offenders was also assigned to me. You might say I was seeing the “worst of the worst” in juvenile behavior, and I began to wonder where all the “best of the best’” were. I FOUND THEM!

They were all participating in mock trial! After being invited to attend my first MLK Tulsa Tournament many years ago, I instantly realized these students were and are our best future. Over the past 14 years, I have personally judged over 100 rounds of competition. I have seen students blossom from nervous ninth graders into seniors with confidence. Each year, there are a handful of “standouts” who actually perform better in trial than some attorneys I have dealt with (by far).

I personally know mock trial students who, after graduating from high school, received scholarship offers from schools such as Harvard, Duke, Pepperdine, Southern Methodist University, Stanford and TU, just to name a few. I have judged these rounds for enough years to have seen students make it through law school. A few are now practicing locally here in the Tulsa area.

As we attorneys begin to “age out” of the profession, it behooves us to ensure that those who come after us are, in fact, the best of the best, not just intellectually but ethically as well. I always end each round by reminding the students that, “A legal education will unlock the shackles of ignorance but then handcuff you to responsibility.”  Mentoring these students is not just a pleasure to me but a privilege as well. The opportunity to help shape and mold the next generation of attorneys is one of the most rewarding projects I have ever been involved with. We are always looking for attorneys who want to judge and score the competition, so if you want to be a part of something great, join us! Learn more about the program, including how to volunteer, at .