By Ashley A. Warshell and H. Terrell Monks 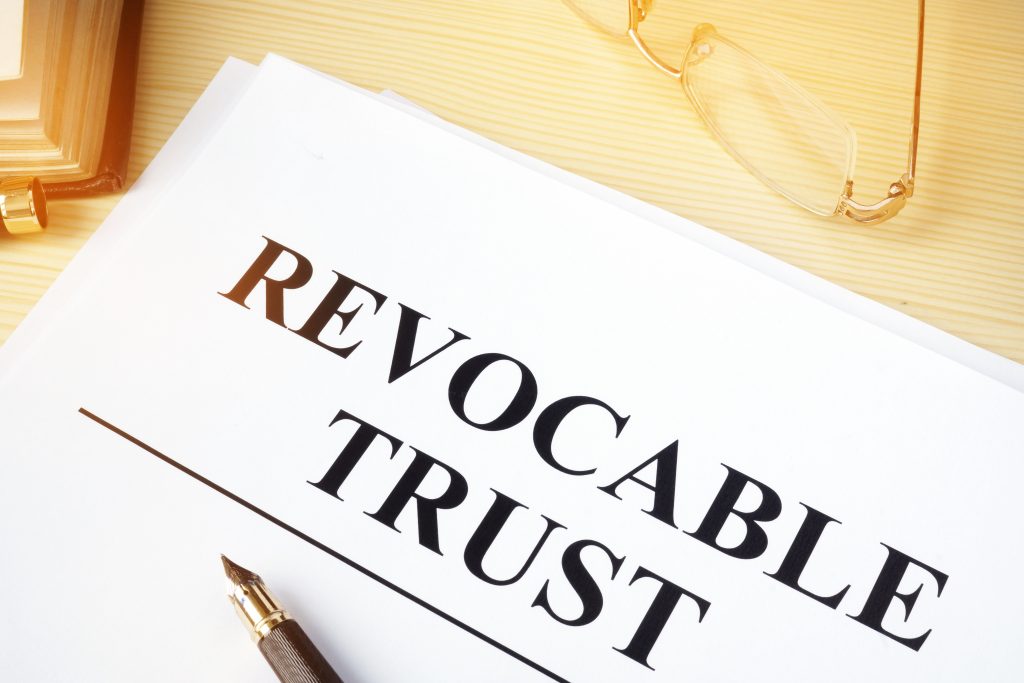 Revocable inter vivos trusts have become a common estate planning tool in Oklahoma and elsewhere, often functioning as a “will substitute” for those who wish to avoid probate and maintain some control over assets after their death. Although estate planning attorneys may presume that similar legal analyses will apply to wills and these estate planning “substitutes,” that is not always the case, even in circumstances this may seem to be warranted as a matter of public policy.1 One of these circumstances, for example, involves the ability of a settlor’s creditors to reach assets in a revocable inter vivos trust upon the death of the settlor.

Although the assets in such a trust are generally available to the settlor’s creditors during his or her lifetime, the beneficiaries normally change upon the settlor’s death, converting the trust into one that is no longer self-settled, and therefore is beyond the reach of the settlor’s creditors. This article discusses the case law and policy considerations implicated in addressing this issue.

THOMAS V. BANK OF OKLAHOMA, N.A.
In Thomas v. Bank of Oklahoma, N.A.,2 the Oklahoma Supreme Court held that a revocable inter vivos trust could not be used to defeat the forced share of a surviving spouse. Although the reasoning of the Thomas court could be extended to the claims of other creditors, no Oklahoma court has done so, leaving the issue unsettled under Oklahoma law.3

In Thomas, the wife funded a revocable living trust with separate inherited assets, appointing herself and Bank of Oklahoma as co-trustees and maintaining full dominion and control over the trust assets until the time of her death.4 The trust agreement directed that, upon her death, the assets were to be distributed equally between her surviving husband and two children.5 The husband elected to take a forced share and demanded that the trust assets be included in the wife’s estate for that purpose.6 Bank of Oklahoma, the remaining trustee, objected, arguing that since the wife did not have legal title to the trust property at the time of her death, it could not be included in her estate or be subject to the spousal share.7 As noted, while the Thomas court rejected this argument on the facts of that case (in the context of a spousal forced-share claim), it is not clear the same decision would result in a case involving creditor claims.

Arguments similar to those in Thomas may be made in response to the claims of other creditors of an estate, e.g., that since the assets were owned by the trustees as such, they pass pursuant to those terms, outside the jurisdiction of a probate court and are not subject to the procedure for paying debts of an estate set forth in 58 O.S. §§1, et seq. Creditors might argue that this should not be permitted, e.g., because it would allow the settlor and trust beneficiaries to avoid the debts of the settlor. Similar to the holding in Thomas, the federal government does not permit this in the context of tax liability; the Internal Revenue Service (IRS) considers property in a revocable trust to be property of the estate for estate tax purposes.8 Applying the reasoning in Thomas, an Oklahoma court would not permit such avoidance in the context of a forced spousal share. But is there also an analytical basis for a contrary rule with regard to ordinary private creditors’ claims? In other words, what policy would be served by distinguishing other types of creditors and excluding them from the same type of protection?

THE OKLAHOMA TRUST ACT
As long as the settlor is living and the trust is revocable, the applicable Oklahoma statute is clear that trust assets may be reached by the settlor’s creditors:

H. Nothing in this act shall authorize a person to create a spendthrift trust or other inalienable interest for his own benefit. The interest of the trustor as a beneficiary of any trust shall be freely alienable and subject to
the claims of his creditors.9

In other words, a revocable living trust for the benefit of the settlor generally does not provide asset protection during the settlor’s lifetime; however, what happens upon the death of the settlor is less certain. The aforementioned statutory provision is limited to settlors who are also beneficiaries – a condition that changes at the death of the settlor. As noted above, the interests of at least two other types of creditors – the spouse electing a forced share and the IRS – have been recognized and addressed in favor of a policy that prevents trustors from using a vehicle designed as a will substitute to avoid paying certain claims that would have otherwise been paid in a probate.10 But are these (IRS and spousal) claims distinguishable on legal and policy grounds from the claims of ordinary creditors, so as to warrant disparate treatment?

BURFORD MANOR INC. V. DEEL
The Oklahoma Court of Civil Appeals addressed at least one variation of this issue in Burford Manor Inc. v. Deel.11 In Burford Manor, the beneficiaries of a trust sought to avoid paying their deceased mother’s nursing home expenses. During her lifetime, the mother (Lela) was the beneficiary of a trust established by her late husband (Homer), which directed the trustee to distribute trust assets for the “health, support in reasonable comfort, best interests and welfare” of Lela.12 However, the trust ended upon Lela’s death, with the trust property passing directly to the successor beneficiaries at that time. On these facts, the Burford Manor court found that, as a matter of equity, the trust assets passed to the successor beneficiaries subject to an implied equitable lien in favor of the nursing home. The court reasoned that:

[A]t the death of Lela, title to the trust’s real property passed to the legatees named in Homer’s will encumbered, however, with an equitable lien for valid trust debts. These constituent circumstances give rise to a significant factor overshadowing the entire situation-one recognized by the trial court-that a cloud of conflicting interests hovered over both of the Lela trust trustees arising from the fact that they were to eventually receive whatever was not spent on Lela during her lifetime.

… “Equitable liens grow out of a duty or obligation on the part of the owner of property to make it answerable for a debt.” Jones on Liens, 3rd Ed., §28.13

Although Burford Manor may weigh in favor of creditors, it fails to provide the bright line rule necessary to settle this issue in the context of revocable inter vivos trusts generally. In Burford Manor, the contingent beneficiaries were also the trustees at the time the debt was incurred, creating some potentially conflicting interests on this issue that might not always be present. Moreover, the doctrine of equitable lien, relied on by the court, is inherently flexible and subject to subjective considerations. Thus, in most cases, reasonable arguments will remain on either side.

For example, the facts of a given case may easily be distinguished from those in Burford Manor, where the defendant successor beneficiaries had direct contact with the nursing home by leaving their incapacitated mother in the nursing home’s round-the-clock care and allegedly promising to pay for its services.14 This could also be viewed as creating a quasi-contractual obligation to pay, or at least as supporting an equitable claim for unjust enrichment. In addition, trust assets had been used to pay for at least some of Lela’s nursing home care before the trustees discontinued payments, perhaps evidencing an implied contract based on a course of conduct.15 In contrast, in many other cases involving a revocable living trust, the creditor and the successor beneficiaries will be strangers both to each other and to the estate plan and the factors relevant in Burford Manor will be absent. In such a case, the court will be left to weigh the equities based on other factors – a discretionary determination depending on the conduct of the parties, the type of debt and other various circumstances. This leaves the courts without a concise benchmark for the consistent resolution of these cases.

THE THIRD RESTATEMENT AND LEGISLATIVE TREATMENT
Outside of Oklahoma, this issue is commonly resolved in favor of the creditor. For example, the Restatement Third of Trusts recognizes a policy in favor of applying substantive restrictions on testation and the rules applicable to testamentary distributions to revocable inter vivos trusts:

This result is not dependent on the trust being “illusory” or “testamentary,” or on the transfer being a fraudulent conveyance, but is based on the sound public policy of basing the rights of creditors on the substance rather than the form of the debtor’s property rights.16

Other states have gone a step further by enacting statutes expressly in favor of the creditor. For example, the applicable Florida statute states that:

(3) Any portion of a trust with respect to which a decedent who is the grantor has at the decedent’s death a right of revocation, as defined in paragraph (e), either alone or in conjunction with any other person, is liable for the expenses of the administration and obligations of the decedent’s estate to the extent the decedent’s estate is insufficient to pay them as provided in §§733.607(2) and 736.05053.17

THE STATUS OF OKLAHOMA LAW
Based on the relevant factors noted above, it is reasonable to surmise that an Oklahoma court would follow the rule of the Restatement (as noted previously), consistent with the statutory approach of the other 10th Circuit states, and as applied in both Thomas and Burford Manor. The counterpoint, that upon the death of the settlor the trust has become irrevocable, does not change the fact that the creditor claims in question (against the settlor) accrued before the settlor’s death and therefore were enforceable against the trust corpus (and should be deducted from it) at the time it passed to the successor beneficiaries. The trustee, as a fiduciary, has a duty to pay such claims and this is not changed by a subsequent death of the settlor or ultimate termination of the trust. This is a simple matter of debtor-creditor law and a duty of the trustee to pay claims against the trust corpus. Furthermore, courts have recognized that agreements contrary to public policy may not be enforceable;24 and Oklahoma law otherwise recognizes a policy in favor of the claims of certain creditors after death.25 Thus, the result in Burford Manor appears to be more broadly grounded in basic legal doctrine than the court’s narrow reasoning would suggest, and the law on this point should be considered clearer than as indicated in the limited Oklahoma judicial authority.

Nonetheless, in the absence of a bright-line statutory or case law rule, neither debtors nor creditors can know for certain where they stand on these issues; and no apparent public policy is served by the current uncertainty in Oklahoma law. Clear guidance from the Legislature or the Oklahoma Supreme Court would be beneficial to the parties on both sides of these issues. The current state of the law presents an opportunity to articulate a more deliberate public policy, based on substance as opposed to form, for the treatment of living trusts now commonly utilized as will substitutes.

ABOUT THE AUTHORS
Ashley A. Warshell is an attorney at Hall & Ludlam PLLC, practicing in the areas of contract drafting and negotiation, civil litigation, estate planning, real estate, consumer financial services law, regulatory compliance and debtor/creditor law. She served as a compliance officer and vice president of Home Savings and Loan Association of Oklahoma City. She has been certified by the National Association of Federally-Insured Credit Unions (NAFCU) as a NAFCU certified compliance officer.

H. Terrell Monks practices estate planning and probate in Midwest City and Edmond. He is an adjunct professor at Rose State College and is a 1997 graduate of the OCU School of Law. He is chair of the OBA Legal Internship Committee and an OBA Law Schools Committee member.