Put it Plainly: How the Use of Plain Language Can Increase Equity and Procedural Fairness in Small Claims Eviction Proceedings

By Katie Dilks and Shandi Campbell

Lawyers are known for their love of complicated language, but legalese is cumbersome and confusing to those who aren’t law trained. Many of our judicial processes and procedures can be accomplished fairly and efficiently using plain language, and this is especially true in areas of law like small claims. Small claims court is known as “the people’s court” for a reason – it’s supposed to be a simpler, faster system to resolve conflicts between people, whether over a disagreement, contract or money. That’s why there are more relaxed rules in this setting for how courts can operate and how people bringing cases (or being sued) can tell their stories. One reason small claims court works this way is because the expectation is that many, if not most, people using it will be there without a lawyer. A section of Oklahoma law even tells court staff to help people without lawyers figure out how to fill out the paperwork to sue someone in small claims. In 1971, Oklahoma lawmakers decided eviction cases should be heard in small claims court because, at that time, most landlords didn’t use lawyers in evictions. Today, though, it’s a different story.

For evictions, in particular, “the people’s court” has shifted to an unlevel playing field where most landlords are represented by lawyers, while the vast majority of tenants remain unrepresented. A study of the Tulsa County eviction docket by students with the Terry West Civil Legal Clinic at the TU College of Law found 82% of landlords had legal counsel compared to only 3.5% of tenants.1 This disparity leads to one party having a translator for the legalese heavily used by courts and lawyers, while the other is left alone to decipher terms like “forcible entry and detainer,” “affidavit” and “judgment under advisement.” This imbalance has a dramatic impact on the outcomes of eviction cases. The TU study found that tenants without representation were almost twice as likely to receive a judgment for eviction (79%) as those with representation (43%).2 Additionally, tenants who appeared in court alone were more than twice as likely to have a money judgment against them (78%) than tenants who appeared with counsel (34%).3 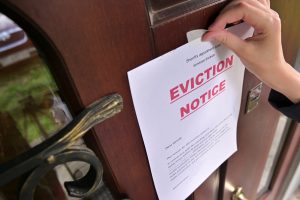 For someone facing eviction, the first (and only) thing they receive to let them know they are being sued comes through the mail or is posted on their door: the summons. In Oklahoma, the Legislature created standardized form language for landlords to use (again, because lawmakers in 1971 assumed most landlords didn’t have lawyers), and the language on that form is difficult to understand. The first sentence starts, “You are hereby directed to relinquish immediately to the plaintiff herein total possession of the real property described as …” It is intimidating and complicated language that doesn’t clearly describe what is happening; however, it is important people understand the court process and what they need to do. Right now, many people who receive this language from the court don’t understand exactly what it means or what they are supposed to do next. This results in a high number of default judgments.

Fortunately, there’s an easy solution to bring the small claims eviction process back to a true “people’s court”: plain language. Many people assume plain language simply means “dumbing down” words, but at its core, plain language means presenting information in a way that allows users to understand what they are reading the first time they read it. This means writers must employ shorter sentences, use active voice, address the reader directly and reduce the reading level. Although experts recommend aiming for a sixth to eighth-grade reading level when creating public materials, Oklahoma’s eviction summons reads at a 14th-grade level, meaning you likely need a college education to understand it. Only 27% of Oklahomans have a four-year college degree.

The modern history of the plain language movement started in 1977 with President Nixon directing the Federal Register be written in “layman's terms” and continued through President Obama signing the Plain Language Act of 2010 that required federal agencies to write clear government communications the public can use and understand. Today, federal agencies are annually scored on the use of plain language in their publications by the Center for Plain Language. These strides have led to an understanding of the benefits of plain language. Simplifying text allows users to find what they need, understand what they find and use what they find to meet their needs.

The use of plain language in courts leads to increased equity and procedural fairness because both represented and unrepresented parties begin, move through and end the legal process with the same opportunity to understand information. It also builds greater trust in the legal process because unrepresented parties aren’t left wondering if they’ve missed a critical component that may have led to a different result. The National Association for Court Management notes two additional benefits of courts using plain language: 1) It can lower the burden on court staff, allowing them to focus on complex issues and other court business, and 2) cases can move through the court more quickly because unrepresented court users better understand the process and their options.4

Three straightforward improvements could help ensure all Oklahomans understand the legal system, especially regarding an issue as important as eviction:

The State of Oklahoma to the within-named defendant:

For the amount of the claim for deficient rent and/or damages to the premises, as it is stated in the affidavit of the plaintiff and for possession of the real property described in said affidavit, whereupon a writ of assistance shall issue directing the sheriff to remove you from said premises and take possession thereof.

In addition, a judgment for costs of the action, including attorney's fees and other costs, may also be given.

You may either leave the property immediately, or you can appear in court to explain why you should not be evicted.

If an eviction judgment is issued against you by the court, you will be removed from the property by the sheriff.

Katie Dilks is the executive director of the Oklahoma Access to Justice Foundation and is committed to building a legal system that works for everyone. She earned her law degree and master's in public policy from Georgetown University.

Shandi Campbell is the director of the Housing Solutions Landlord Tenant Resource Center, where her work is focused on making homelessness rare, brief and non-recurring in Tulsa County. Previously, Ms. Campbell served as assistant city attorney for Enid, staff attorney for the Apache Tribe of Oklahoma civil-legal program and as a contract attorney and mentoring attorney for the Native Alliance Against Violence CIRCLE Project.