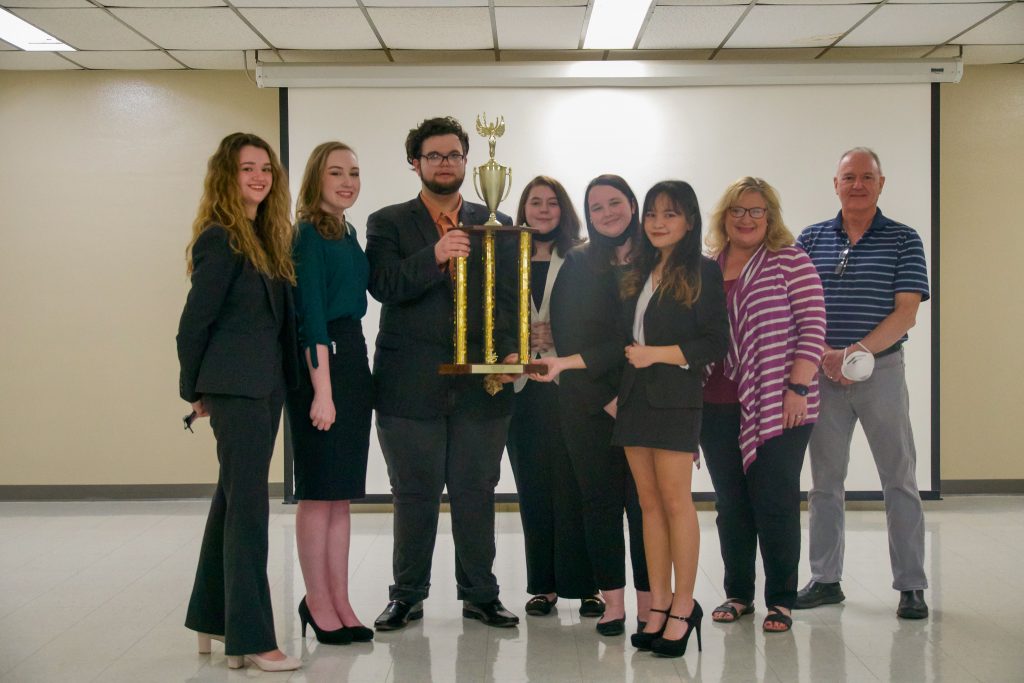 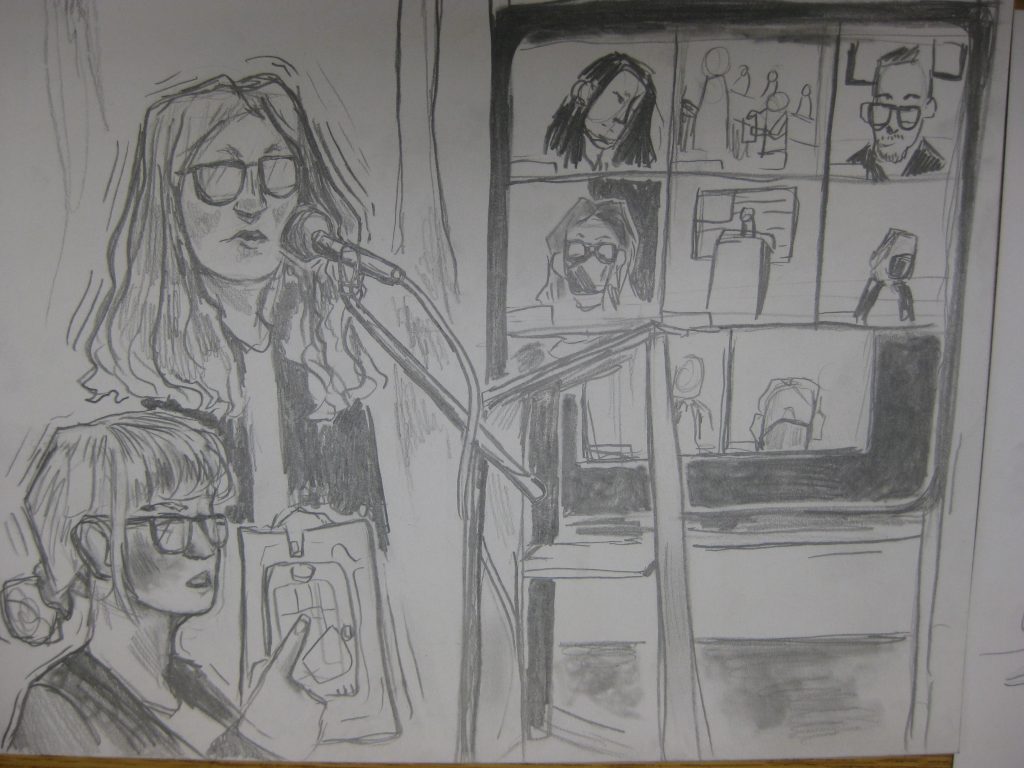 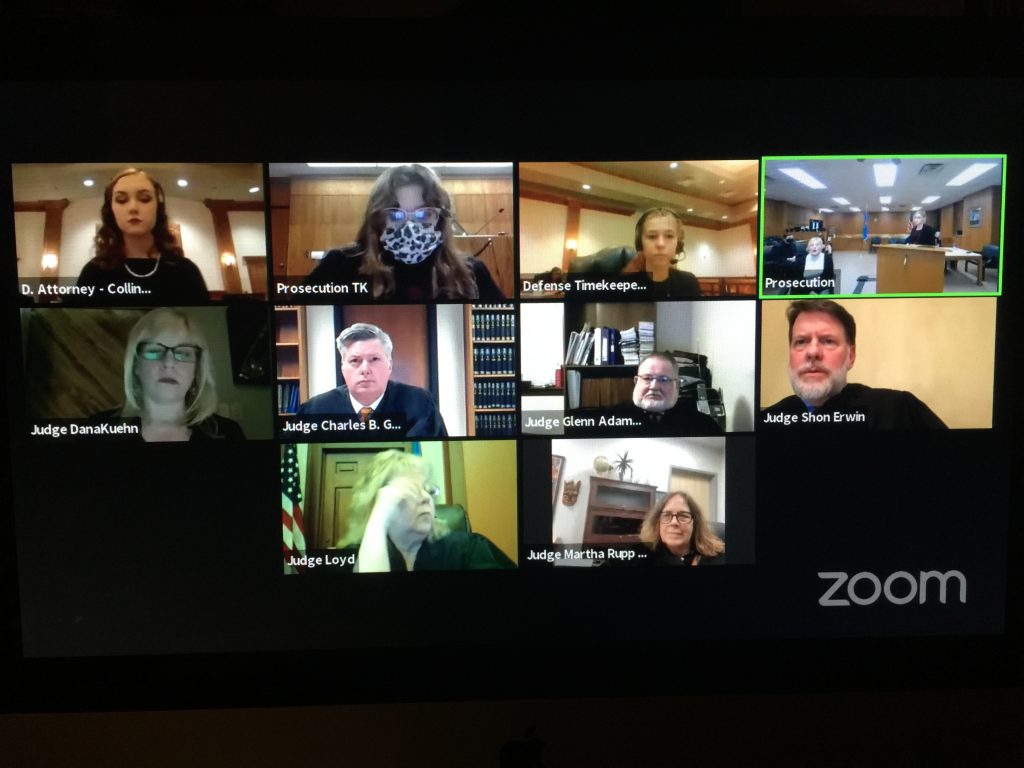 In the program’s 41-year history, it was first time the competition was held virtually.

The Oklahoma High School Mock Trial Program went virtual in 2021. Last fall, faced with a decision to either forego competition this year or attempt a virtual competition season, the Mock Trial Committee began the daunting task of putting together a virtual competition. Equipped with the funding and support of the Oklahoma Bar Foundation, the committee purchased a software platform to host Oklahoma’s first virtual mock trial competition. The software allowed us to remotely manage the competition with the use of electronic ballots, real-time monitoring of multiple virtual courtrooms and quick round results and team rankings.

There were many obstacles to overcome this year beyond learning the software and the practical logistics of virtual trials. There were technical issues, slow or dropped connections and every imaginable type of noise distraction. If that was not enough, Oklahoma experienced unprecedented winter weather during crucial weeks of the competition that resulted in rolling power outages during competition and lack of heat and water not only for the teams but also attorneys and volunteers. We quickly learned Oklahoma high school students are resilient! The students adapted well to the virtual competition, and despite all the hindrances this year, they did not miss a beat. The attorneys who navigated the virtual world, many for the first time, hopefully learned some new technology skills to use in their own practice in the increasingly virtual nature of the practice of law.

The competition used an original case written by the Mock Trial Committee. It was a criminal case involving a long-standing family feud between two families that arose over a botched hanging in the 1800s. When descendants from each of the feuding families are together in the rodeo arena, and one of them ends up dead from an alleged roping accident, first-degree murder charges are levied against the surviving descendant. The witnesses included a local reporter, the investigating police officer, dueling medical examiners and the defendant.

There were 30 teams from 18 different high schools across the state that competed this year.  Over 200 attorneys from across the state donated their time to learn the software platform and score the virtual competition using electronic ballots. The competition consisted of nine days of virtual competition, with two to four virtual courtrooms running simultaneously on each competition day. Dedicated volunteers and committee members worked long hours sitting in front of their computers, overseeing the courtrooms and managing all the administrative work that comes with putting on the competition.

On March 2, the two top-ranked teams competed in the virtual championship round. For the first time, the final round was livestreamed on YouTube. The case was presented to a distinguished, virtual panel of judges, who were Presiding Judge Shon T. Erwin, Judge Charles Goodwin, Judge Dana Kuehn, Judge Janice Loyd, retired Judge Glenn Adams and Judge Martha Rupp-Carter.

The final rankings for the remaining teams that competed in the semifinal round are:

As the reigning state champions, McAlester High School Team Black will represent Oklahoma at the National Mock Trial Competition, which will be held virtually in May. I have no doubt Oklahoma will be well represented on the national stage by this talented team.

Our courtroom artist competition continued to thrive in its third year. With four submissions this year, the winning entry came from Kerah Ward from Broken Arrow Team Black.

I continue to be amazed at the dedication of the mock trial community and its willingness to participate in this program year after year. There is no way to list every person who contributed to making this a successful season. I do want to recognize and thank the Oklahoma Bar Foundation, which funds the mock trial program through the generosity of Oklahoma lawyers. Thank you to the Mock Trial Committee for your time and effort and a special thanks to Kevin Cunningham, the talented architect of the original case this year. As always, a hearty virtual hug to our Mock Trial Coordinator Judy Spencer. She continues to be the guiding star of Oklahoma mock trial.

Closing the chapter on another great season of mock trial, I remain cautiously optimistic for the return to in-person competition next year. In the meantime, the Mock Trial Committee is already formulating a plan for the creation of our own software platform to manage future competitions. If you are interested in being a part of the committee or volunteering for mock trial next year, email mocktrial@okbar.org.