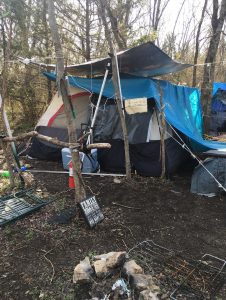 For three and a half years, SB had been living in a tent in a homeless encampment along the highway. He suffered from undiagnosed health problems and thought he’d had a stroke. He could not close one eye, and his health worsened while he lived outdoors.

He had no food, no clothes and no identification, but the problem that bothered him the most was that he had no shoes. He has very large feet, and every time he searched the donation resources for shoes, there were none in his size.

SB received a ticket and had to go to the Tulsa Municipal Court. To his surprise, he found the help he desperately needed there. He was paired with a case manager through the Special Services Docket at the Mental Health Association of Oklahoma, an OBF-funded program, and as a result, his life was changed.

SB’s case manager helped him get shoes in his size, and once he had this very basic need met, the case manager worked with him on his other goals for housing and self-sufficiency. They completed his housing application, acquired new identification documents, registered for food stamps, received donated blankets so he could keep warm in the encampment and got him clothing and more shoes. They also helped him get access to healthcare, and he was diagnosed with Bell’s palsy. He finally knew why he couldn’t close his eye! SB’s case manager helped him get to his doctor’s appointments two times each week to treat his eye until he reached program graduation. 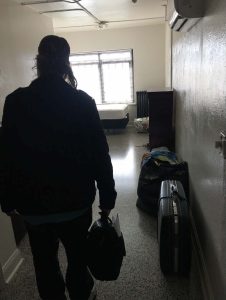 The best part is a year ago, SB moved into his own apartment. As he was moving in, he told his case manager, “I’m so glad I got that ticket. If that hadn’t happened, I wouldn’t have a home right now.”

OBF Partners for Justice help clients like SB who need special assistance to overcome barriers so they can move on to live self-sufficient lives.

Pursuant to Article IV, Section 2 of the Bylaws of the Oklahoma Bar Foundation (OBF), the following OBF members have been nominated by the 2022 Nominating Committee to serve as Trustees for first three-year terms: Todd Taylor, April Moaning and Judge Richard Ogden, all of Oklahoma City, and Bob Burke of Oklahoma City and Ryan Ray of Tulsa for second three-year terms.

Any group of 25 or more Partners for Justice (formerly Fellows) may submit the name of a member of the Foundation as an additional nominee, by submitting a petition duly signed by said Partners and submitted to the OBF Executive Committee on or before Oct. 11, 2022. Nominating petitions can be mailed to Renee DeMoss, Executive Director, Oklahoma Bar Foundation, P.O. Box 53036, Oklahoma City, 73152-3036, or delivered to 1901 N. Lincoln Blvd., Oklahoma City, 73105-4901.

2023 Officers and Board of Trustees